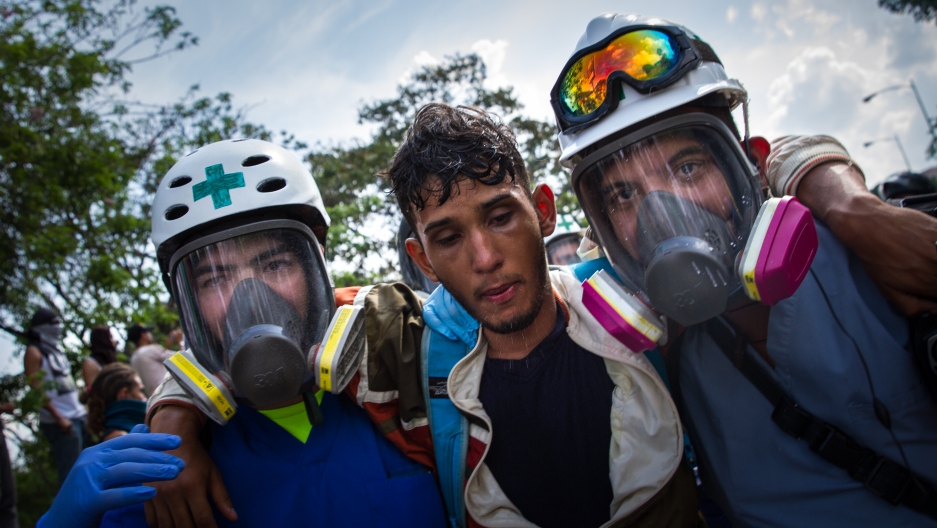 In Venezuela, two volunteers help a protester overcome by tear gas. The volunteers are mostly medical students who provide first aid at the anti-government demonstrations.

For the past month, Federica Dávila, a fourth-year medical student at the Central University of Venezuela, has been part of the biggest wave of protests in the country since 2014. But Dávila isn’t marching with signs or chanting political slogans. She’s working with a group of 60 other medical students to keep Venezuelans safe during the protests.

Their group is known as Primeros Auxilios UCV, a volunteer first-aid group of mostly medical students. They got together after a protest in 2014. This year when the protests started again, they decided to reactivate the group.

"I think [it] is the best way that I can help my country at this time," Dávila says.

Venezuela has been rocked by a month and a half of protests. Clashes between riot police and anti-government protesters have left at least 43 people dead. Hundreds of people have been injured and arrested.

The latest protests started in March after the pro-government Supreme Court tried to shut down the opposition-controlled Congress. Even though the court ultimately backed down, the protests have continued. They’ve become a way for people to vent their anger over what’s happened to their country.

Venezuela is living through one of the worst economic collapses ever in Latin America, with severe shortages of food and medicine. The shortages are so acute that the first day Primeros Auxilios UCV went out to provide aid in March, they didn't have basic supplies.

“We didn't even have gauze, cotton or alcohol,” Dávila says.

Click the player above to hear the whole story.