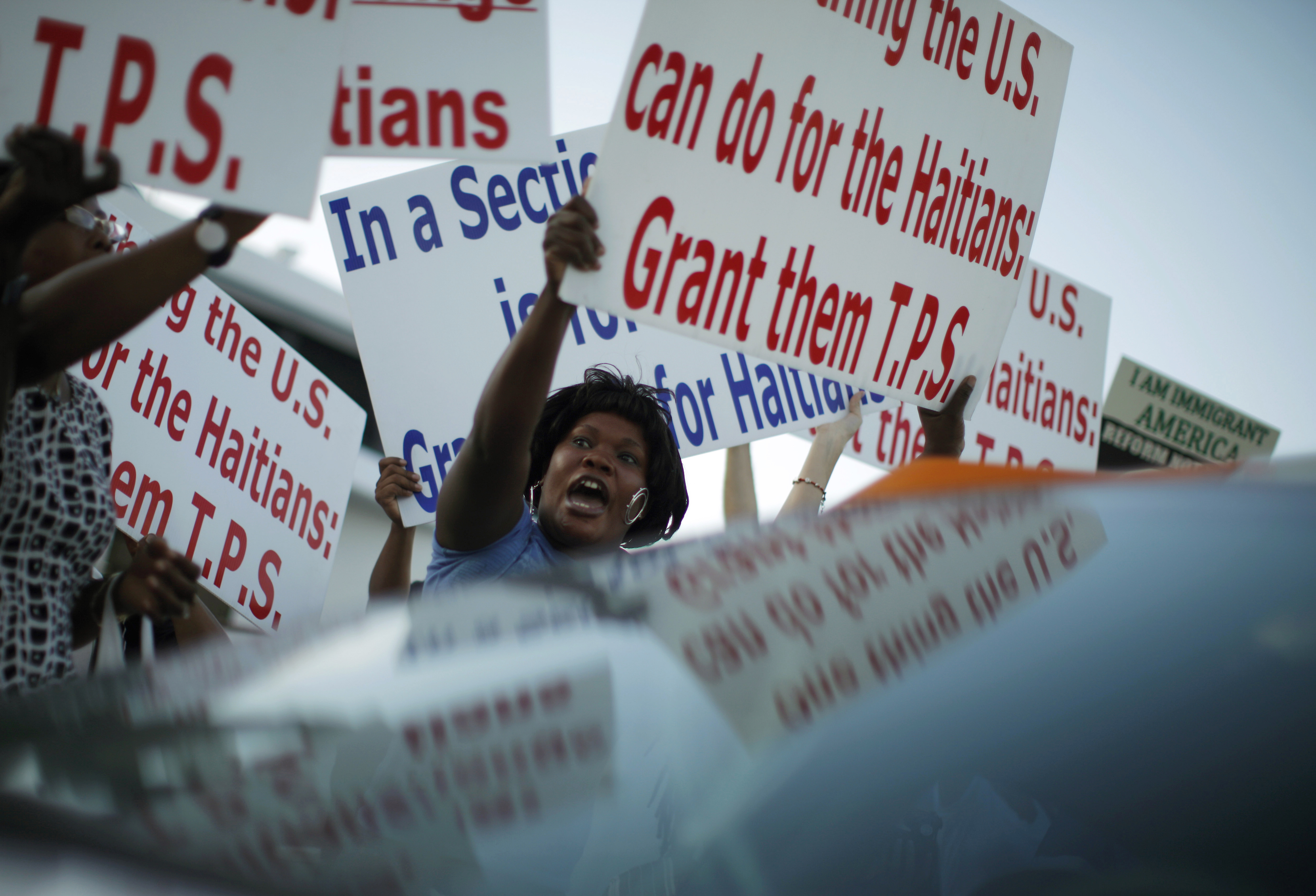 This is a rally in support of TPS for Haitian immigrants back in 2009, during a visit by former US President Barack Obama to Miami, Florida.

More than 58,000 Haitians who stayed in the United States with a special protected status since a catastrophic 2010 earthquake will be allowed to stay another six months, the Department of Homeland Security said Monday.

The Haitians were facing orders to return home in July if the department did not renew their so-called Temporary Protected Status, granted after a magnitude 7 earthquake destroyed much of the capital, Port-au-Prince, on Jan. 12, 2010.

Activists had been hoping for a longer extension — as much as 18 months — and warned that six months is not long enough for destitute Haiti to prepare for an influx of more than 50,000 people.

"How come you can send people back to where there's suffering?" asks Farah Larrieux, a Haitian immigrant on TPS living in Florida.

The quake killed tens of thousands and displaced more than 1 million people. Since then, the country has struggled to rebuild and to shore up its economy, and has contended with hurricane disasters, political turmoil and a sweeping cholera epidemic.

Critics of the extension say TPS is meant to be temporary, as the program's name denotes. But Larrieux and TPS advocates say seven years has not been long enough for Haiti to recover from its crises.

"Haiti is in bad shape," Larrieux says. "Yes, you might say that there is a new government; that doesn't mean things are good in Haiti, as a matter of fact, the numbers are there, there is famine declared and this is based on a United Nations report."

Having TPS has allowed Haitian immigrants to remain in the United States past the expiration of their visas and to work legally.

DHS officials said there are around 58,700 Haitians living in the US under temporary protected status.

Many do not have up-to-date Haitian travel documents, which has posed a problem to ending their status.

Before the extension expires next January, Homeland Security Secretary John Kelly will decide whether to grant another one or terminate it, his department said in a statement.

"I believe there are indications that Haiti — if its recovery from the 2010 earthquake continues at pace — may not warrant further TPS extension past January 2018," Kelly said. "TPS, as enacted in law, is inherently temporary in nature, and beneficiaries should plan accordingly that this status may finally end after the extension announced today."

Larrieux says US involvement in Haiti has not exactly improved conditions on the island nation.

"USAID infrastructure projects have had mixed results and faced sustainability challenges," says Larrieux, a TV personality on South Florida's Haitian TV shows. "So, that means for those that think that, well United States have been helping Haiti and we should be in a better position, but you have to understand that United States have failed Haiti. And this is a time to reconsider the involvement of the United States and what has been done."

Haitian Women of Miami, an advocacy group, said it was disappointed that the extension was only six months rather than 18.

"As we have stated numerous times, Haiti is in no position to safely absorb an additional 50,000 persons, nor to make up for the remittances that would be curtailed," the group said in a statement.

"Haitian immigrants will continue to live in fear and will be further pushed in the shadows," it added.

As part of a general crackdown on illegal immigration, the government has been deporting Haitians who do not have temporary protected status, raising protests from pro-immigrant groups.