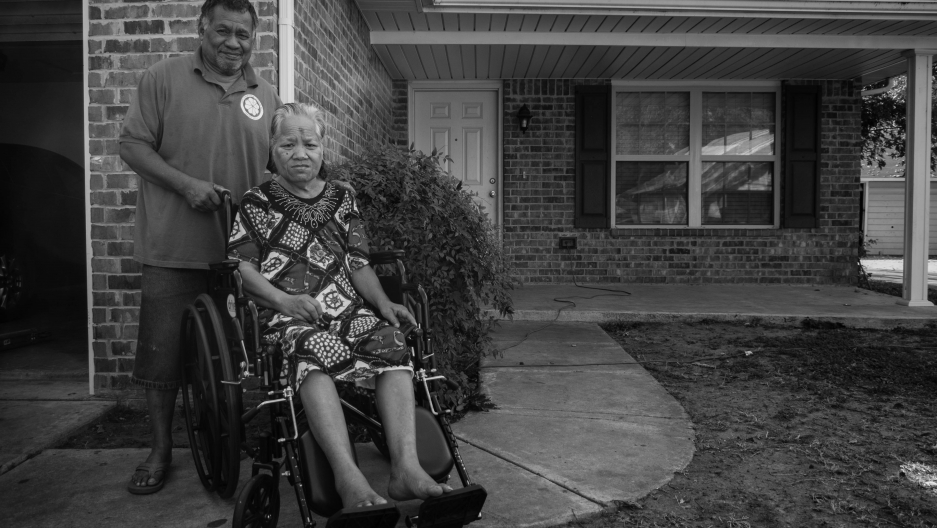 Ernest and Lenwa Joab outside their home in Enid, Oklahoma in November, 2016. In 2014, Lenwa suffered a stroke and was briefly hospitalized. Her bill came to $3,000 — low by American standards, but a fortune to the Joabs.

When I met Lenwa Joab in Enid, Oklahoma, last November, her health was already failing. She was 65, with a creased face and gray hair combed back with coconut oil. She sat silently in a wheelchair, watching her husband Ernest sweep a leaf blower across the yard of their brick rental home.

For several years, Lenwa had battled high blood pressure, diabetes, poor vision and, finally, a stroke. The effects were taking their toll. In a voice barely louder than a whisper, she said in her native language that she was tired — i mok — and needed to lie down.

Lenwa was born in the Republic of the Marshall Islands, a smattering of coral atolls in the Micronesian Pacific. During World War II when the islands were occupied by the Japanese, battles and bombs forced many indigenous people off their land. After the war, the US used some of the islands to conduct nuclear tests, dropping the equivalent of 7,000 Hiroshima-sized atomic bombs on Bikini and Enewetak between 1946 and 1958. Dozens of families were permanently displaced from their lush homelands and resettled on barren islands that lacked reefs for fishing and land for growing taro and other crops.

Without access to traditional foods, the Marshallese developed high rates of diabetes and heart disease. Nuclear fallout left others suffering from cancer and birth defects. And with more people crowding into urban centers, typhoid and tuberculosis spread. Today, thanks to a 1986 agreement that allows residents of the Marshall Islands and two other Micronesian nations (the Federated States of Micronesia and Palau) to live and work in the US without a visa or green card, those health problems have come to roost in states like Arkansas and Oklahoma.

When the compact was signed, few Micronesians had immigrated to mainland America. But in the early 2000s, migrants arrived in numbers in the American Midwest in search of better opportunities. Several of the Joab’s seven children were among them, and Lenwa and Ernest soon followed. They didn’t intend to stay — after spending time with their children and grandchildren, the couple thought they’d return to the swaying palm trees and warm weather of the Marshall Islands.

But in 2014, Lenwa suffered a stroke and was briefly hospitalized. Her bill came to $3,000 — low by American standards, but a fortune to the Joabs. Their son Frederick uses every cent of his own paycheck to support his three kids, pay rent and buy food for both families.

“People call all the time,” Frederick said. He paused to search for the right word in English: “Collections.”

When I met the Joabs, Lenwa needed insulin and other medical care. But like many Marshallese elders, she had no insurance and wasn’t seeing a doctor because of the cost. More than 56,000 Micronesian migrants currently live in the US and, although they’re legal residents who pay taxes to support safety-net programs like Medicaid, a 1996 federal law (PDF) bars them from accessing such programs.

Migrants who work full time might receive health insurance through their employer, but many are surprised that the insurance only covers their legally-recognized spouse and children. In Marshallese culture, “immediate family” extends to parents, cousins, aunts and uncles. 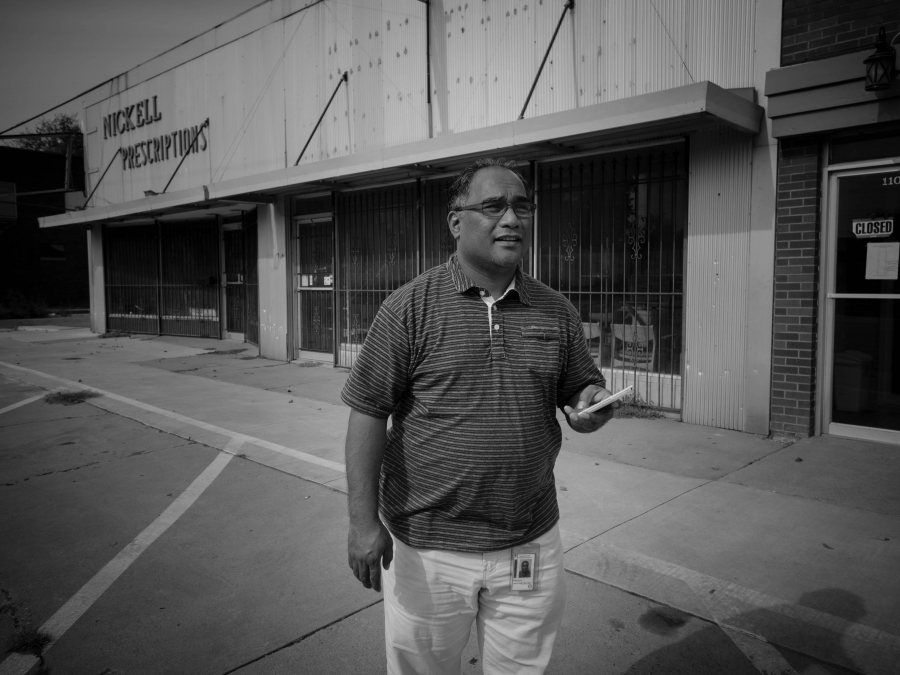 Terry Mote, Micronesian community health coordinator for the Garfield County Health Department in Enid, says there are a lot of people like Lenwa in the Midwest. In Arkansas, for instance, researchers have found that Marshallese suffer from diabetes at a rate 400 percent greater than the general population, and from tuberculosis at roughly 50 cases per 100,000 people, compared to 3 per 100,000 people in the general population.

Yet between 2000 and 2005, the Arkansas Department of Health and Human Services found that 68 percent of Marshallese with tuberculosis were uninsured and 65 percent had delayed seeking treatment for two months or more, possibly helping to spread the disease. Last summer, a mumps outbreak among fully vaccinated migrants raised questions about whether the islands’ nuclear legacy may be impacting immunity in ways not yet fully understood. Some health professionals are also concerned that the islanders’ shared historical trauma — the years of nuclear testing and the threat of rising sea levels — may be impacting mental health.

“Access to health care is a huge issue,” says Micheal Duke, an anthropologist at the University of Memphis who studies health disparities among Micronesian populations. At least two other states with large Micronesian populations, Hawaii and Oregon, offer migrants access to state-funded health benefits similar to Medicaid. In March, Arkansas Gov. Asa Hutchinson signed a bill (PDF) offering those benefits to children and pregnant women. Oklahoma also offers health care for pregnant women and children. Though several bills aimed at expanding Medicaid access have been introduced, none have passed.

“It’s frustrating,” says Duke. “Even though the Marshallese are a drain on health care costs because so many are uninsured, there’s still this concern about immigrants getting something for nothing.”

In Enid, a volunteer-run clinic is trying to fill in the gaps, but services are limited. After Lenwa Joab was hospitalized again in December for complications related to her diabetes, she began visiting the Enid Community Clinic to receive help with insulin. For a while, the Joabs were hopeful that their matriarch had turned a corner.

But on May 5, Lenwa died. Her funeral was held on a clear, warm day at the Marshallese Assembly of God church. Terry Mote, the health coordinator and a family friend who attended the service, vacillated between sorrow and anger: Had Lenwa been able to afford regular doctor’s visits, he believes, her health might not have deteriorated so quickly.