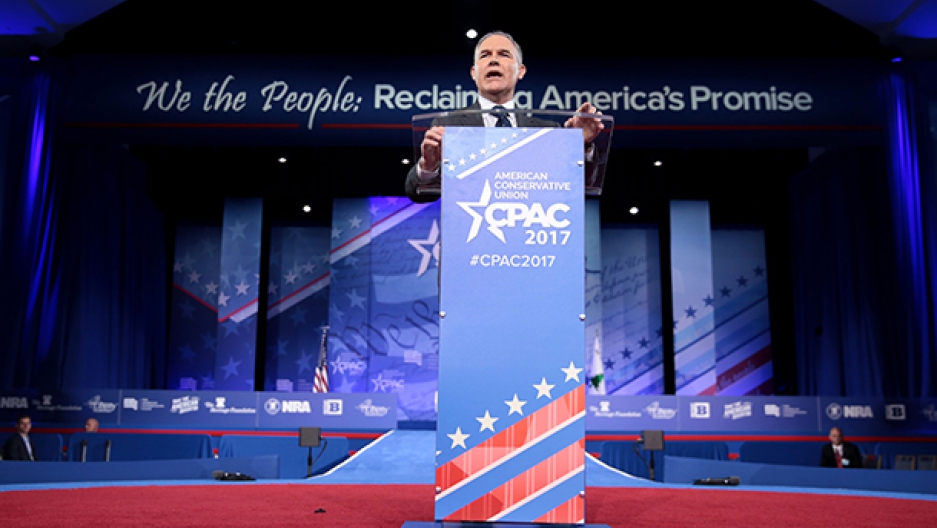 Scott Pruitt, the administrator of the Environmental Protection Agency, is pictured speaking at the 2017 Conservative Political Action Conference.

Scott Pruitt, President Donald Trump’s choice to head the Environmental Protection Agency, is already under fire from both sides of the aisle, especially regarding carbon pollution and climate change.

Progressives and environmental groups are horrified that Pruitt has denied the human link to climate change, and conservatives are already saying that Pruitt hasn’t done enough to undo the EPA’s “regulatory overreach.”

“Scott Pruitt offered this promise of rolling back the EPA to unprecedented levels, and that's actually a really challenging prospect for him,” says Mother Jones Washington reporter Rebecca Leber. “Conservatives have been hoping for someone like him at the helm of the EPA for years, and they have a very long wish list of what they would like to see.”

Their number one goal is to scale back the EPA's role in climate change, Leber says, but to do that, Pruitt would have to reverse the agency’s "endangerment finding," which he has so far been unwilling to do. This has infuriated many conservatives.

Under the endangerment finding, the EPA identified carbon dioxide and other greenhouse gases as pollutants that pose a threat to human health and the welfare of the US and the world. It is the scientific and legal basis for all of the EPA's work on climate change, including its regulations on vehicle, aircraft and power plant emissions. “Conservatives recognize that this poses a big legal challenge for them in taking the EPA out of the equation on climate change,” Leber says.

Leber points out, however, that Pruitt has said he doesn't see any evidence for reviewing the endangerment finding “at this time.”

“The phrase ‘at this time’ is key, because he seems to be leaving the door open for potentially revisiting it in the future,” she says. “That also could just be language that is meant to appease some of his critics on the right. It's hard to know at this point. … Environmental lawyers have argued that it’s because he sees that it’s a losing case already, even though he waged a lawsuit over this as attorney general of Oklahoma.”

There are plenty of other ways that the Trump administration can weaken the EPA, Leber notes, some of which they have already begun doing. “One of them is through budget cuts. Another is by limiting staffing and setting up obstacles for the daily work that the agency does,” she explains.

A trove of emails released just before Pruitt’s confirmation revealed his close ties to the industries he is now tasked with regulating. In some cases, Pruitt used language written for him by oil industry lobbyists in his letters — sent on official Oklahoma state letterhead — protesting the actions of the EPA under President Barack Obama.

“People are digging through his emails and records, myself included, to discern what that relationship is,” Leber says. “At the rate it's going, we could expect more to come out.”

Pruitt is even under investigation by his own agency. His public comments denying the science that underpins the reality of global climate change may have violated EPA's own integrity policy, which requires that employees "shall not knowingly misrepresent, exaggerate, or downplay areas of scientific uncertainty associated with policy decisions."