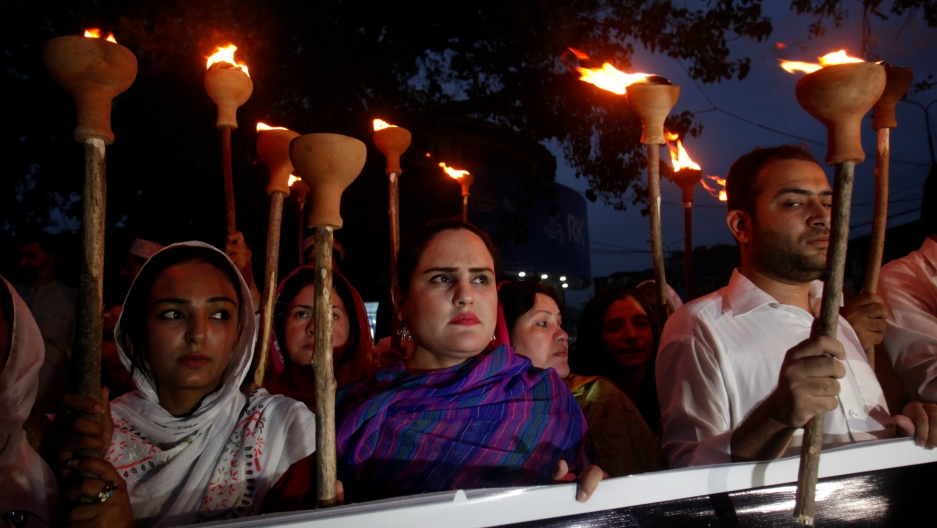 Protesters gather to condemn the killing of university student Mashal Khan, after he was accused of blasphemy, during a protest in Peshawar, Pakistan, April 20, 2017.

Mashal Khan was studying journalism at Pakistan’s Abdul Wali Khan University in the northern city of Mardan when rumors began to spread around campus that he’d posted “blasphemous” content on Facebook. On April 13, a mob of angry students dragged the 23-year-old out of his dormitory, beat him with wooden planks and stones, and shot him to death.

“April 13 was an unlucky day for every single person who believes in humanity,” said Iqbal Khan, the victim’s father and a local poet. “Mashal was a tolerant man. Those who were close to him knew he was a humanist in a true sense. I only appeal to the government for justice. My son may never come back, but may his memory live on forever.”

Khan was known for holding progressive views. On the walls of his dorm room he put up images of Karl Marx and Che Guevara, and wrote slogans like, "Freedom is the right of every individual."

Videos of his killing were recorded and posted online within minutes. The sight of young people on a university campus violently murdering a fellow student with such impunity fueled national and international outrage.

Prime Minister Nawaz Sharif condemned the lynching. “I am shocked and saddened by the senseless display of mob justice that resulted in the murder of a young student,” he said. “No father should have to send his child off to be educated, with the fear of having him return in a coffin.”

But some critics say Sharif, who has been a strong backer of Pakistan’s controversial blasphemy law, shares the blame for Khan’s death. 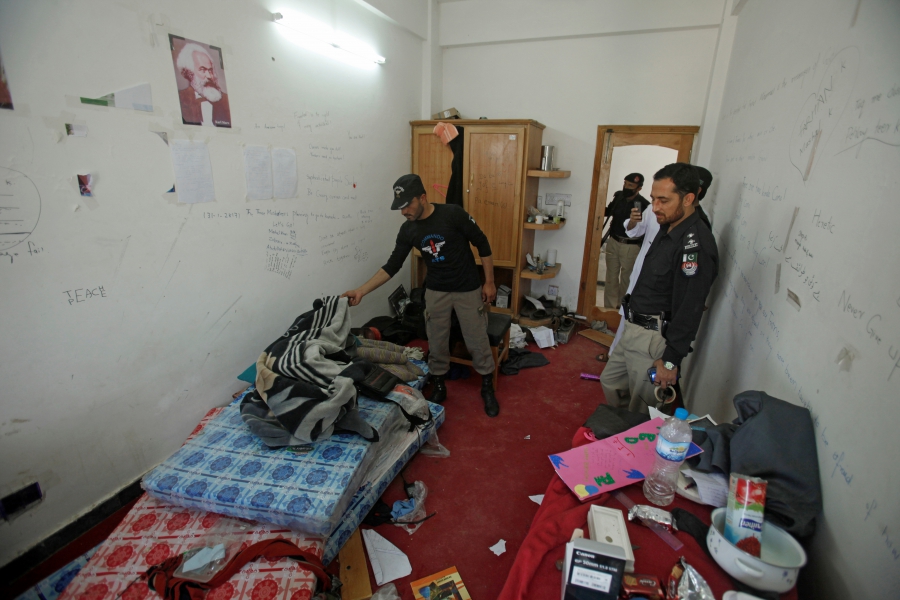 Police search the dorm room of Mashal Khan, accused of blasphemy, who was killed by a mob at Abdul Wali Khan University in Mardan, Pakistan, April 14, 2017.

For decades, the blasphemy law — which bans a wide range of infringements, including desecration of the Quran and defaming the Prophet Mohammad — has been used to persecute Christians, Hindus, Ahmadis and other religious minorities, according to rights groups.

But now the government stands accused of using the law as a weapon to suppress dissent. In March, Sharif ordered Pakistani authorities to remove or block blasphemous content on social media and to “strictly punish” those who run afoul of the blasphemy law. Some Pakistanis say it’s all an attempt to crack down on free speech, including support for secular democracy and human rights.

Authorities arrested three bloggers in March for promoting secularism and atheism. Other Pakistanis have faced blasphemy allegations after speaking out against intelligence agencies harassing journalists, condemning extrajudicial disappearances, and participating in anti-government rallies and other forms of civil disobedience.

“The state has weaponized the blasphemy law,” said Ahmad Waqass Goraya, 35, an activist jailed earlier this year for alleged blasphemy. “The law has always been used to settle personal vendettas by the common people but now the state is using it as a tool to silence dissent.”

Goraya was detained along with four other human rights activists and bloggers known on social media for expressing liberal views. The activists ran a citizen journalism blog called Citizens for Secular Democracy and a Facebook page that featured political satire lampooning the Pakistani military. A complaint was filed with the Islamabad police accusing them of committing blasphemy. The government released them after four weeks. 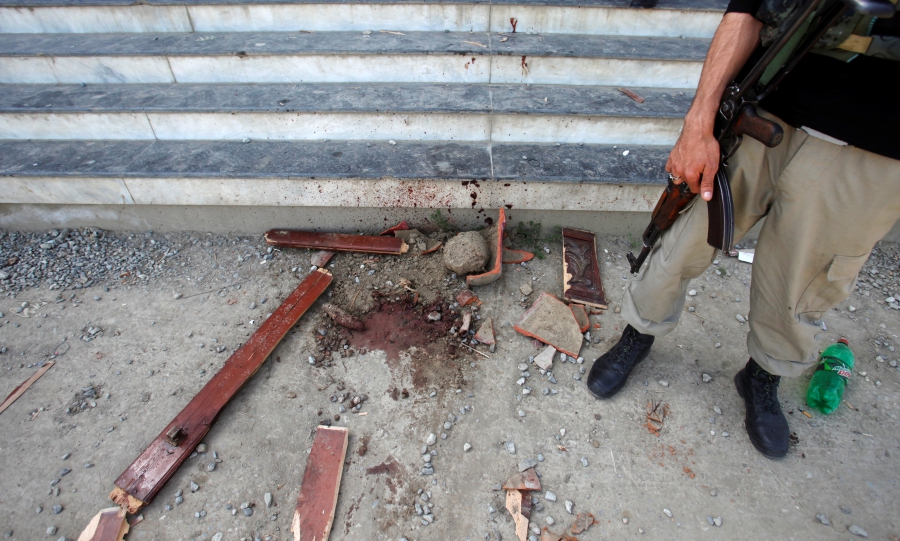 A policeman stands guard over evidence at the entry to the dorm where Mashal Khan, accused of blasphemy, was killed by a mob at Abdul Wali Khan University, in Mardan, Pakistan, April 14, 2017.

When the government moves to “strictly punish” citizens for blasphemy, activists say it sends a signal to Pakistanis that anti-blasphemy vigilantism is OK. They point to several recent cases making headlines in the country.

In April, three women killed a Shiite man, Fazal Abbas, in the northeastern village of Nangal Mirza. Abbas fled to Belgium 13 years ago when he was first accused of blasphemy, but he’d returned to Pakistan to clear his name. The women were arrested and convicted of murder. They’re awaiting sentencing.

The same month, a mob attacked a mentally disabled man inside a mosque in Chitral in northern Pakistan after he was accused of uttering blasphemous remarks following Friday prayers.

And in early May, a mob stormed a police station in southwest Pakistan to lynch a Hindu man, Prakash Kumar, who’d been arrested for allegedly sharing a blasphemous picture on WhatsApp. A 10-year-old boy died in the resulting chaos. Police arrested about 25 people but later released them.

“The state has somehow allowed a free hand to mob justice as opposed to court justice,” said Mohammad Waseem, a political scientist at the Lahore University of Management Sciences. “There are numerous cases of lynching such as … the Christian couple who were thrown into a brick kiln. We have not heard about the perpetrators of these violence crimes being brought to justice.”

“There is widespread social acquiescence to violence in pursuit of the perceived sacred causes,” he added. “There is growth of hate against ethnicity, religion and caste which is deeply inculcated in the minds of youngsters.” 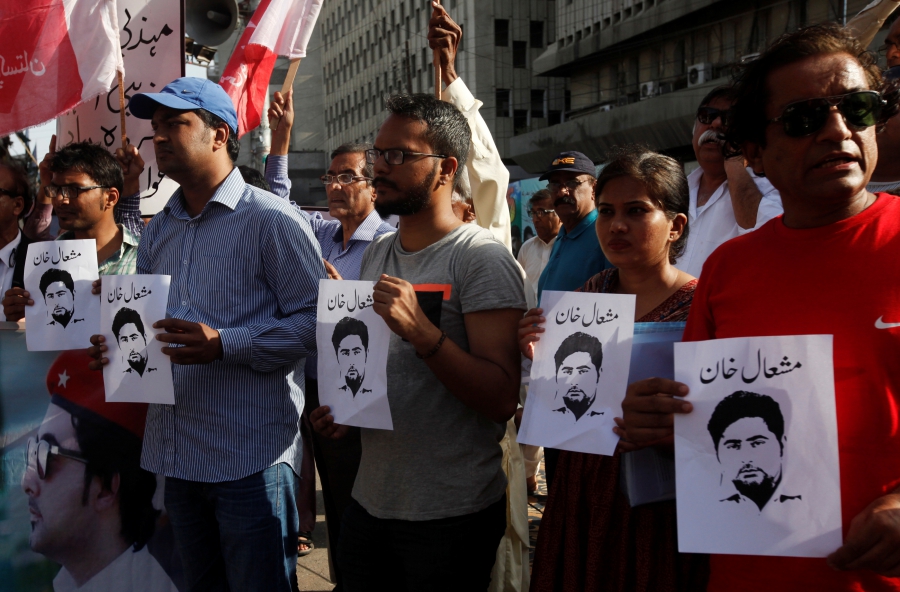 Members of the Awami Workers Party hold pictures with the name of student Mashal Khan during a demonstration in Karachi, Pakistan, April 18, 2017.

“Half of the crowd didn’t even know what Khan was being accused of,” said Abdul Wali Khan University student Mirwais Khan, 20, who is unrelated to Mashal but who witnessed the lynching. “Some students and teachers started a rumor that he was running blasphemous pages on Facebook, others provoked by saying that during a debate on religion with other students Khan shared his un-Islamic views.”

“The state has weaponized the blasphemy law. The law has always been used to settle personal vendettas by the common people but now the state is using it as a tool to silence dissent.” — Ahmad Waqass Goraya, 35, an activist jailed earlier this year for alleged blasphemy

“The state’s abject failure to protect Mashal Khan’s right to life has created great panic and horror among students and academia,” the commission said in a statement. “Unless all those who played any part in Mashal’s brutal murder are brought to justice, such barbarity will only spread.”

Khan’s father said Pakistanis needed to treat each other with respect rather than impose beliefs on one another.

“I know justice will not bring my son back,” he said. “But I urge all political parties, for your children’s sake, and mine, let’s become one. There is light at the end of the tunnel, I believe it.”