Migrants look out toward the Maltese island of Gozo, as the boat the Phoenix makes its way toward Italy after rescue operations off the coast of Libya, on May 5.

Last year was the deadliest on record for migrants crossing the Mediterranean Sea to Europe. But 2017 is on course to be just as high.

An estimated 1,344 people have been reported dead or missing at sea so far this year, while about 53,000 made it across, according to the United Nations.

The total number of migrant crossings is down dramatically compared to the same period in 2016, when close to 200,000 made the full journey. But the death count is virtually the same. 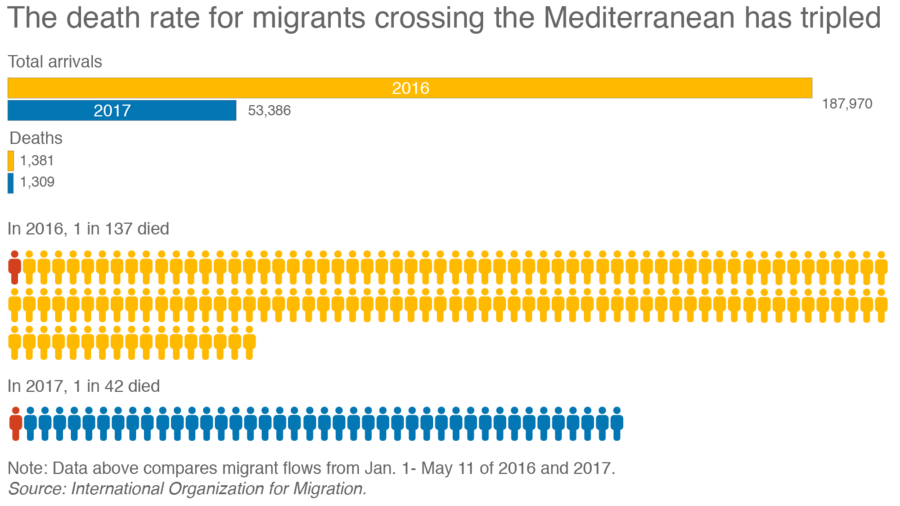 One reason is that more people are taking the longer, riskier central Mediterranean route, from the coast of war-torn Libya to Italy. There was a 33 percent increase in people taking this route from January through April, compared to the same period last year.

The much safer and shorter sea crossing from Turkey to Greece has been largely closed off since a controversial deal between the European Union and Turkey in March 2016.

Not only that, traffickers in Libya are filling flimsy boats with a greater number of people to make more money — an average of 100 to 150 people per vessel. The boats cannot take the strain of all those passengers and many fall apart or capsize.

Libya is the main transit point for people traveling from across North Africa to reach Europe. Reports of abuse, torture and sexual violence against migrants are commonplace in the country, carried out by smugglers and authorities alike.

All of this amounts to a perilous journey from start to end for desperate people fleeing instability, poverty and war.

There simply aren’t enough rescue missions operating in the Mediterranean.

Since the EU cut back its rescue operation in 2014 to focus on deterring migrants from trying to reach Europe, NGOs and volunteer groups have stepped in to fill the gap. But they face an overwhelming task.

The international charity Save the Children says it has rescued more than 3,500 people this year from the Mediterranean Sea. Five-hundred of them were unaccompanied children.

Its ship — the Vos Hestia — is equipped to carry around 300 people on its deck. A little over a week ago, it made its biggest rescue of the year, taking more than 500 people on board.

“Until the EU provides safe and legal routes to Europe, both for those in need of international protection and for other migrants, people — including children and families — will continue to risk their lives to reach Europe,” says Gillian Moyes, Save the Children’s search and rescue team leader aboard the Vos Hestia.

“The root causes are complex and many but our response is simple: We must stop children drowning. The Mediterranean Sea cannot continue to be a mass unmarked grave for children.”

Commenting on the recent drownings, earlier this month United Nations High Commissioner for Refugees Filippo Grandi called for a “redoubling of efforts to solve conflicts, especially in Africa; and using development resources much more strategically to reduce poverty, to mitigate the effects of climate change, and to support countries hosting large numbers of refugees, as well as transit countries.”

“This is a matter of life or death, which appeals to our most basic sense of humanity and should not be called into question,” he added.

Richard Hall reported this story in the Mediterranean from aboard the Vos Hestia, a boat chartered by Save the Children for their search and rescue operations at sea. You can follow along on Instagram and watch his recent Facebook Live video below.