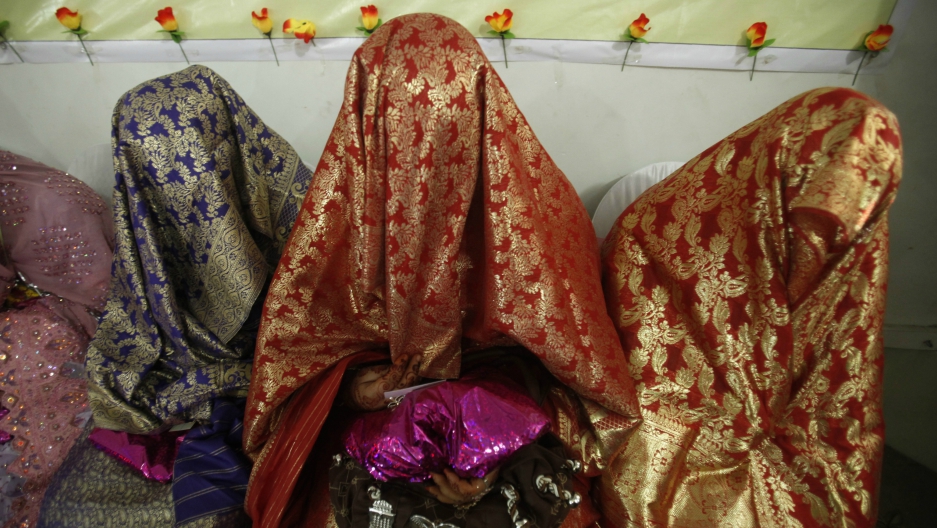 Brides sit together during a mass wedding ceremony in Peshawar, Pakistan, April 25, 2014.

A local council of elders in Jacobabad, Pakistan, ordered Muhammad Hashim Khoso to give away his two daughters, 8-year-old Fehmida and 2-year-old Sughra, and to pay a $12,500 fine in February.

The council, known as a jirga, called for the transaction after the elders found Hashim’s brother guilty of committing adultery with a married woman. Hashim’s daughters would be given as compensation to two men from the woman’s family.

“I am a poor laborer,” Hashim said. “I was about to lose my daughters for no fault of mine. It was my brother’s case, and the jirga asked me to pay [the] fine because he was having an affair with a married woman.”

The sentence ordered by the council was one of the hundreds of incidents known as vani that are estimated to occur annually in central Pakistan. Also known as swara and sangchatti, the 400-year-old custom involves fathers offering girls as young as 1 for arranged marriages to repay debts and settle tribal feuds and vendettas.

Human rights workers are concerned that the practice of vani is on the rise — an assessment based on local police records, regional media reports and direct work with victims. But there’s hope that a new civil mediation system approved this year by the Pakistani government could help.

“Children taunt me and tell me that I will get married to a man older than my father. I don’t like to be reminded about that incident every day but that’s all people say when they look at me." — Saneeda, 6 years old

Vani is illegal in Pakistan, but the perpetrators are rarely prosecuted. Jirga proceedings aren’t recorded and villagers often won’t admit to witnessing or participating in them. And yet the custom of vani is strictly adhered to in some conservative rural communities, where the jirga's word is de facto law.

Pakistan is a signatory to the UN Convention on the Rights of the Child that prohibits child marriages but the commitment is seldom honored, experts say.

The international advocacy group Girls Not Brides estimates that 21 percent of women in Pakistan marry before the age of 18 — an estimate that includes vani cases. Most are from traditional families in the country’s remote provinces. The Pakistani government doesn’t keep statistics on child marriage.

Samar Minallah Khan, an anthropologist and documentary filmmaker based in Islamabad, says at least 28 cases of vani have been officially reported in Pakistan since January 2016. But she thinks the actual number of cases is much higher.

“Earlier, the practice would take place as a tradition, a custom,” Khan said. “But now that people are becoming aware of the fact, it is being seen as a criminal offense. They try to practice it discreetly.” 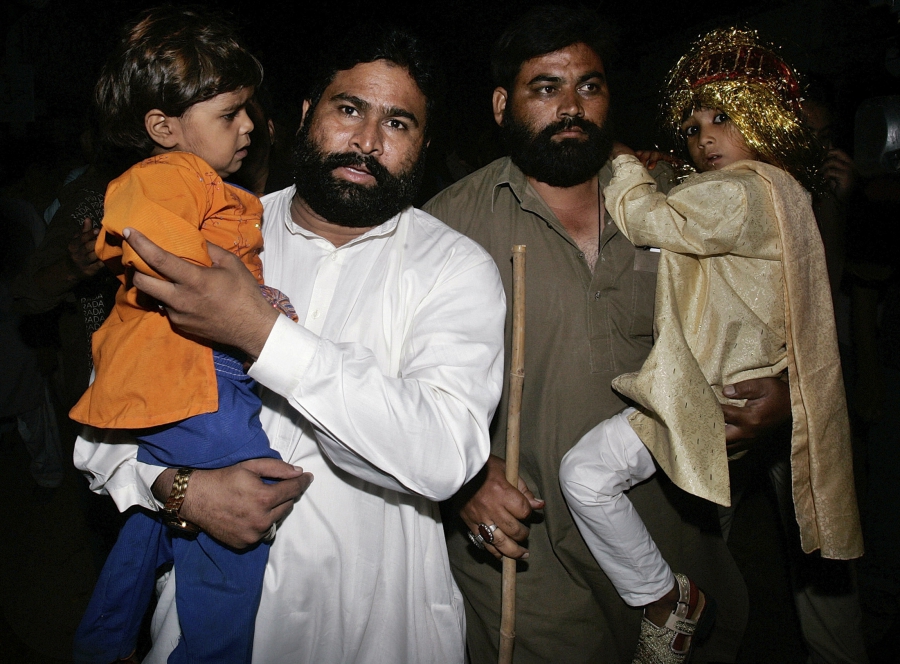 A 7-year-old groom (R) and his 4-year-old bride (L) are escorted by security officials at a police station in Karachi after Pakistani police raided a child marriage ceremony and arrested a cleric who was presiding over the wedding, Oct. 31, 2008.

Pakistan’s state-administered justice system can step in to prevent vani, but only if news of the jirga order actually gets out.

Hashim and his daughters got lucky. A local media report about the jirga’s ruling reached the chief justice of Pakistan’s highest court, Mian Saqib Nisar. Police arrested three members of the jirga that issued the vani order and filed charges against others who were present. Hashim did not have to pay his fine, and his daughters remained at home.

In another case, the chief justice prevented a vani order from being carried out in Ghotki, in central Pakistan, after Ali Hassan Mazari told authorities in January that a jirga was taking his daughter away.

“Some powerful men of Mazari tribe held a jirga and decided that if I don’t pay the fine of $4,600, my daughter is to be given in marriage,” Mazari said. “I asked for the protection of my daughter and legal action against the jirga.”

In another case this year, a jirga in the Neelum Valley, near the Indian border, ordered the marriage of a 3-year-old girl to a 9-year-old boy to settle a dispute between the children’s fathers. One father, Mohammad Younis, had accused the other, Muhammad Aurangzeb, of cheating with his wife. Younis demanded $4,700 to absolve Aurangzeb of the alleged misconduct, and then allegedly bribed local police to jail his rival.

“That is when the jirga gathered and got my daughter married to Younis's son to settle the dispute,” Aurangzeb said.

Local police said that six out of the 15 people who participated in the Neelum Valley jirga have been taken into custody. Three of the six arrested include Younis, the girl's grandfather and the cleric who solemnized the marriage.

Pakistan's government is trying to institutionalize systems that could help stamp out the practice. In January, lawmakers approved an out-of-court settlement process that might curb vani ceremonies by taking civil dispute remediation out of the hands of jirgas. Parties can agree to settle their differences through a neutral, government-appointed mediator. Otherwise, the case goes to the courts.

Khan says government monitoring is probably the only way to reform the jirga system, but others warn that Pakistan should be careful about meddling in tribal governance and traditions.

Tabassum Adnan, who heads Pakistan's first and sole female-only jirga — one she founded in the Swat region in north-central Pakistan to stop abuse of women and girls — says the country must keep its traditions while ensuring justice.

“I don’t agree with those who say that jirga system should be dismantled because that’s not practical,” Adnan said. “People need structures to solve their issues. We need to reform the jirgas.” 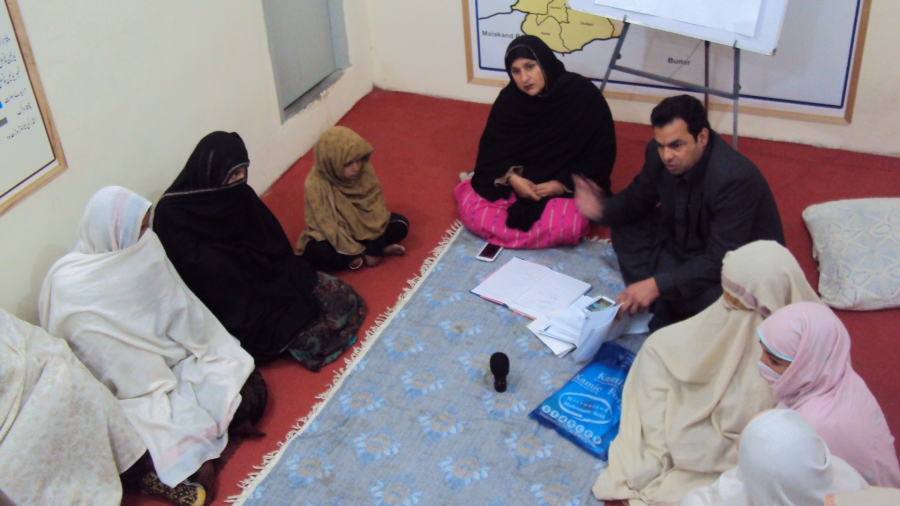 Tabassum Adnan (face pictured) leads a women’s jirga in the Swat Valley in northern Pakistan. Along with a male attorney, she is advising the group as women detail crimes against them such as robbery and physical abuse.
Credit:

Pakistani officials have been more active in preventing vani in recent months, perhaps due to growing attention in social and mainstream media, but for those who have escaped their sentence, it can be hard to put the episode behind them.

In Swat, 6-year-old Saneeda and her cousin avoided arranged marriages to her stepmother’s relatives.

“Saneeda’s mother came to us for help — she wasn’t ready to comply with the decree made by a male Jirga,” Adnan said. “But the pressure increased with every passing day to give her in [vani].”

But now Saneeda faces discrimination and bullying in school.

“Children taunt me and tell me that I will get married to a man older than my father," Saneeda said. "I don’t like to be reminded about that incident every day but that’s all people say when they look at me. I want to concentrate on my education.”