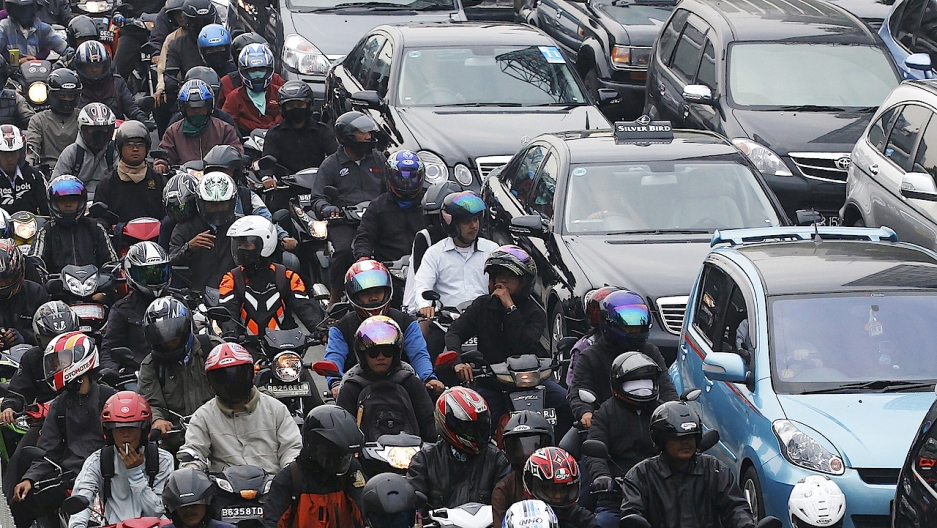 Google, Tesla and others promise to unleash some of the most revolutionary technology of the early 21st century: vehicles careening autonomously down highways, their digital scanners deftly identifying potential danger.

Pretty neat — if you live in California. But most people don’t. The typical driver on planet Earth must contend with hazards, human and animal, that simply do not exist on most American roads.

Like sprightly goats. Or 12-year-olds pushing vegetable carts down the center of your lane. Or a never-ending cavalcade of motorbikes veering so close to your car that the windows rattle.

Or on a bad day, all of the above.

In America and other wealthy nations, great hype surrounds the coming driverless car revolution — and much of it is warranted. But there has been little analysis of autonomous vehicles’ future (if any) in places such as India, Vietnam, Brazil or other major non-Western nations.

All evidence suggests that it could be difficult to transplant driverless car technology designed for the West to many places around the globe. Driving in America just isn’t comparable to the blood-sport traffic in certain tropical megacities.

Holidaymakers cruise the Pacific Coast Highway for pleasure. Traffic in Jakarta? That’s a gauntlet of pain.

We asked two experts — one specializing in tech, the other in policy — to speculate on autonomous cars’ future in the developing world.

James M. Anderson is an analyst with the RAND Corporation, a California-based think tank. He has extensively studied the policy implications of driverless cars.

Here are a few of their observations:

“In a city like Kolkata, nobody follows [traffic] rules,” Chowdhury says. “They don’t obey lane markers. They’re constantly switching lanes … often driving within inches of the next car.”

This actually describes big-city traffic in much of the developing world. Even the most sophisticated autonomous cars currently being road-tested would fail in these environments, according to Chowdhury.

The car probably wouldn’t end up in a flaming accident. “It just wouldn’t move at all. It would be too timid,” he says. “You’d be stuck in traffic forever.”

Driverless cars are rigged up with an array of sensors that scan the road with radar, ultrasonic and laser waves. If there’s an object in close proximity to the car, it usually won’t move — and there are often humans or rival vehicles crowding around your car in cities such as Kolkata.

At this point in time, autonomous vehicles are programmed with algorithms that drive quite conservatively. “That wouldn’t work,” Chowdhury says. “The artificial intelligence would have to be more aggressive and take risks.”

Greater dangers might await any autonomous vehicle that managed to gather speed. The vehicles would have to learn the difference between regular potholes and massive craters, which often plague roads in nations such as India.

“If you’re driving at 60 miles per hour, and you’re not identifying the terrain properly, you could easily drop into a big hole,” Chowdhury says. “That’s the main risk.”

3. In theory, you can design driverless cars to handle almost any road

The autonomous car revolution traces its origins back to America’s Defense Advanced Research Projects Agency, or DARPA. This is the secretive Pentagon branch that helped give rise to drones and the internet.

Starting in 2004, DARPA began offering millions of dollars in prizes to engineering teams that could create driverless cars to race in the desert.

“Modern autonomous cars developed, in part, because of DARPA,” Anderson says. “They tried to create vehicles with true autonomy. They called for cars operating on dirt roads, not only on pavement."

The competitions featured harsh terrain — the sort of landscape a robotic vehicle might find if embedded with foreign-deployed troops.

Many past competitors have gone on to build commercially viable driverless cars. This indicates that, if so inclined, engineers at Google or Tesla could focus on perfecting sensor algorithms suited to rutted cattle trails in China or harrowing mountain passes in Peru.

But why bother? In the near future, most potential buyers will live in well-maintained cities. “Still, in theory,” Anderson says, “vehicles should be able to cope with almost any obstacle.”

“If I wanted to prove that it’s possible to use these cars in Kolkata,” Chowdhury says, “I could probably do it. But I might need 10 engineers and many, many sensors.”

In other words, he’d need an unlimited budget — making the end product highly expensive. “No one would be able to afford it,” he says. “Also, people would probably steal the sensors.”

For the foreseeable future, Chowdhury says, anyone in India wealthy enough to buy an autonomous car would also be able to afford a full-time human driver. They’re readily available in Delhi for around $125 per month.

5. Developing countries might plan cities with robot cars in mind

Because developing countries are still, well, developing, they can give rise to nascent megacities in short order. Consider China’s Shenzhen: a tiny trading post in the 1980s, now a sprawling megacity with more inhabitants than Sweden.

In coming decades, some other foreign metropolis could adapt itself to a population that no longer clogs its cities with human-piloted cars. Anderson speculates that these cities might have narrower streets. After all,  future robot cars will presumably drive with tight precision.

It’s also widely predicted that robot cars will kill the era of privately owned cars. Instead, they’ll be shared commodities that zip around, transporting many customers, instead of remaining parked all day while a single owner is at work. These cities might also have denser downtowns that are rid of space-hogging parking lots.

Wealthy enclaves in the Middle East or Asia — such as Singapore or Dubai — may outpace the US in adopting autonomous cars. But for the most part, Chowdhury says, developers and politicians in non-Western foreign nations will wait to see how these vehicles fare in America before making any big moves.

“They’ll wait for the technology to get started in the US and then they might make a copycat,” he says. “They just don’t have the budget or the confidence to go first.”