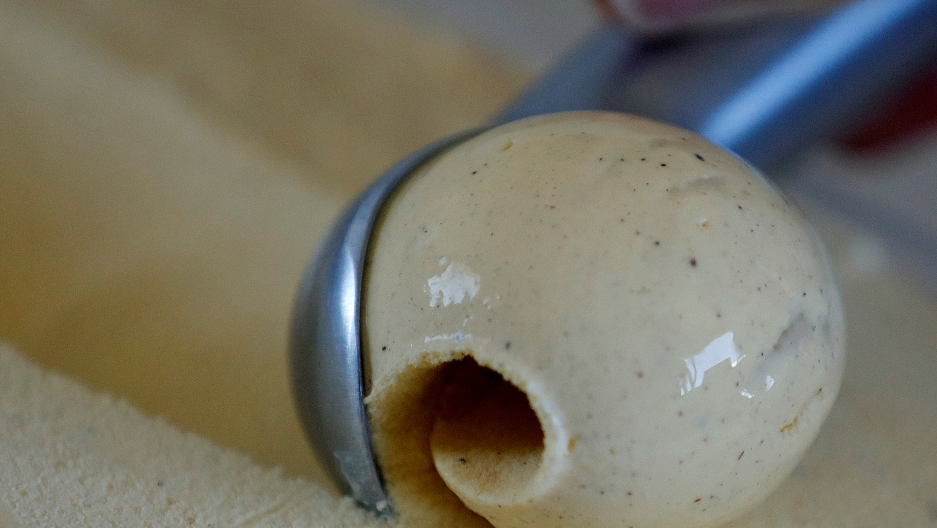 An employee prepares a scoop of ice cream at the Miko Carte d'Or, part of the Unilever group, factory in Saint-Dizier, France, May 4, 2016.

There is a good chance that the natural vanilla you use in the kitchen or the one in your ice cream came from Madagascar. The island nation off the southeast coast of Africa produces 80 percent of the world's vanilla.

But back in March, a Category 4 cyclone hit the two main vanilla-producing regions.

"You see trees that are completely bending in the wind," says Joshua Poole, who has lived and worked in Madagascar on and off for the past 15 years. "Roofs of houses, if they're not protected, are flying around and [there is] really intense rain for several days."

Eighty-one people lost their lives before it was all over. Around 6,000 others were displaced and the main source of income for the island, vanilla, was hit hard.

"Picture vanilla as a vine, growing up another tree," Poole explains. "What happens is, if there are high winds from the passage of the cyclone, the high winds can rip out the support tree and of course the vine goes with it."

- Although 80 percent of the world’s vanilla comes from Madagascar, that’s not where it first grew. The first record of vanilla use comes from pre-Columbian Mayan societies in the Americas. Some reports say the earliest growers were the Totonac people, of modern-day Veracruz, Mexico.

- For years, people could not understand why vanilla wouldn’t grow in Europe. Then in 1836, Belgian horticulturist Charles Morren identified vanilla's natural pollinator: the Melipona bee, an insect that didn’t live on the continent.

- The unlikely hero of modern vanilla production is a man named Edmond Albius, a slave-turned-botanist who lived on the Indian Ocean island of Réunion. In 1841 he developed a technique to manually pollinate vanilla flowers. His method is still used today.

The cyclone has created uncertainty and speculation in the global market, which has left people wondering: Will there be enough beans? Will the quality suffer as a result of shorter time spent on the vine?

In consequence, vanilla prices have gone through the roof.

Gus Rancatore, owner of Toscanini's Ice Cream, says he first noticed the surge in prices when he was looking through invoices. A gallon of vanilla extract that cost him about $90 last year, now costs $400. That's an increase of almost 350 percent.

“The first thing I thought was, maybe they made a mistake," he says. They hadn't.

“Everybody who I know in the restaurant business is talking about this right now," explains Rancatore, who uses a lot of vanilla in his ice creams. "This sudden surge in the price of a key and common ingredient is something that people talk about.”

Some of the vanilla Rancatore uses is imported by Nielsen-Massey Vanillas, one of the top 10 companies in the world of pure vanilla production.

“We deal all across the industry,” says Craig Nielsen, one of the third-generation owners of the company.

He says the price surges that we see now go back to before the cyclone hit Madagascar.

"Companies such as Nestlé and Hershey's have been stating that they're going to eliminate artificial ingredients from all their products and go to natural ingredients," he says.

So the demand for pure, natural vanilla grew but production has been slow to catch up.

High-quality vanilla is extremely hard to produce. There's a reason why it's the second-most expensive spice in the world, after saffron. It takes three to four years for just the vine to grow. Once they're mature enough, the vanilla orchids bloom. The flowers open only for a few hours and they must be hand-pollinated. Add in the possibility of natural disasters — like the cyclone in March — or diseases, and you can see what the farmers are faced with.

Nielsen says his company relies heavily on the vanilla bean production in Madagascar and has told customers it won't process unusually big orders.

"In other words, they can order what they ordered in the past," he says. "But we can't accept any additional quantities until we get a much better handle on the supply as we move forward."

Rancatore, of Toscanini's in Cambridge, Massachusetts, says he has enough vanilla to get him through the next month. That's it. He's already thinking ahead and says he might take some flavors off the menu or tweak recipes to use less vanilla.

"Now we're at our busy season," he laments. "It's spring and soon will be summer and suddenly we're dealing with this situation." 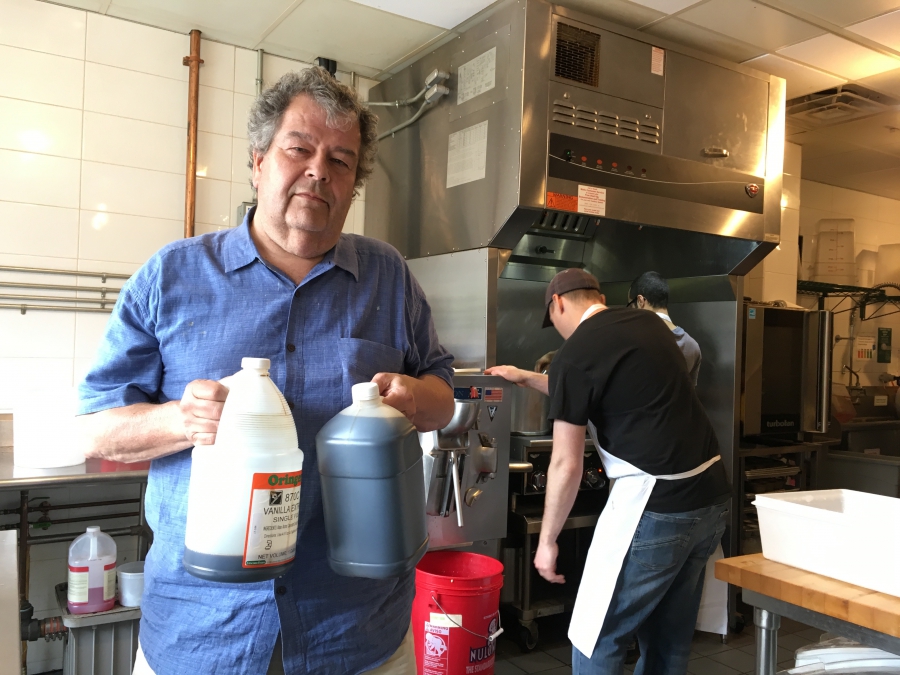 Gus Rancatore, owner of Toscanini’s ice cream, holds some of the vanilla extracts he has left.

Meanwhile, Patricia Rain, owner of The Vanilla Company, has the growers in Madagascar on her mind. She says a lot of them are poor and she wants to see a base price for vanilla, "so that they could at the least be able to send their children to school, get medical care for their families, have enough food that the families thrive and have shoes for the children," she explains.

Rain has spent three decades in the vanilla industry. "I'm known pretty much worldwide in the regions where vanilla is grown as the Vanilla Queen," she says. "I often receive emails that begin 'Dear Vanilla Queen.'"

She doesn't take her royal title too seriously but what she does worry about is the future of crops such as vanilla.

"How many of us think 'Gee, this cup of coffee I'm drinking this morning was grown by somebody in the tropics who worked very hard to make sure I have quality coffee beans,'" she says. "We don't think that way. We just reach for the coffee."

Unless there are no more coffee beans — or vanilla ice cream — to cool us on the upcoming hot summer days.