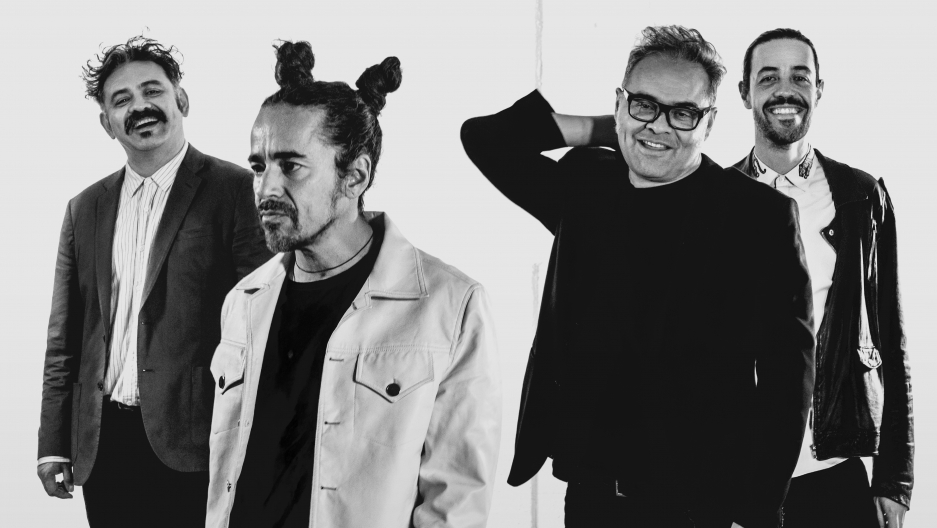 Oh, and the “v” in Tacvba is pronounced like a “u.” (It's a long story, involving a famous Mexico City restaurant.)

The second thing to know about “Jei Beibi” is that it’s not really a rock album. There are lots of musical styles packed into its 13 tracks. Some "rock en Español," some Latin alternative, and there are a few thoughtful slower tunes and a couple of tracks that defy any labeling.

Asked if the label “Mexican rockers” even applies to them at this point, singer Rubén Albarrán and keyboardist Emmanuel “Meme” del Real said they’ve never defined themselves as a rock band.

“I believe that rock [has to] do more with an attitude than with a sound,” he continued. “When you say we are rockers, you just get into your mind a sound. But I think that the best way to define Café Tacvba is to listen to [our] music, and each one of the listeners will have [their] opinion.”

Which might just be another way to say the band has evolved over its 28 years together. They started as young punks; now, they’re more mature and into different things. Band members recently told Rolling Stone about their history of experimenting with different sounds.

Del Real says "Jei Beibi" is about the freedom to find a new sound or idea and just go with it. And some of the tracks definitely reflect the fact that the band members are, well, pushing middle age now. (Sorry guys.)

On the song "El Mundo En Que Nací," for example, the lyrics are about a child being born and giving the parent a reason to keep going, and about the world that child will inherit.

As the band has evolved and experimented over the past three decades, their fans have changed, too.

“Our audience has been changing even from the start of our career,” said Albarrán. “We had [a] very violent, aggressive punk audience in the beginning. And now we have all kinds of audiences. We can see youngsters and we can see elders and very small children.”

Albarrán said this new variety in their fan base extends to nationality. As members of the “rock en Español” elite, Café Tacvba has followers all over Latin America, but also among Latinos in the United States. So when the band plays in US venues, people in the audience tend to have roots all over the Western Hemisphere.

That includes “a lot of people that came to this country [the US] with their music, with their culture,” said Albarrán. “And maybe they are far from home, maybe they cannot go back. And their culture, their music seems to keep them closer to their people, to their land. So they’re very emotional shows, and we love to play here.”

That emotion Albarrán mentioned can sometimes get intense. Del Real recalled one Café Tacvba show in Atlanta where the fans were especially fired up. It was like a riot, he said. And then things got weird.

“There was this guy that jumped onto the stage and then tried to get rid of the security guys and then jump again into the crowd, like, for two or three times,” said del Real. “But at a certain point, he went up and he just took [lead singer] Rubén [Albarrán], and he just grabbed him and he just jumped into the crowd with Rubén. And we said, ‘What the...?’”

The other band members didn’t know what had happened, for a few seconds. Then it turned out both the lead singer and the fan were OK.

Del Real said the incident was an example of the kind of energy and passion that Café Tacvba fans bring to the band’s live performances. “It’s just the way they have to release all this energy, all these feelings, all this nostalgic thing that they have. And we are pretty much the soundtrack of a celebration,” he added.

“We feel very agradecidos, very thankful, to be in that part of the heart of the people, en el gusto de la gente,” Albarrán said.

Café Tacvba will be back on tour in the US this fall.