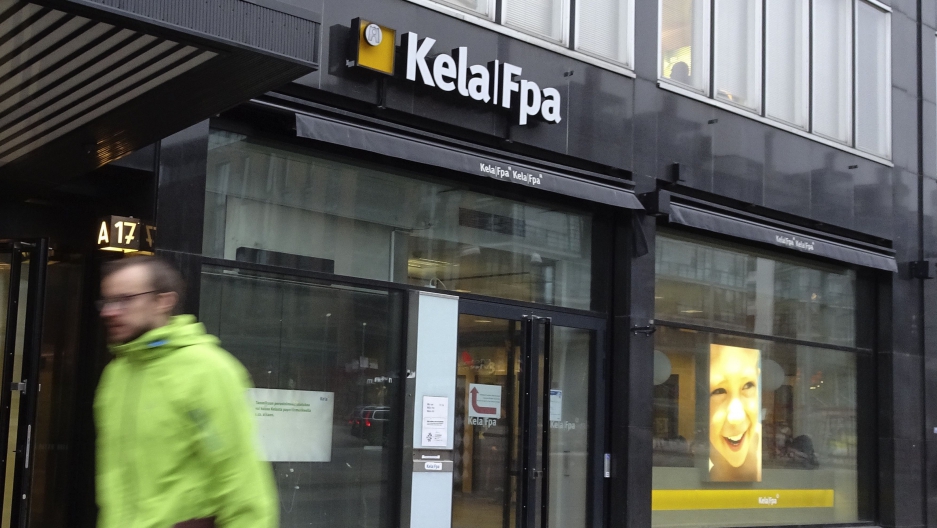 An office of Social Insurance Institution KELA, is pictured in Helsinki, Finland, on Jan. 17, 2017. Finland became the first country in Europe to pay free basic income in a pilot which evoked enthusiasm around the world — but which at home meets criticism for its design, costs and lack of fiscal realism.

In several corners of the world, nonprofits and governments are introducing guaranteed basic income.

Entire villages in Kenya have been receiving a basic income through a charity program, there's a small test initiative in the Netherlands, India is considering it, and Canada is rolling out a basic income pilot program in several cities in Ontario this summer.

But it’s Finland that may be the farthest along. This Nordic nation launched a basic income experiment in January. Every month, the country gives $600 to some 2,000 unemployed people between the ages of 25 and 58. Each will receive this monthly financial stipend, unconditionally, for two years.

Kela, Finland's social security institution, is running the pilot program. Marjukka Turunen is the director of change management for Kela, and she is in charge of executing this program. She’s hoping it will take on poverty head-on.

“The main goal is to see if this kind of basic income mechanism in [the] social security system will tackle the problem,” she says. “Of course, the $600 isn’t that big of [a sum of] money, and of course they won’t survive with that the whole month, depending on whether they have children or not, but the idea is that they can be sure of this $600 per month.”

It’s up to each of the basic income recipients to determine how they spend the funds they get from the Finnish government — as of right now, there are no restrictions.

“Of course we don’t know how people will use the money if they have unemployment benefits, so that’s the same system in this basic income [structure] also,” Turunen says.

“It replaces basic unemployment benefits, the sickness benefits and the parental benefits in this experiment,” she says. “We want to see if this kind of mechanism reduces the bureaucracy. Also, when people’s status changes — when they get a baby or they go and study or whatever, they don’t have to apply for another benefit, they stay in this experiment. But mainly it replaces the basic unemployment benefit.”

The Finnish government determined that the basic income allotment should be €560 or $600 because it is what is usually provided when individuals receive unemployment benefits.

“If [you] were to give people $1,500, there would be no incentive at all to go and seek out jobs for many people because you can easily survive with that here in Finland,” Turunen says. “We tried to figure out the amount that would be accurate and enough for these people to seek out jobs but not passivate themselves for staying at home and just not doing anything.”

She continues: “But the idea here is to give these people this financial security so that they can free their minds and not worry all the time about the money, the basic needs. They can now fulfill them with this basic income, because the problem in our unemployment benefit system — it’s not worthwhile for you to take on, for example, a part-time job because we have incentives, traps in our social security system that sometimes, when you take on a part-time job, you get less money into your hand than you would if you [were on] full unemployment benefits.”

According to Turunen, the individuals who are receiving this guaranteed basic income have reported feeling lower levels of stress because they’re able to take care of their minimum needs.

“There was this one woman who said, ‘I was afraid every time the phone would ring, that unemployment services are calling to offer me a job,’” says Turunen. “She said that she cannot take on a job because she’s taking care of her elderly parents at home. This experiment really has an indirect impact, also, on the stress levels [of people] and the mental health and so on.”