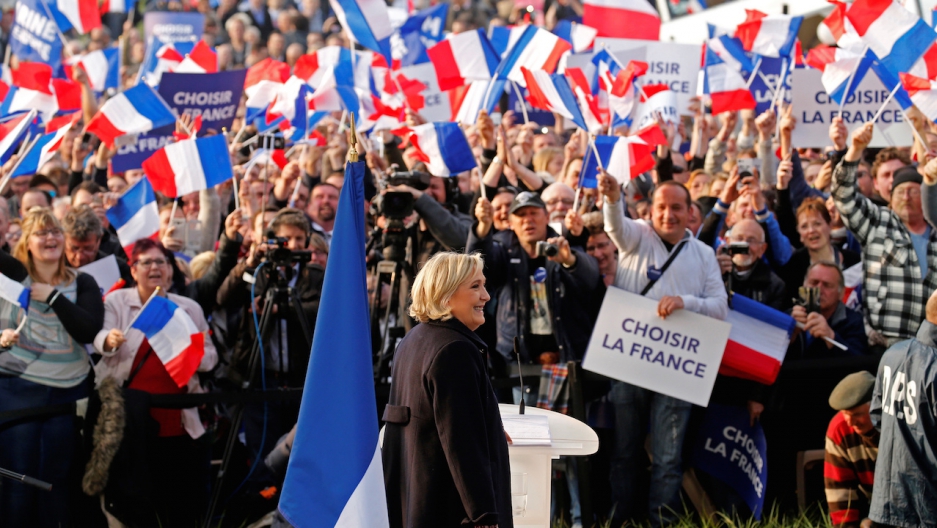 Days after the first round of the French presidential election in April, an anonymous user on the messaging board 4chan waged war — “total meme war,” that is — against centrist candidate Emmanuel Macron.

“We must bombard French social media with pro [Marine] Le Pen propaganda, to remind the French who is on their side,” the user wrote.

Hundreds of users commented in support of the campaign. Many of them "had been very active during the US presidential election and ... took consistently strongly right-wing views, particularly anti-Islam views," said Ben Nimmo, a senior fellow for information defense at the Atlantic Council's Digital Forensic Research Lab, who's been studying these efforts and their reach.

But their efforts don't appear to be resonating with French voters.

And some of it included images that could be deemed especially offensive by French audiences, like images intertwining Le Pen with Pepe the Frog, a meme that came to be associated with the extreme far-right during the US presidential election.

This Sunday is drawing closer and so is the freedom for France! Votez pour Marine Le Pen! pic.twitter.com/q4ndUWWdA5

"If you think of the English language connotation of referring to the French as frogs — it's not complimentary, and the French are aware of it," Nimmo said. "Marketing anything in a different country, in a different language, in a different culture is hard work. And frankly, the alt-right is not usually known for its cultural sensitivity."

Other social media generated by English-speaking alt-right internet users to influence the election has also largely failed to gain traction in France. According to a review by The New York Times, "more than one-third of posts linked to certain political hashtags originated from the United States, although few went viral in France." The French academic who conducted the Times review also found that about two-thirds of Twitter messages using the hashtag MFGA (Make France Great Again) originated in the US.

"The irony is that much of alt-right is strongly nationalist and strongly anti-globalization. And what it's doing in these campaigns is trying to act as an international and globalized effort to support nationalist and anti-globalist people in other countries," Nimmo said. "Right there, there's a philosophical problem."