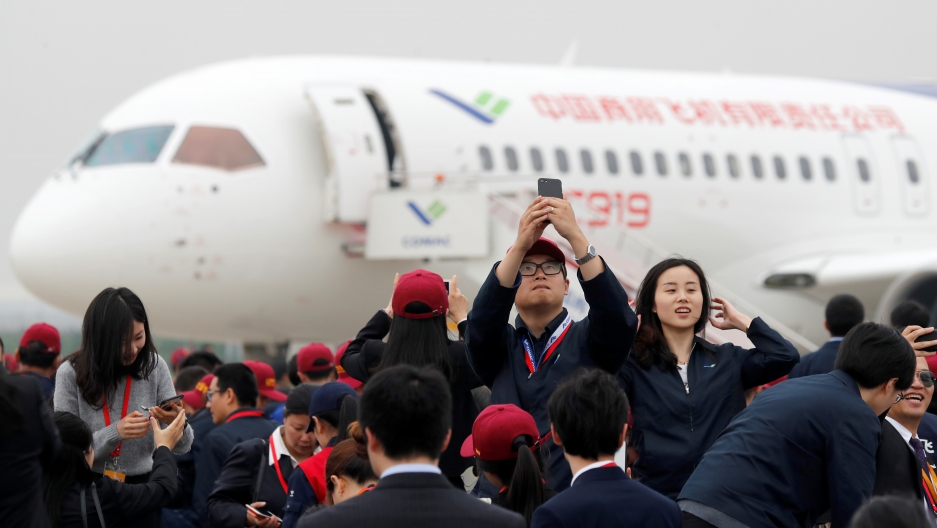 Attendees take photos in front of a Chinese C919 passenger jet after its first flight at Pudong International Airport in Shanghai.

Thousands of workers, government officials and aviation enthusiasts gathered to cheer as China's C919 passenger plane touched down at Shanghai's international airport Friday after its maiden trip to the sky.

State media broadcast the test flight all across the country, and Chinese officials heralded it as the start of a new era.

Chairman Mao Zedong tried and failed to build a commercially viable passenger plane in the 1970s, but the dream persisted. The government created the Commercial Aircraft Corporation of China (COMAC) in 2008 with this specific goal in mind.

Isaac Stone Fish, a journalist and a senior fellow at the Asia Society, said China considers the C919 a sign of its growing role in the global economy. “To be able to say ‘we're not just at the bottom of the barrel making very basic plastic parts for iPhones, but we're actually making very complicated technology,’” he said, is a narrative that resonates with the Chinese people.

"Seeing the C919 take off into the sky made me quite emotional. This is a moment we have waited to see for a very long time," Wang Mingfeng told Reuters after witnessing the flight of the 168-passenger plane. "I believe that in the not-too-distant future, we will be neck and neck with Boeing and Airbus."

Seating 168 passengers, depending on configuration, makes the C919 a direct competitor for the lucrative and ubiquitous Boeing 737 and Airbus A320 series of jets.

And COMAC is indeed setting its sights on disrupting those industry giants in the future. It makes sense. China buys most of its planes from Boeing and Airbus, and last year, Boeing predicted that Chinese airlines would spend about $1 trillion on more than 6,800 new planes over the next 20 years. Those numbers will likely grow — China’s expected to overtake the US as the world’s largest aviation market by 2024.

It’s not necessarily a bad thing that COMAC is pushing into this space, Stone Fish said. Seattle-based Boeing may take a hit, but “a lot of the high-tech manufacturing parts used in this jet come from American companies.”

They’re likely to see an increase in demand.

Still, Stone Fish says, COMAC has 20 to 40 years to go before they can realistically shake up the aviation market. The first changes are going to be domestic, as Chinese companies begin buying from COMAC instead of (or in addition to) foreign companies. “They've already said that they've gotten more than 500 orders for planes.” Almost all, save two orders for a total of 30 planes, are from Chinese airlines and lessors.

The next step is likely to be in African and Central Asian markets. Those countries have more lax regulations than the United States and Europe, where certification for a new type of plane can take several years.

But Beijing has high hopes for its fledgling aerospace industry — plans to develop a wide-body long-haul jet with Russia are already in the works.