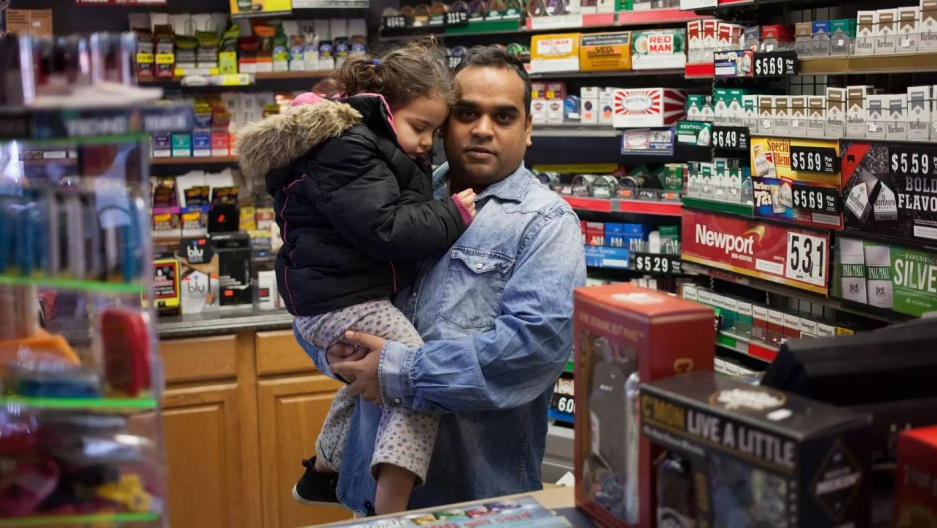 Here are a couple of the new friends Fadi BouKaram made on his US road trip to visit all the towns and cities named Lebanon. Chris, from Lebanon, Ohio, seen here holding a daughter in his arms, inside his family's gas station, says he immigrated from India to America because it's the land of opportunities.

Fadi BouKaram is a man on a mission.

The 38-year-old Lebanese photographer and blogger set out in an RV last year on an unusual road trip — or maybe you'd call it a quest. He wanted to experience and photograph America’s heartland while meeting Americans of all kinds.

But more specifically, he wanted to visit all of the US cities and towns named Lebanon.

It was a challenging itinerary. By BouKaram's count, there are 47 Lebanons scattered around the United States, though some barely show up on the map. By March, he'd managed to visit 25 of them in the states of New Hampshire, Oklahoma, North Dakota and Kentucky, to name just a few. At every turn, he seemed to stumble across interesting people in the small towns with cultural connections to his home nation of Lebanon.

After 18,000 miles on the road collecting stories and photos, BouKaram was wrapping up his tour in March. He was three days from returning his rental RV to Seattle when he pulled into Albuquerque, New Mexico.

The next morning, he woke up and ate breakfast. And then he realized the RV was gone.

Here’s what went through BouKaram's head at that moment: “I panicked because I only had my computer and my shirt. That’s it," he says. "I didn’t have anything on me — all my equipment, my clothes, my camera, everything was in the RV. So I called the cops, that’s the only thing I could think of doing and then the cops came, and they weren't really that optimistic from the sound of it." 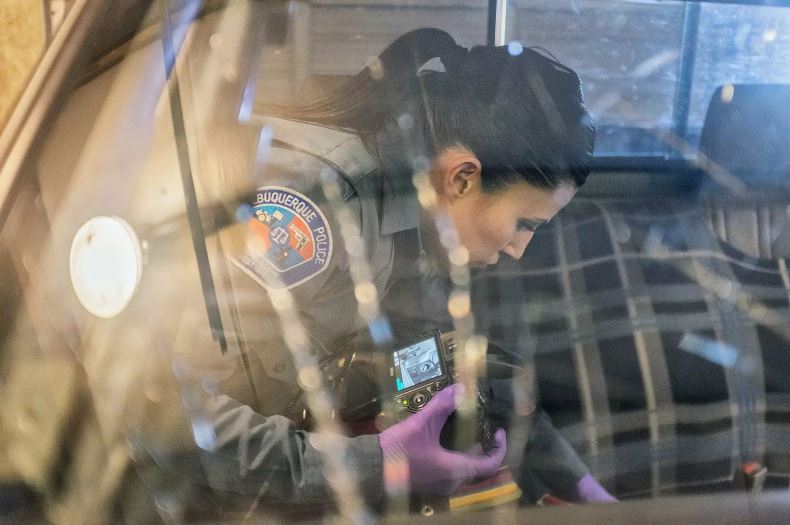 A police officer searches inside a stolen pickup truck where Fadi BouKaram's cameras and other belongings were recovered after his RV was stolen in Albuquerque, New Mexico.

Albuquerque, BouKaram was told, is notorious for car thefts. So he figured all was lost.

“But then I guess I was lucky because at about maybe 10:30 p.m., I got a call from the police and it turned out that they actually had found the RV,” he says.

The next day, he learned from police that two women, a mother, and a daughter, had stolen the RV and had tried to sell the camera equipment online just before they were apprehended.

"So I was able to recover most of my stuff," he says. "I mean, all my cameras, but all the souvenirs that I had gotten from the different Lebanons around the country, they were in a suitcase that I never found."

As for the RV, BouKaram's home away from home for most of the past year, it was impounded as evidence. The two suspects had basically converted the RV into what BouKaram says looked like a makeshift meth lab.

"The cops allowed me to be there with them and to take pictures," he says, "and they found all this drug paraphernalia … needles and heroin, it was kind of like the evidence.”

So as bad luck would have it, BouKaram ended up having to rent a car to drive to California, and from there, he flew home to Lebanon. But he says the Albuquerque episode hasn’t soured his overall impression of America, as you might expect it would.

“No, no, not really," he says. "Not at all because it could have happened in my Lebanon. It’s not like something that is particular to the United States.”

And he feels sad for the mother and daughter who stole the RV.

“To be honest, I keep thinking about that woman because she went to jail," he says. "She had left a diary in my RV that she had written, and apparently she used to live in an RV herself. It was going to be repossessed by the repo people. So one of the reasons she stole my RV is that she wanted a home to live in. So I kind of feel bad for her … she went to jail and is without a home and she has a 4-year-old kid. So I mean, there's a human story behind it. So it's not going to sour anything for me about the trip.”

BouKaram is now writing a book about his RV trip across America. He’s also planning a future return trip to the remaining Lebanons in the US that he missed the first time around. Next time, he's thinking of returning with a supply of gift saplings to hand out to the mayors of all the Lebanons he’s visited — saplings of his country’s iconic national tree, the cedar of Lebanon.