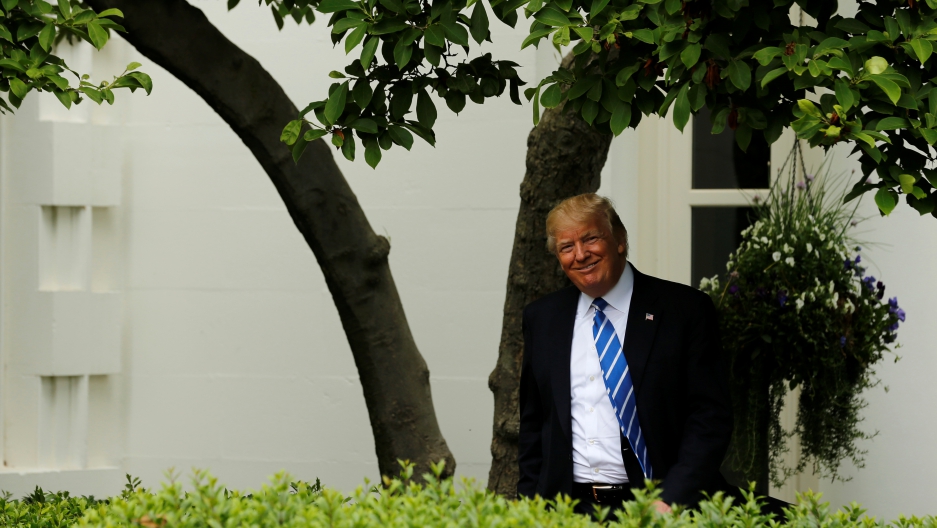 US President Donald Trump arrives to deliver remarks to members of the Independent Community Bankers Association in the Kennedy Garden at the White House in Washington, May 1, 2017.

President Donald Trump has made it clear from day one that his administration will push an “America first” policy platform. So when he announced last week that May 1 — commonly known as International Workers’ Day or May Day — would be celebrated nationwide as “Loyalty Day,” many of his critics were quick to attack the declaration as an alarming example of the president's nationalism.

But the origins of Loyalty Day actually date back to the anti-communist Red Scare of the 1920s, according to Nicole Hemmer, an assistant professor in presidential studies at the Miller Center, a columnist for Vox.com, and co-host of the podcast Past Present. She says Loyalty Day has a history that runs parallel to the original May Day.

“When it first got started in 1917-1918, it actually happened on July 4 and it was about immigrants who had come to the United States and [the holiday was used for] trying to Americanize them — trying to get them to not identify as Polish American or German American,” she says. “When you get to 1921, you’re in the middle of the first Red Scare after the Russian Revolution, that’s when ‘Loyalty Day’ gets moved to May 1.”

Loyalty Day was moved to May 1 because the date has historic associations with socialist, anarchist and communist movements around the world.

“It was a bit of counterprogramming,” Hemmer says. “When it got revived in 1947, it is explicitly put on May 1 for that reason — as an alternative to this socialist or communist May Day celebration.”

Though President Trump is providing renewed attention to Loyalty Day, it’s actually been an official US holiday since the Eisenhower administration. In recent years, presidents from both ends of the political spectrum have kept the tradition alive.

“The reaction to the news that Donald Trump was declaring May 1 Loyalty Day was pretty shocked and surprised,” she says. “I think it’s one of those days on the calendar that the only people who really notice are the presidential writing staff who have to draw up the proclamation every year. But now that it’s kind of been associated with Donald Trump, everyone is talking about it.”

While it’s getting some renewed attention in 2017, Hemmer says the Loyalty Day holiday often gains more of a focus during times of intense cultural or economic anxiety in the United States, or during times of war.

This story first aired as an interview on PRI's The Takeaway.