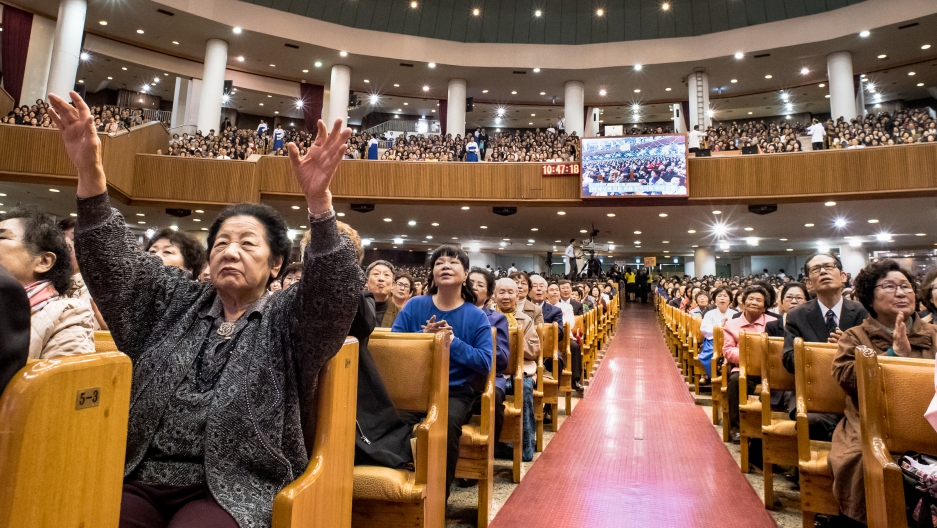 Yoido Full Gospel Church began in 1958 and grew by serving poor and working class South Koreans who moved to the capital city of Seoul. Today, it's largest megachurch in the world.

If the building didn’t have a giant cross out front, it could easily be mistaken for a sports arena.

But this is Yoido Full Gospel Church, a Pentecostal congregation belonging to the Korean Assemblies of God — a household name in South Korea. The institution is also known as the largest megachurch in the world, with a congregation approaching 800,000 people, according to church officials. 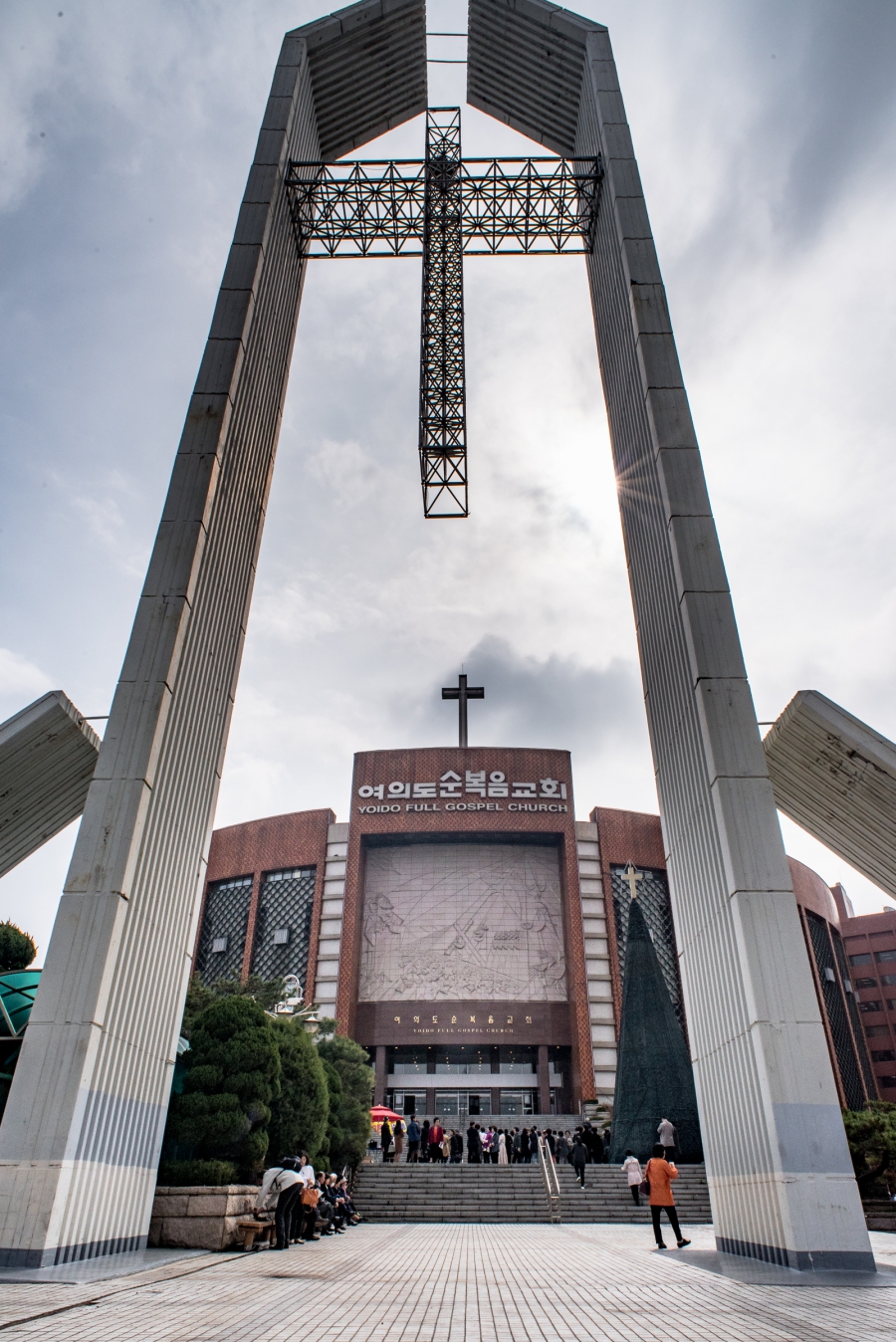 The congregation at Full Gospel Church on Yoido Island grew along with the city of Seoul. The capital city and its outskirts is now home to more than 20 million people.

Protestant megachurches, defined as those with at least 2,000 people in attendance every week, don't just operate all across the United States. This is a global phenomenon.

Successful megachurches are operating in South America, Africa and Asia as well. And yet, no city has more of them than Seoul. The South Korean capital has 17 megachurches in all.

Still, Protestant evangelical leaders in South Korea are facing a new challenge. Their public image has taken a hit in recent years due to a series of scandals, and the era of boundless growth for their congregations appears to have come to an end.

Sunday services at Yoido Full Gospel Church start at 7 a.m. and run the whole day, until 7 p.m. They’re not in the same building at the same time, but officials say nearly 200,000 people attend worship services every week at the main church in Yeouido, an island in central Seoul that sits in the Han River.

Yeouido Island is also where the South Korean National Assembly building is located, along with several big media companies.

The scene inside the main sanctuary of the Full Gospel Church is impressive. There are seats for about 15,000 worshippers. Giant video screens carry simultaneous translations of parts of the service in Chinese, Japanese and English. Audio headsets are available with translations from the original Korean into numerous other languages. The choir has about 120 vocalists decked out in white robes and backed up by a full orchestra. 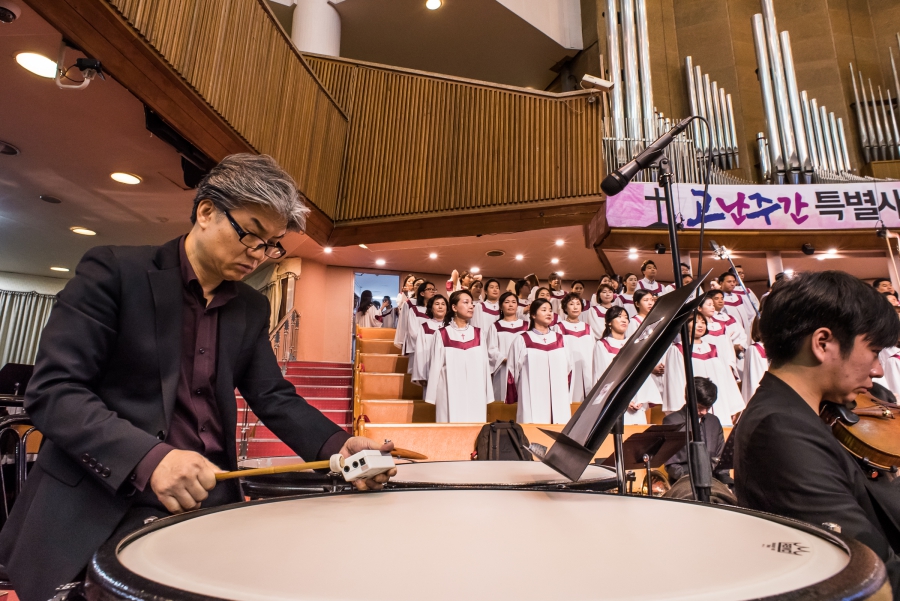 The message at Yoido Full Gospel Church is about faith, the Bible, and prosperity. The music is provided by a professional choir and a full orchestra.

Talking with members of the congregation on the main steps outside of the church, several people echo a sense of awe. They say they can feel the presence of the Holy Spirit at Full Gospel Church, and that’s what keeps them coming back.

At certain times during the service, people in the pews close their eyes, raise up their hands and even speak in tongues, creating a real revival atmosphere. 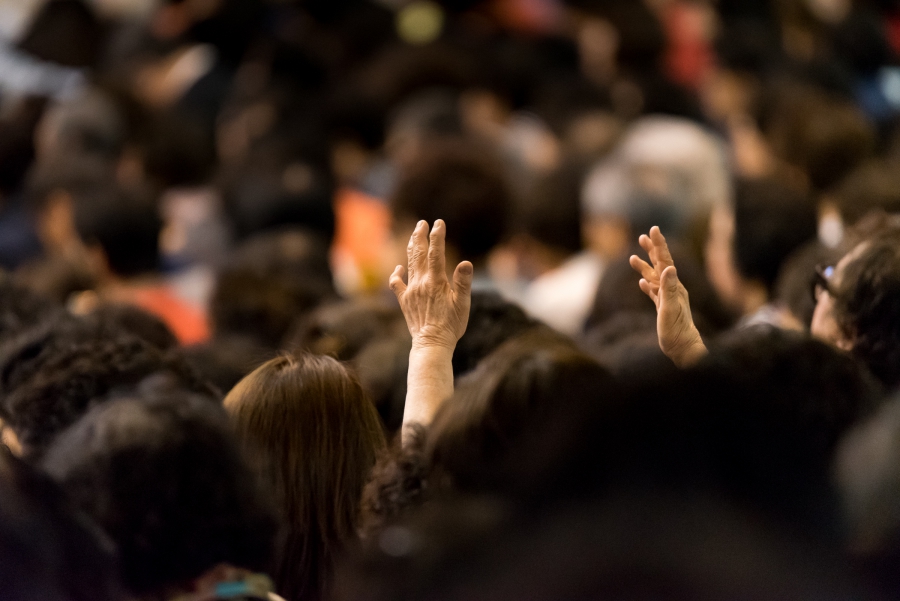 People at Full Gospel Church say they are able to feel the Holy Spirit present during services, and some say they can speak in tongues.

“When I was in my 20s, I went to another church. But it was kind of superficial,” says Lee Chong-sook, a 55-year-old attending Sunday morning service with her husband, their two young-adult children, and Lee’s sister-in-law.

“When I first walked past this church and I heard the preaching, I started to cry. It touched my soul. I felt joy and I felt healed from pain and sorrow,” Lee says.

The message from the pulpit would sound familiar to a lot of Christian evangelicals in the US. It’s about a strict interpretation of the Bible, with a focus on the power of prayer and positive thinking.

Pastor Yong-gi Cho, now retired, founded the Full Gospel Church in Seoul in 1958. It all started with simple worship services for just a few people at a time, gathered under a tent.

“So many poor people had no place to go, no job, no income. Then, I came,” Cho tells me.

“I began to give hope to them [through the Bible]. Religion is useless if religion can’t give hope," Cho says. "People began to swarm to the tent church, the poor people, they needed to have hope.”

Cho’s congregation grew and grew through the 1960s, '70s and '80s, right along with the South Korean economy. He earned a reputation as a healer. Indeed, two people I spoke with at the church tell me they were healed from illnesses.

Cho also preached a Korean version of the prosperity gospel, which taught that leading a prayerful lifestyle will bring rewards not only in terms of health, but in wealth. 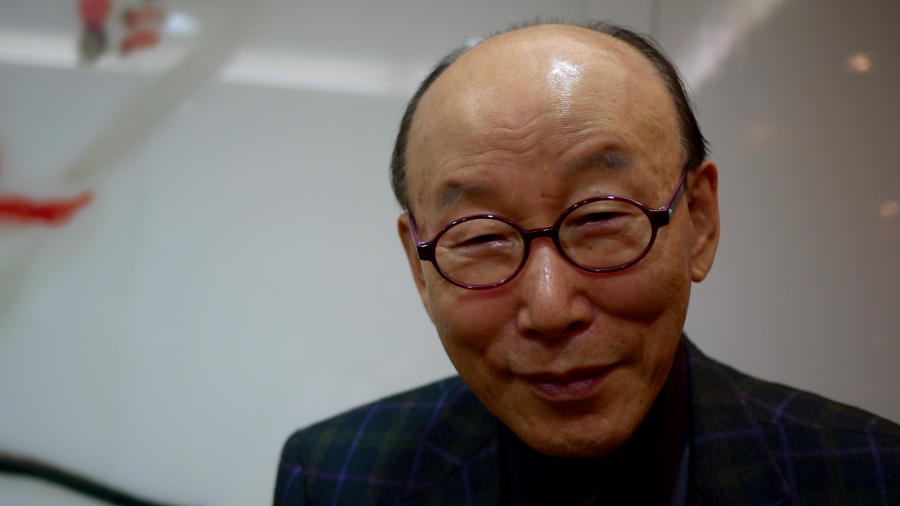 Yong-gi Cho converted to Christianity as a teenager soon after the Korean War. He says faith in Jesus saved him from malnutrition and illness. He's retired as the head of Yoido Full Gospel Church, but is well-known in South Korea.

It might not be apparent at one of the packed Sunday morning services at Full Gospel Church, but the influence of Pastor Cho and other Korean evangelicals is not what it once was in South Korea. And Cho’s own track record is one reason why.

In 2014, Cho was convicted of embezzling $12 million in church funds. He was given a suspended sentence, but Cho’s son went to jail. Other Protestant leaders have been caught up in sensational scandals too, and as a result, people’s attitudes toward Christian evangelicals have soured.

“The general public in Korean society, they do not trust Christians anymore,” says Jung-Jun Kim, a senior pastor at a small evangelical church in Seoul.

About 30 percent of the population belongs to the Christian faith, with about one-quarter of those being Catholic and three-quarters Protestant. But Kim says there is a crisis in South Korean evangelism, with many people deciding to leave the more established Protestant churches to join smaller ones.

“Or, they just leave the church altogether. Because they say, ‘I can be a Christian without belonging to an institutionalized church,’” Kim says. 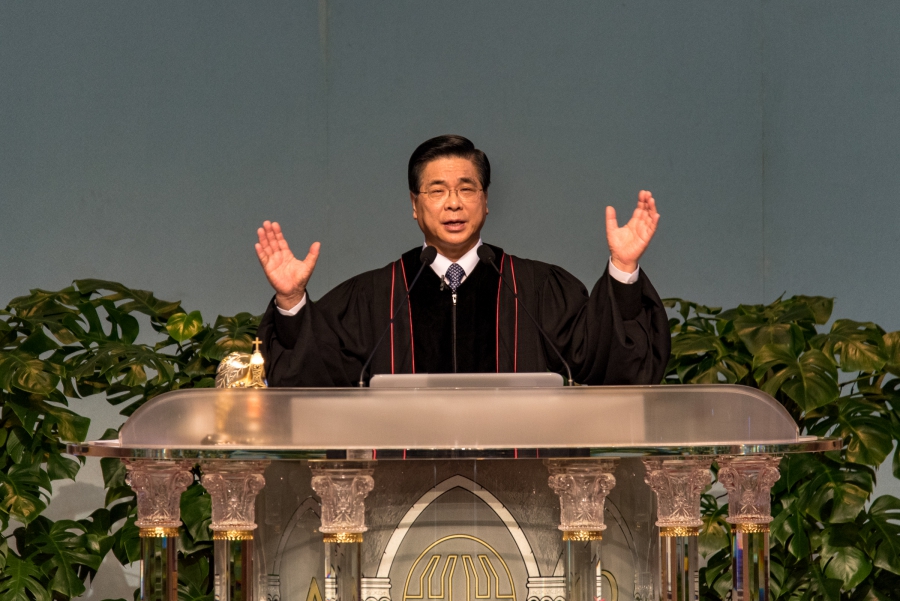 Young-hoon Lee is senior pastor at Yoido Full Gospel Church. He says some people worry about growth of Protestant churches in South Korea, but not him. He believes that the power prayer will help churches continue to grow.

There is a new generation of Christian leaders, Kim adds, trying to come up with different ways to attract disaffected believers. He says they’re even opening up so-called café churches. These are places that double as coffee shops and a places of worship.

“Right now, we have a little slowdown and stagnation period,” he says.

Lee describes himself as a fourth-generation Korean Christian. His grandfather preached the Gospel in Pyongyang, North Korea, back before the Korean War. And Lee says he is not particularly worried about the future growth potential of the Christian faith.

“We are going to have another great awakening and revival in Korea, because I believe Jesus is coming soon,” he says.

During a recent sermon, Pastor Lee prays for North Korea, which can only survive if people there believe in Jesus. Then he mentions the prosperity of South Korea, pointing to the rising average income and saying that it’s because people in the South still believe. 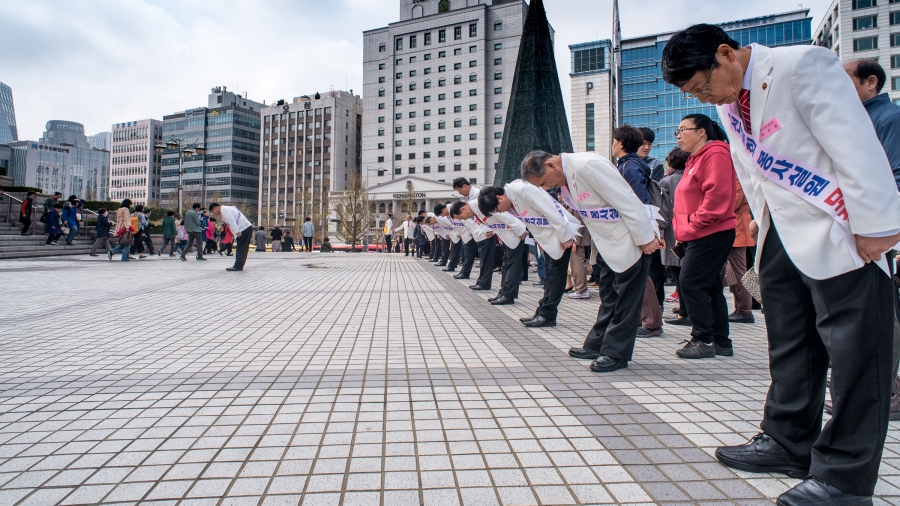 Ushers outside of a recent Sunday service at Yoido Full Gospel Church bow as worshippers begin to leave the church.