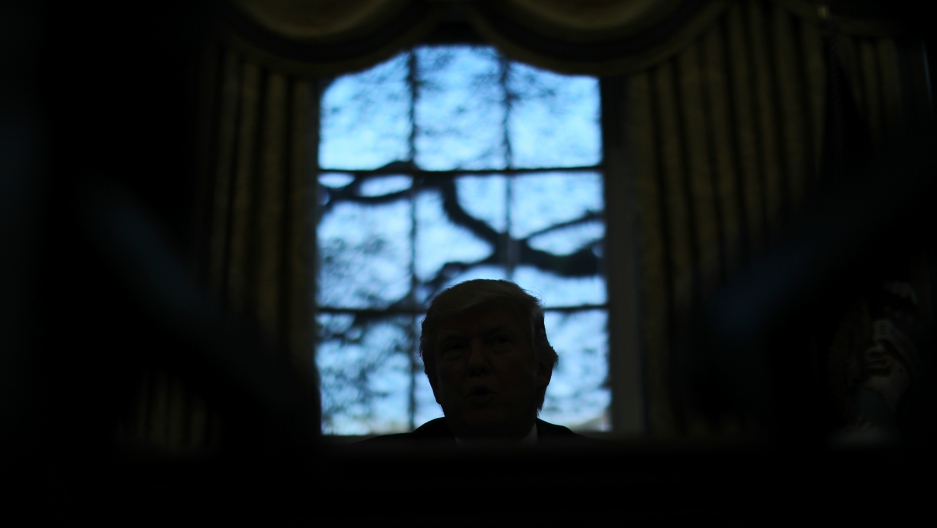 President Donald Trump sits in the Oval Office at the White House in Washington, DC, April 27, 2017.

#98. @realDonaldTrump, how have 100 days in office changed your thinking about national security? #100Days100Qs

As President Donald Trump prepared to mark the end of his first 100 days in office, he warned the United States could one day be at war with North Korea.

"There is a chance that we could end up having a major, major conflict with North Korea," Trump told Reuters on Thursday. "Absolutely."

As a candidate, Trump promised to "make America safe again." He's now spent 100 days serving as America's commander-in-chief, responsible for the safety and security of the United States and its people.

Trump said in that same Reuters interview that he's been surprised by how difficult a job the presidency of the United States has turned out to be. He seemed surprised to learn in February that health care is "so complicated." So it's easy to imagine he's also found it was simpler to promise to make America "safe" than it is to actually deliver on the promise.

There are plenty of things that might keep Americans up at night. Facing those threats as a candidate is very different from managing them as a president. So how has Trump's thinking developed since Inauguration Day when it comes to national security?

There might be a clue in the White House's press release, "President Trump's 100 Days of Security and Safety," which describes several steps Trump has taken in pursuit of what it calls his "top priority": "the security of the American people and the American homeland."

In terms of foreign policy, the statement describes how Trump proposed boosting military spending and "stood up to countries that have threatened our national security after years of failed diplomacy." That included ordering a strike on a Syrian air base; working to isolate Syria, Russia and North Korea; imposing sanctions on Syria and Iran; and reaching out to world leaders "to advance American interests and build relationships."

The White House statement also emphasizes Trump's commitment to enhancing border security, cracking down on unauthorized immigration and reducing violent crime in the US.

Surprisingly, there are three words that don't show up in the 100-days security roundup — words Trump took great pride in repeating again and again on the campaign trail and since taking office: "radical Islamic terrorism."

It's an odd omission, considering how often Trump has spoken in the past about defeating ISIS and the ideology that the terror group embodies. Stopping terrorism was how he justified early executive orders suspending refugee repatriation and banning travel from several Muslim-majority nations. (Those orders were blocked by federal courts.)

Prior to his election, Trump was relatively quiet about the Syrian government and North Korea. He said the US should look to ally with Russia and praised Russian President Vladimir Putin. Now, at a moment when Trump's administration is touting security actions and priorities over his first 100 days, it's highlighting his aggressive moves to isolate Russia, North Korea and Syria.

It's hard to say. Which is why we're asking you, Mr. President: How have 100 days in office changed your thinking about national security? Click here to tweet this question to the president.