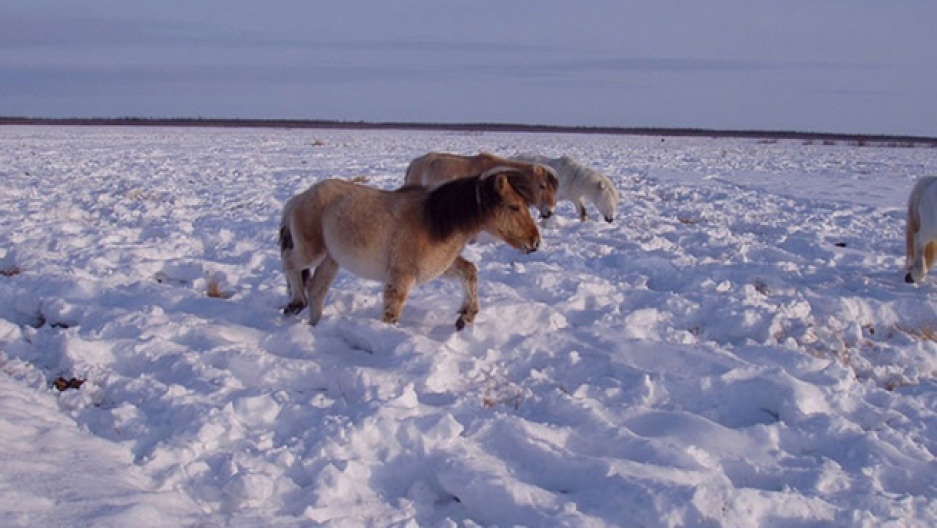 Yakutian horses are a semi-wild breed that have an extra-long, thick coat suited for Siberia’s frigid winter temperatures. When they and other grazing animals trample down the insulating snow, the freezing Siberian air reaches more deeply into the ground's permafrost.

Russian scientists Sergey Zimov and Nikita Zimov — they're a father-son duo — believe they can slow the thawing of the Siberian permafrost by bringing back grazing animals to a swath of land called Pleistocene Park.

Siberia’s melting permafrost has enormous implications for the Earth’s climate.

In some areas of Siberia, permafrost extends 5,000 feet below the surface. It contains vast amounts of carbon dioxide and methane. The top 3 feet alone is estimated to contain twice as much carbon as what’s already in the Earth’s atmosphere. As the carbon and methane are released over the coming decades, scientists say it could spell climate disaster.

Nikita Zimov believes he knows how to thwart that. “There is only one theoretical chance to prevent that from happening. We must restore the Ice Age ecosystem,” he says.

Pleistocene Park lies in a remote and desolate corner of Siberia a couple of hundred miles north of the Arctic Circle. Wintertime temperatures average around 17 degrees below zero. During the Ice Age, millions of animals roamed this territory. Back then, the Zimovs say, herds of bison, musk ox, reindeer, moose and woolly mammoths compacted the snow in the wintertime, which lowered the permafrost temperature.

Today, in the wintertime, the ground is covered by a meter-thick layer of fluffy snow, which acts much like a down comforter that insulates the ground from the cold air. So the Zimovs have begun the process of restoration by bringing in climate-adapted species, like stocky Yakutian horses, musk ox, wisent and European bison.

“When animals trample down the snow, they actually thin that layer of snow, making it dense, and this allows much deeper freezing during winter,” he explains.

Although the Zimovs’ research is still ongoing, early comparisons of soil temperatures below the compacted snow and ungrazed terrain indicate that trampling does cool the ground. Other research supports the basic idea.

Some scientists, such as Ted Schuur, a permafrost expert at Northern Arizona University, worry that putting grazing animals back on the landscape might have unanticipated effects, however.

“Animals would also be there in the summertime, and another possible effect of increasing your animals is that they might disturb the moss and soil organic layer that exists on top of the active layer,” Schuur says. “In the summertime, that has sort of the opposite effect: If you disturb the surface layer, it actually exposes the permafrost to warm summer temperatures.”

The Zimovs also hope that the part of the permafrost known as the "active layer," just underneath the moss, will create another climate-friendly outcome to their experiment. Grazing animals will stimulate the growth of grasses that take carbon dioxide from the atmosphere and return it to the soil. 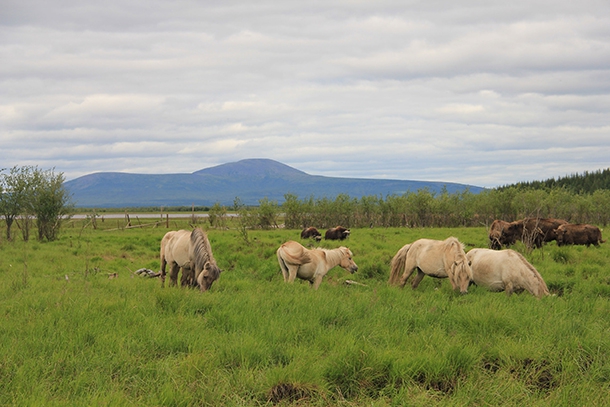 When a horse or a bison or a mammoth eats a blade of grass, it quickly digests it and returns it to the landscape in the form of urine or feces, which fertilizes the plants and stimulates additional growth. When they roamed the vast steppes, mammoths contributed a lot of fertilizer. Their elephant cousins produce over 100 pounds of manure a day. Efforts are underway to bring back the woolly mammoth through genetic engineering, but Sergey Zimov wants to proceed with or without it. Nikita Zimov feels the same.

“I don’t care whether it has five legs or six legs. I just care that it eats the grass, cycles nutrients, reproduces and can survive an Arctic winter,” Nikita Zimov told a filmmaker who is documenting the Pleistocene Park project.

Another thing that works? An old Soviet army tank. Nikita Zimov drives it around, and its caterpillar treads flatten the snow and snap young larch trees, simulating the heavy footsteps of the huge woolly mammoths that once ruled this land.

The idea is that over time, the conditions in Pleistocene Park will spread across Arctic Siberia and into North America, helping to slow the thawing of permafrost across a wide band of the Earth.

“We’ve been hearing talk about global warming for decades, but still the problem gets only worse,” Nikita Zimov says. “In the place where I live, change has become evident to everybody. We are rapidly approaching a tipping point when warming becomes unstoppable. It is too late to wait for someone else to deal with it. We must take actions now.”