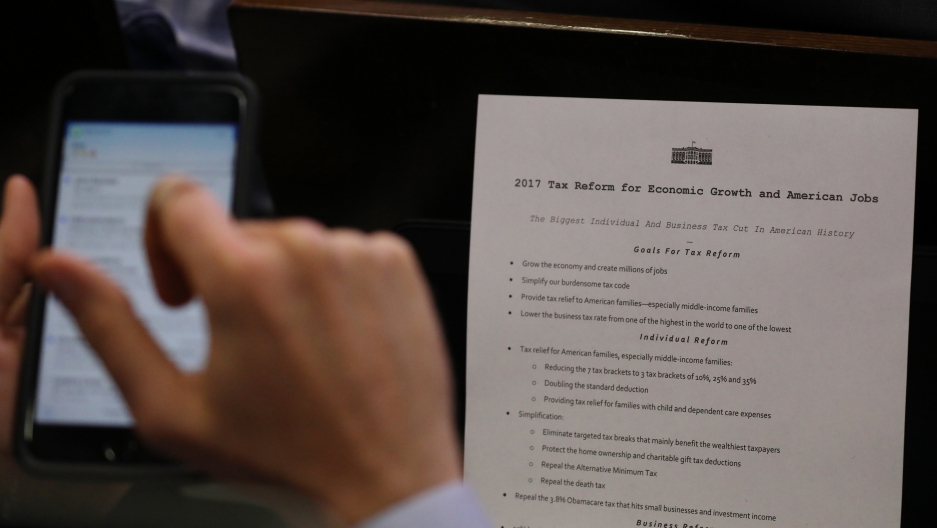 A reporter shoots a picture of a White House press release on its tax reform plan during the daily briefing at the White House in Washington, April 26, 2017.

#96. @realDonaldTrump, how will your tax plan spur economic growth? #100Days100Qs

The Trump Administration revealed its tax plan this week, and it calls for big cuts for individuals and businesses. President Trump's advisors offered few details about the plan, insisting the announcement was just a "broad-brush overview."

Here's what we do know: The plan calls for cutting the corporate tax rate from 35 percent to 15 percent, repealing the Obamacare tax on investment income, and doubling the standard tax deduction. The estate tax and the alternative minimum tax, which was responsible for most of President Donald Trump's taxes in 2005, would both be abolished.

Among the missing details? How much a middle class family could expect in tax cuts, and whether the plan would be revenue-neutral.

Independent analysts say that without significant offsetting measures, the corporate tax cut will almost certainly lead to an increase in the federal deficit, something Treasury Secretary Steven Mnuchin denied.

“This will pay for itself with growth and with reduction of different deductions and closing loopholes,” Mnuchin said.

But Douglas Holtz-Eakin, president of the American Action Forum and a former Congressional Budget Office Director between 2003-2005 under George W. Bush, says Mnuchin is wrong.

“It’s true that, if you have a good tax policy, you can help the economy grow more rapidly,” he says. “It’s not true that you will have it for free — that tax cuts will pay for themselves. You’re going to have to figure out some base-broadening to make it work.”

Holtz-Eakin says that while he is sympathetic to the Trump Administration’s objective, it is not supported by current economic conditions. The administration’s tax plan is supported by the hope that the economy will grow at a rate of 3 percent (up from about 1 percent currently) by the end of 2017.

“From the end of World War II to 2007, the economy grew fast enough that when, even with the arrival of the baby boom, income per person doubled roughly every 35 years, so in one working career the standard of living could double — I think that’s why people felt the American dream was within their reach,” he says. “At the current projections, the standard of living will double every 75 years, and I think people feel that. I think the focus on having the economy grow more rapidly is one hundred percent appropriate, it’s just not very easy.”

Without specifics, Holtz-Eakin says, the Trump Administration is simply putting forward a set of goals and objectives, not a true tax reform proposal.

“Tax reform is filling in the blanks and making it add up,” he says.

Getting the economy to expand at a faster rate would benefit the middle class, Holtz-Eakin says, adding that growth conditions have been fairly “anemic” since the Great Recession.

“We have not seen real wages — wages adjusted for inflation — rise in any kind of sustained fashion, and the middle class feels that painfully,” he says. “Many people had a job throughout [the recession]. The unemployment rate got to 10 percent. That means that 90 percent of people had a job, they just haven’t seen a raise for a decade, and that’s hard.”

According to Holtz-Eakin, President Trump and other Republicans were elected in 2016 with a single mandate: To make the economy work better. Now, it’s up to the White House to see that promise through.

“I think they will all be evaluated in the end on whether the economy is better than when they arrived, so the stakes are quite high,” he says.

With that in mind, we’re wondering: President Trump, how will your tax plan spur economic growth? If you’d like an answer to that question too, click here to tweet the president.