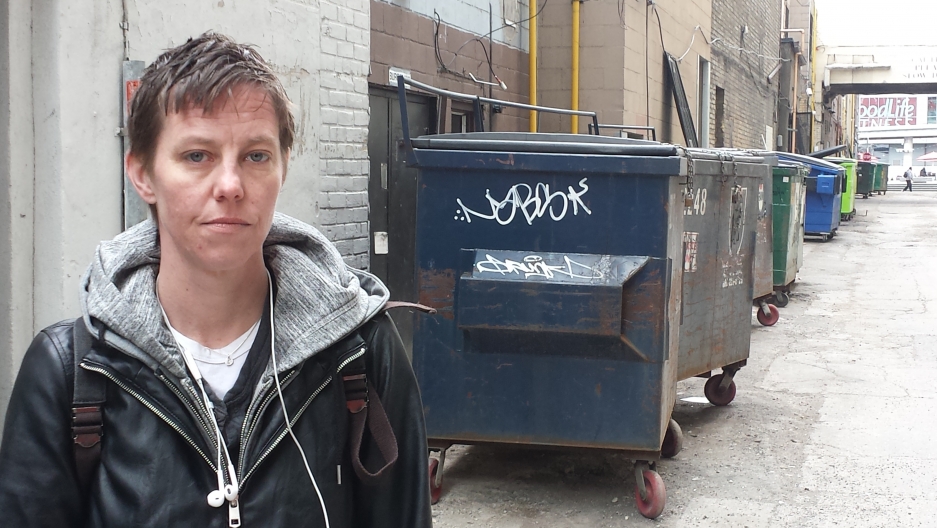 Amy Wright used to shoot up in alleys like this one in downtown Toronto. Now, she's helping the city design its safe injection sites.

Amy Wright doesn’t use drugs anymore but when she did, she’d sometimes come to a narrow back alley in Toronto’s downtown core to shoot up heroin and morphine.

The alley is lined with enormous dumpsters and littered with trash. In Wright’s words, “It’s dark, it’s gray, it’s dim, it’s dirty. In the summer, you’ll really start to smell it because of the garbage, and you’ll smell the urine and, as you can see, there’s crap on the door.”

For a homeless addict desperate for a hit, the alley offers a great place to hide. Wright says it’s rare for anyone to walk by, so an injection-drug user can take several hits without being interrupted.

But the seclusion also makes it dangerous. One of Wright’s closest friends died in the alley after injecting heroin.

“He overdosed, and nobody found him,” she says.

Wright says her friend struggled to get off heroin, and she believes he would still be alive if he had access to a supervised injection site.

The city of Toronto plans to set up three such sites later this year, as part of a new approach to dealing with Canada’s opioid crisis.

The number of overdose deaths involving heroin and prescription painkiller fentanyl has skyrocketed across Canada. In the province of British Columbia, figures from the coroner's office indicate that 922 people died from an opioid overdose in 2016, an 80 percent increase from the year before. In Ontario, there were at least 530 deaths from opioids in 2015, with fentanyl accounting for one in four of those deaths.

The Canadian government has promised to give several cities, including Toronto, Montreal and Ottawa, permission to set up clinics where people can go to inject illegal drugs without facing criminal charges. (Seattle and King County, Washington, are proposing to open what would be the first safe injection sites in the US.)

Lorraine Barnaby, the coordinator of a planned site at the Queen West Community Health Centre in Toronto, says drug users will first get screened by a nurse. If they’re approved, they’ll get a kit with clean needles and then go to a booth to inject while a nurse watches. If needed, the nurse can even help with the injection.

“We can apply the tourniquet to their arm. We can show them how to feel for a vein, we can help them locate actual viable veins. We can walk them through the preparation of their drugs. But what we can’t do is physically insert the needle into someone. We can’t push the plunger.”

Barnaby says that’s no different from teaching a diabetic how to safely inject insulin. The goal is to reduce the health risks, such as abscesses and the spread of HIV, which can come with injection drug use. Barnaby says the site will also prevent overdoses.

“If something goes wrong, it’s the best place for something wrong to go. Because we’ll be able to step in, save that person’s life, and that person will get to live another day,” she says.

Critics worry the sites will encourage more drug use and attract addicts to the neighborhood, but that hasn’t happened in Vancouver, which set up the first site in North America in 2003. Since then, drug use in public and discarded needles around the site have actually decreased, says Anna Marie D’Angelo, a spokesperson for Vancouver Coastal Health, which runs the supervised drug-injection facility, Insite. Research by the Centre for Excellence in HIV/AIDS at St. Paul’s Hospital in Vancouver shows that people who use the site are more likely to eventually go into rehab.

Amy Wright lived in Vancouver and says she used the supervised injection site there regularly. She says it saved her girlfriend from an overdose, and that it’s one of the reasons Wright finally quit using.

Wright has since earned a social work degree. She’s a harm-reduction worker at a women’s shelter, and now, she’s helping the city of Toronto design its safe injection sites.