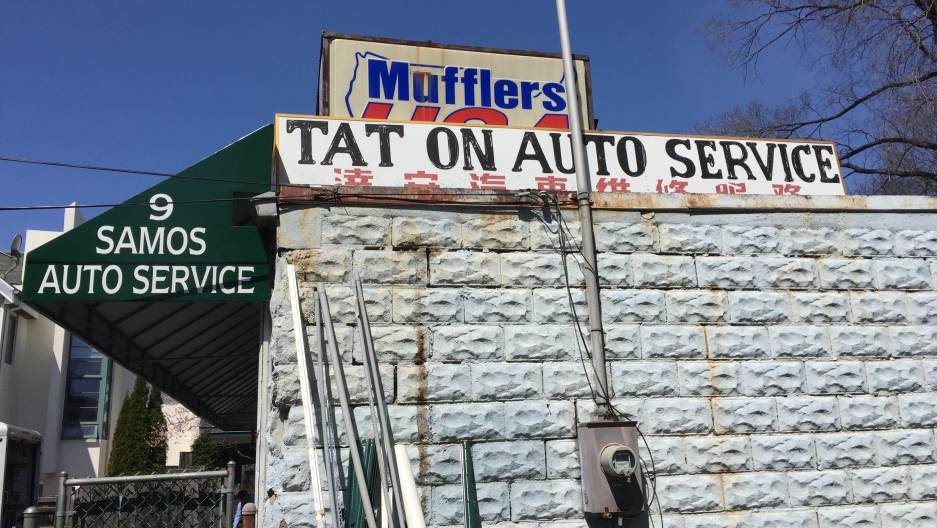 Guang Lin's shop in Cambridge is no more.

When you’ve got a great car mechanic and he leaves the neighborhood, it almost feels like your doctor has moved. Guang Lin is that mechanic. And with his departure goes much more than a mechanic and friend I trust, which is no small thing itself.

In my own neighborhood of Cambridge — Cambridgeport — just on the other side of the Charles River from our studios, change has been pretty striking.

It’s not been super obvious over the 15 years that I’ve lived there. Change is never obvious when it’s slow and so close to your eyes. But then something unexpected happens where the reality does become apparent.

Like when I came home two weeks ago to learn that Guang Lin, the mechanic who knows my car inside and out, has to leave the neighborhood. His landlord sold the property to a developer who’s going to build condominiums on the land. It shouldn’t surprise me. It happened to the lot right next to Guang’s Tat-On Motors. Those condos are almost reaching completion, just as Guang is moving out. When you stand across the street from the two lots, it even looks like Guang is getting squeezed out.

Guang Lin stands with cars in his Cambridge shop.

Guang has been my rock ever since I drove my 1997 Jeep with its manual transmission into his garage bay some 12 years ago. Each time it needed a repair, he wouldn’t just fix it. He’d call me first, explain the problem, and the price was always fair. Sometimes, Guang’s explanation wasn’t always clear. But it didn’t matter because I knew that when I’d collect my car, he’d have the offending part, and would walk me through why it had failed.

Guang’s garage is called Tat-On Motors. The first one he opened was not in Cambridge, but in Hong Kong. That was when he was 16 and was through with high school. Four years later he and his family moved to Boston.

I haven’t actually had to take my car into Guang’s for awhile. I sold the Jeep two years ago, and got a hybrid, basically a computer on four wheels that is tended to by the dealer. It’s kind of like my neighborhood itself, gone from analog to digital: from triple-decker family homes, other garages, convenience stores, braiding salons, and some MIT labs, to tech startups, sleek new condos, and neighbors like Google and Facebook.

Guang told me he always liked the old neighborhood. He liked his customers, and the friendliness of neighbors. I asked Guang how he felt about all the changes to the neighborhood. “No good,” he replied instantly. “There’s no room. Too much people. And too much street traffic. And I’ve lost my customers.”

There was always something special about dropping my car off at Guang’s, and this is the other thing I’ll miss about him. In the back of his garage, shimmied in between metal shelves laden with spare parts, was a koi pond. It’s one of Guang’s hobbies. He’s been buying and raising koi and goldfish for years, keeping them at his home and in his garage. Sometimes he buys glorious fish that run over $500 apiece. One of those flamboyant beauties was swimming around with a dozen other koi the last time I visited Guang. Its footlong body was pearl white, like an albino fish, with sparse patches of black and iridescent orange.

“Sometimes it’s very busy,” Guang said about working in the garage. “You have a lot of pressure, and you look at these fish, and you calm down, calm down. It’s nice for everyone. It’s good for relaxing. Young people, everyone comes to Guang’s to see my fish.”

Not any more. I know I’ll be thinking about Guang when I walk by those new condos sitting atop what used to be a great garage — and koi pond.

When I left Guang, he was trying to figure out when to move the fish. “By Monday, they cut off the power. So I need to move them maybe tomorrow.” He was ready — and not ready — to go.