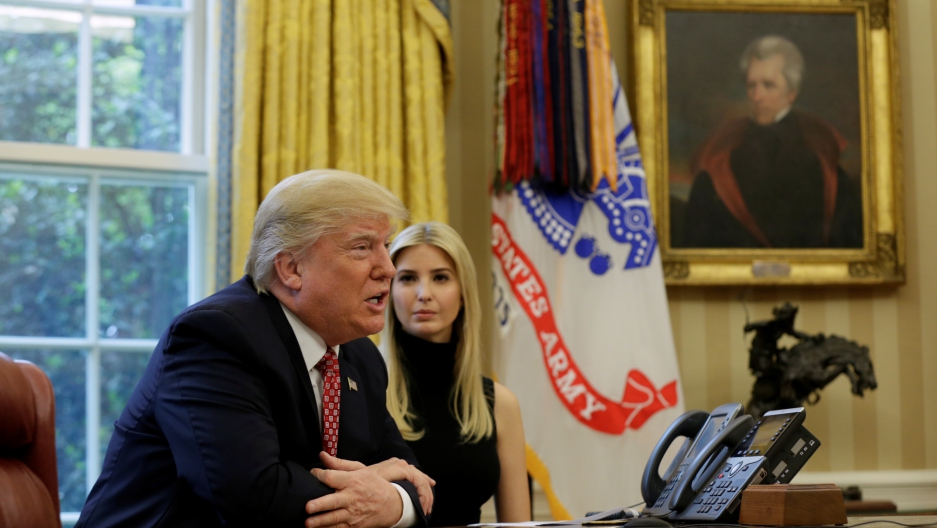 President Trump during a video conference with the astronauts aboard the International Space Station this week. He appeared dissatisifed with the current timetable for a manned mission to Mars.

American astronauts may be walking on Mars in the next eight years, or ideally the next four, if President Donald Trump has his way. But the new timetable has baffled experts in space travel.

The surprise announcement — or rather instruction — took place this week during a live video conference between President Trump and veteran astronaut Peggy Whitson, who is currently aboard the International Space Station.

During the conversation, Trump asked Whitson when it would be possible to send a human to Mars. She gave a careful and detailed answer explaining that a trip to the Red Planet might be possible sometime in the 2030s.

Not good enough for the White House. "Well, we want to try and do it during my first term or, at worst, during my second term, so we'll have to speed that up a little, OK?" Trump replied. There was awkward laughter from outer space. "We'll do our best!" Whitson promised, grinning.

According to Professor Tom Pike of Imperial College London (who worked on the 2008 Mars Phoenix Lander), the NASA timetable cannot easily be shortened. "I wasn't quite sure whether [Trump] was mis-speaking. Maybe he meant the moon, [not Mars]?" Pike says. "He's got to do it on a realistic timescale, and with the budget that gives it the funding that it would require."

One of the biggest constraints is the return journey, according to Pike. Compared to the Moon, Mars has much higher gravity, and a substantial atmosphere. So a rocket for the return will probably need to be sent to Mars well in advance. That plan is still at an early stage.

That is not the only matter to be overcome. "The issue is not just sending a man or woman to Mars," Pike says. "[Currently] even the space station is out of reach. The American astroanauts now there are there courtesy of the Russians, since the end of the shuttle program. So to go from essentially zero [to Mars] — this is a stretch."