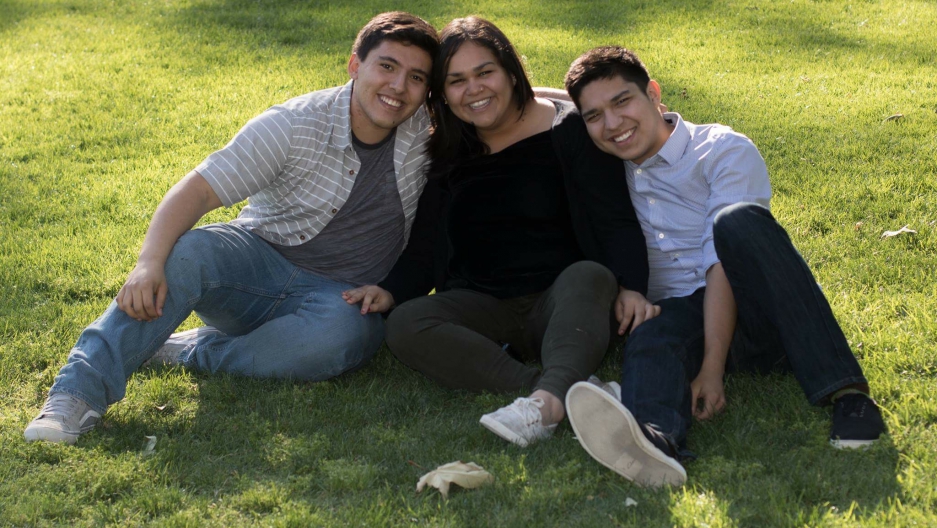 Maria Soria Castañeda grew up in North Carolina but was born in Mexico. She moved to the US with her family when she was 3. She’s also undocumented and, now, a junior at Swarthmore College, where she feels like a bit of a pioneer.

"We don’t really know what undocumented students they had before, but we were under the impression there weren't that many," says Castañeda. "Once we got here, we had to be the ones to sort of bring up what we would like to have here."

When she says “we,” she’s referring to herself and Miguel Gutiérrez, a fellow student also born in Mexico but who grew up in Arizona.

"He's from Arizona and I'm from North Carolina, which are pretty anti-immigrant states," says Castañeda. "So we've talked about how, growing up, we were used to people giving us backlash for our status."

On campus though, Castañeda still wonders whether some people think she doesn’t belong here. "Sort of listening to conversations to see where they're leaning towards and what I can talk about," she says.

Gutiérrez agrees, saying, "For me, when I’m trying to talk to a professor, and especially if I don't know them very well, I’m trying to kind of figure out do they know about my experiences."

For example, Gutiérrez wonders whether he will have to explain why he can’t apply for some internships or study abroad programs.

And that brings us to a project created by Gutiérrez, Castañeda and other undocumented Swarthmore students at the University of California, Berkeley. It seems simple: Participants receive a butterfly sticker, a symbol of migration, and post it to show support for undocumented students. A safe zone.

A butterfly sticker, part of a project to show support for undocumented students at Swarthmore College in Pennsylvania.

But Castañeda and Gutiérrez also want the stickers to create more understanding about the challenges undocumented students face. So, if professors want a sticker for their office, they have to sit down first with an administrator to go over basics, like financial aid barriers. Lara Langer Cohen is an English professor, and among the first who elected to participate in the program. "I have to admit and this is kind of embarrassing, but that was the first time I had thought about what undocumented students were doing on campus, what kinds of problems they were facing," she says.

She sat down for the primer and got the sticker — a butterfly and the message: "Migration is beautiful." It’s now on her office door.

"When you see it, the question you ask, is, what does it mean? So it's been good because it's really initiated conversations, particularly with other faculty," says Cohen.

The conversations, says Cohen, have revolved around the students’ efforts, but also about whether faculty members should talk about immigration differently in their classes. Several dozen faculty members applied for stickers, significant on a small campus. The butterfly project has also been picked up throughout California and by schools in Florida and Virginia.

Castañeda and Gutiérrez also got stickers for other students.

"I see them on people's laptops and on their doors, and it's really nice," says Castañeda. "It eased it a little bit where I could just walk in and be like, 'Oh, they have this on their door so they know that we're here.'"

Undocumented students here also formed a support group, so they know they’re not alone. It’s small, only about a dozen members. Sometimes, the idea is just to gather for dinner or a film.

"It’s been really tough to be among the first to kind of still be figuring out this process," says Gutiérrez. "So it became an urgent matter to me; it's like we need to provide a better space for incoming students."

The students in the group share the same uncertainties, about parents facing deportation or what happens after graduation. A number of undocumented students here also have DACA, or Deferred Action for Childhood Arrivals. It’s a program created by the Obama administration that lets unauthorized immigrants brought to the US as children work in the country legally. President Donald Trump hasn’t canceled DACA, but there’s no guarantee he won’t.

And since Trump’s election, Swarthmore has also declared itself a “sanctuary" campus, joining other universities across the United States. The school won’t voluntarily share information with or allow immigration agents on campus.

"I think people started to realize, like, this is a big issue, and these people are at risk," Gutiérrez says. He also says that this sentiment has driven demand for more butterfly stickers. The students have just put in an order for a second batch.