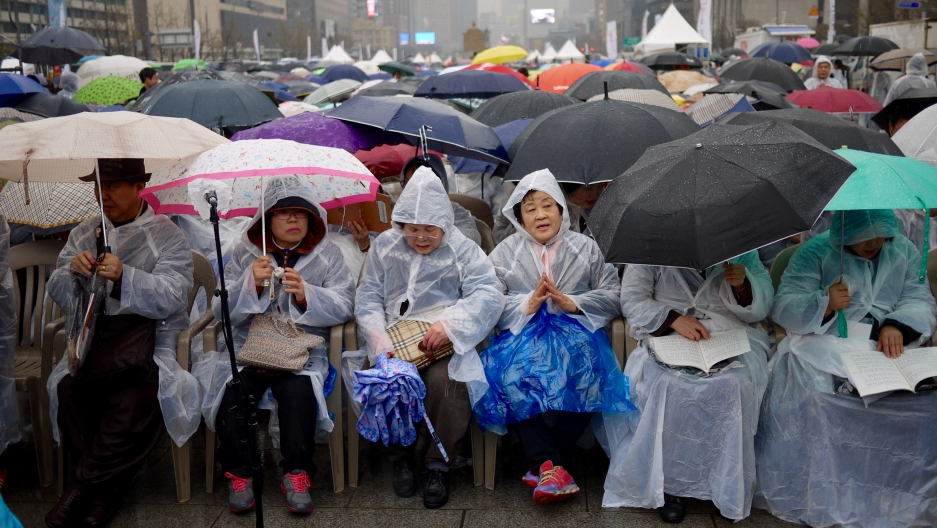 South Korean Buddhists gather every year to recite the Diamond Sutra with monks from the Jogye Temple in Seoul. This year was special, with a presidential election coming up on May 9th.

The weather was simply awful.

But the cold, wind and rain didn’t deter thousands of people from attending an annual ritual in downtown Seoul on a recent weekday afternoon.

People came to chant the words of the Diamond Sutra from Buddhist scripture with senior monks from the Jogye Order, the most prominent sect in Korean Buddhism, who presided over the event.

Also on hand were officials from most of South Korea’s major political parties. 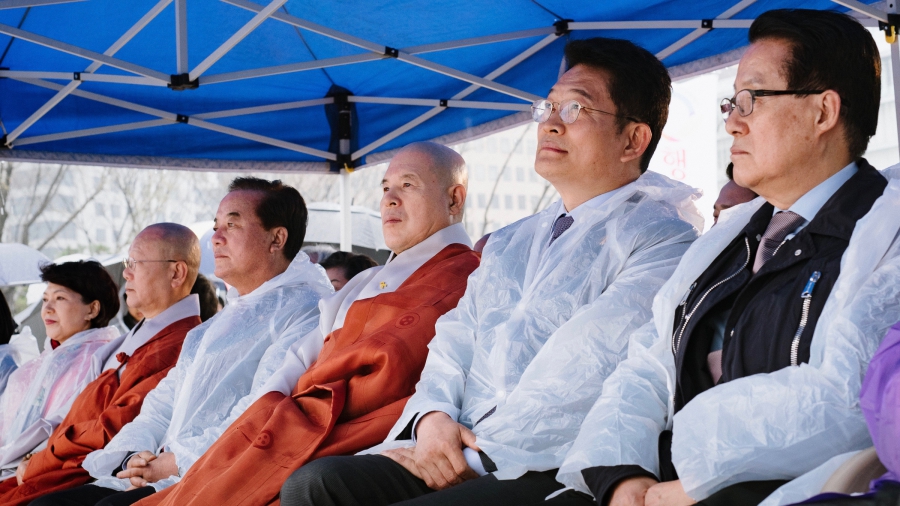 Top officials from most of the major political parties in South Korea attended a ritual in downtown Seoul on April 5th, 2017. They sat alongside The Most Venerable Ja Seung (third from right), head of the Jogye Order of Korean Buddhism.

“We can characterize Korean Buddhism as, ‘defense of the nation,’” says Seung-mook, senior monk at the Jogyesa Temple in Seoul, who like his fellow monks goes just by his given name. “When you have a peaceful and stable country, it’s good for the welfare of all people.”

Seung-mook says the Diamond Sutra is popular among lay Buddhists. And the theme of overcoming attachment to one’s self is an important part of it, he adds.

“Many people are living very selfishly,” Seung-mook says. “In Korean society today, we’re in a serious conflict. Between generations. Between rich and poor. It’s very bad. Right now, Buddhists need to pray for peace and harmony.” 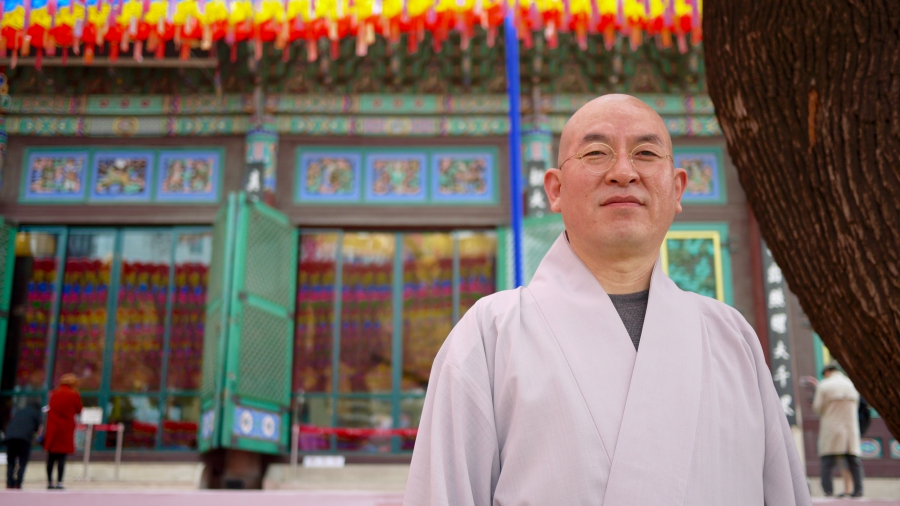 Seung-mook is the head of education programs at Jogyesa Temple in Seoul.

Another issue is praying for peace with nuclear North Korea, whose military dictatorship appears determined to develop the capability to hit the US mainland with a nuclear-tipped long-range missile.

When I ask Seung-mook about the escalating tension in the region over North Korea’s nuclear program, along with the tough talk directed at the North from President Donald Trump, the monk says he is quite worried.

“The US should cooperate with North and South Korea. If America does try to solve the problem with military action, it will mean a new Korean War,” Seung-mook says. “I hope the US will do the right thing and not just make careless comments. This isn’t what people here want.” 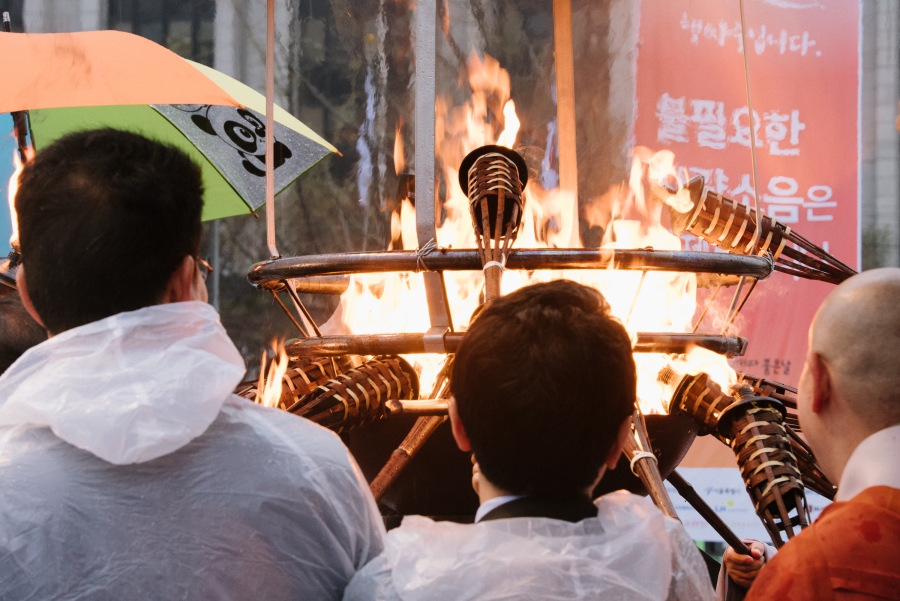 Buddhist monks and political officials lit torches at a public event for reciting the Diamond Sutra in downtown Seoul on April 5, 2017.

Monks from Jogyesa Temple have a history of political activism. Going back to the 1980s, Jogye monks have provided shelter to prominent political dissidents trying to avoid arrest.

More recently, the head of the Jogye Order publicly called on South Korea’s previous president, Park Geun-hye, to step down. Monks from Jogyesa also joined the big candlelight demonstrations that went on for months and helped push President Park out of office.

Seung-mook says next month’s presidential election in South Korea will be a critical moment for the country. Election day was on the minds of many people who gathered in downtown Seoul to recite from Buddhist scripture in the rain.

“We’re here to recite the words of the Buddha,” Shin Jong-oh tells me, as she huddles under an umbrella with a few friends. “These words will spread peace across the country.”

Another woman, Lee Chong-young, says the problem in Korea these days is that, “People don’t listen to each other.” 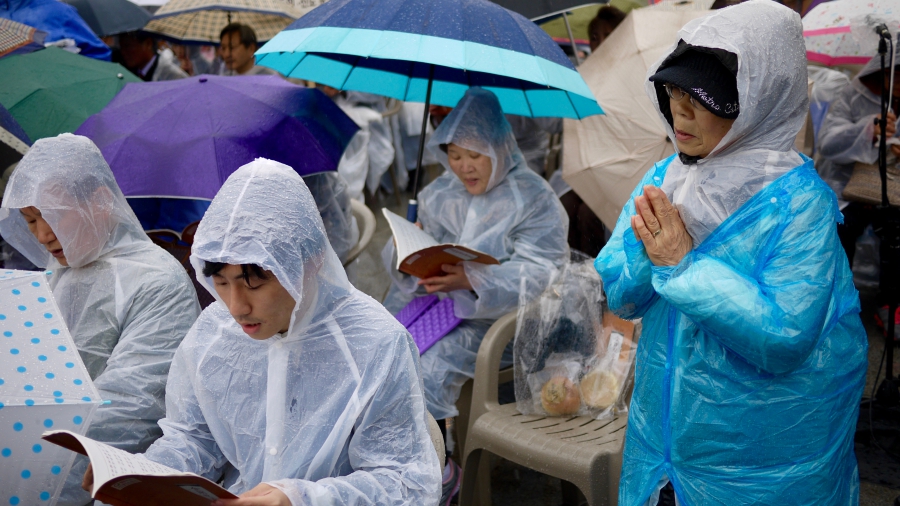 Lee tells me she has not decided who to vote for yet, but she will be listening as the politicians start to ramp up their campaigns.

The annual Diamond Sutra event could be seen as part of that political process, even though there were no long speeches from candidates or party officials.

It would be foolish for the politicians not to show up at an event like this, says Kim Min-woong. He is a Protestant theologian and a professor of world civilization at Kyung Hee University in Seoul.

Only about one in four South Koreans self-identifies as Buddhist. But Kim says that statistic is misleading. 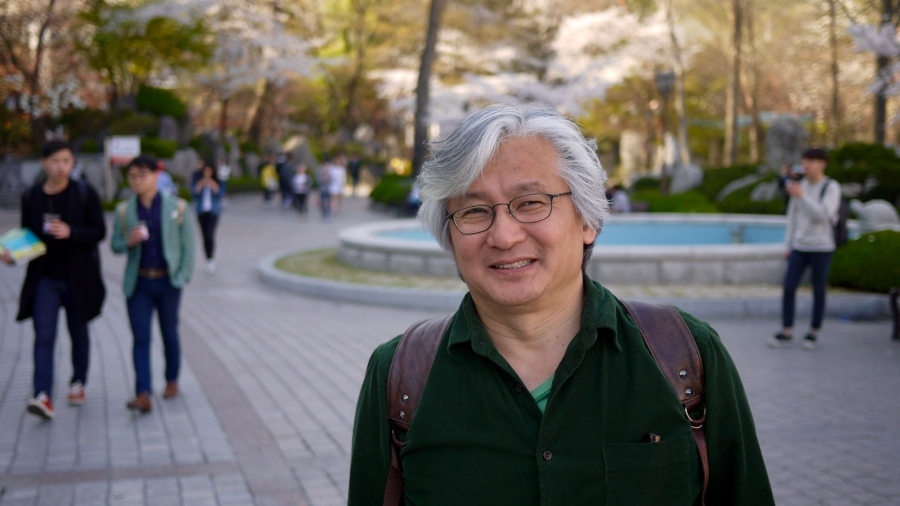 “[Buddhism] has become a part, a very natural part of Korean society for a long time,” Kim says.

“Buddhism works as kind of a cultural system of current society. Even if you are a Christian, you still belong to a Buddhist understanding of life,” he says.

At the same time, Buddhist monks in South Korea don’t exactly have a pristine public image.

A few years ago, there was a big scandal after monks were caught on video drinking, smoking and gambling. There were also allegations of sex.

But for many Koreans, especially older folks, Buddhism is a vital part of their national identity. 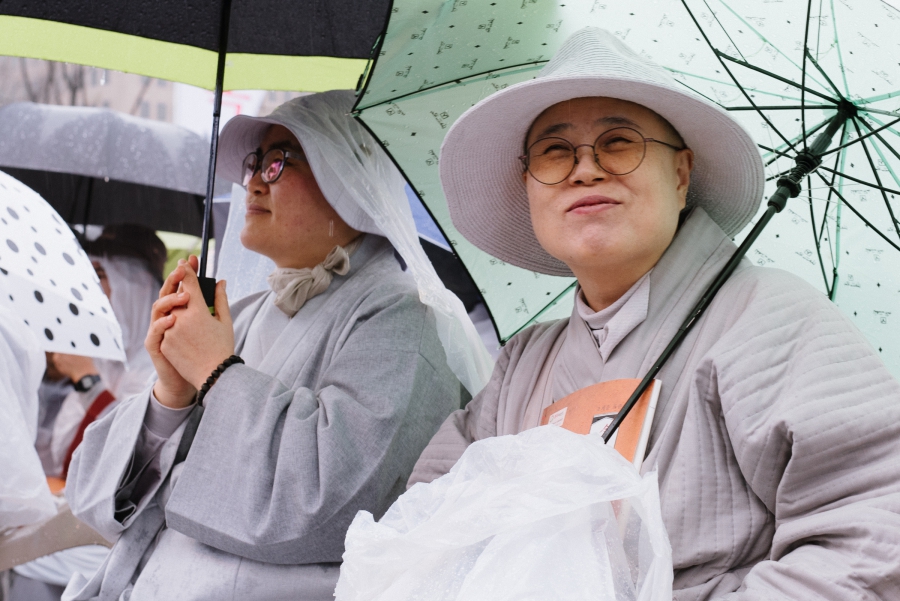 Buddhist nuns, along with monks and laypeople, tried to stay dry at this year's annual public reading of the Diamond Sutra in downtown Seoul.

People who know their history here will recall that Korean Buddhist fighting monks in the 16th century helped repel Japanese invaders. Books written by much-beloved Buddhist poets continue to be popular in South Korea, says Kim. “Christians read them [too],” he says.

Certain Buddhist monks have earned a reputation as dedicated progressive activists, says Kim, who describes his own politics as left-leaning. But he says those monks are in the minority.

He says an established, well-funded institution like the Jogyesa Temple and its leaders are broadly seen as enduring national symbols of Korean identity and by extension, of solidly conservative politics.