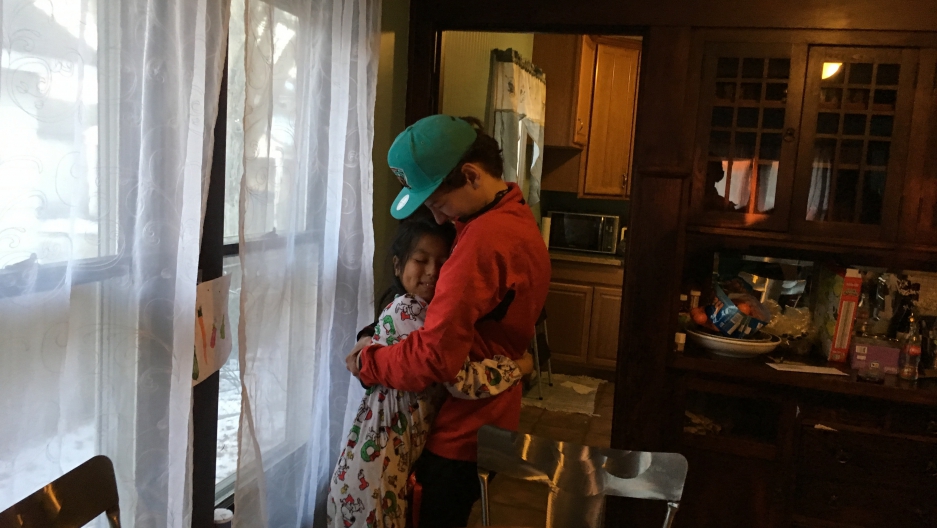 Armand Melk-Johnson gives me a tour of his host family’s home, a one-and-a-half story bungalow in Minneapolis.

He’s staying with his host mom Alicia and her two young kids, Mariel and Thomas.

Melk-Johnson is 15 and a ninth-grader at Minnehaha Academy, a private school in Minneapolis, that's doing something different. It’s running a program called City Stay, which offers students the chance to immerse in a new culture for one week. Currently, the program places students with Latino, Somali and Hmong host families.

Melk-Johnson chose to stay with this family, with roots in Peru. "My mom was really supportive of me," he said. "It’s just showing how other Americans live and it’s no big deal."

Alicia is undocumented and requested we not use her last name. She came to Minnesota from Peru 11 years ago, and both of her children, Mariel and Thomas, were born in the United States. She says she likes hosting students so her children can make friends with older kids.

Alicia only speaks a little English, and Melk-Johnson is still learning Spanish, but she said they can communicate well — even just in the way they look at each other. Mariel and Thomas started seeing Melk-Johnson as an older brother almost at once.

"I love having him here," Mariel said. "He has a lot of fun with my brother, and he's a very good older brother to me."

City Stay was founded several years ago by Julie Knopp, a kindergarten teacher at a bilingual school. Knopp got the idea for the program when she was living in El Paso, Texas, and was surprised by how wide cultural divides could be within communities.

"I was really excited about the potential of doing these cultural exchange at home, because not only could we learn from one another culturally, and still learn new languages, but we could do it in a way that broke down barriers in our community and helped us better understand the people we see in our everyday lives," Knopp said.

It's still an unpaid passion project for her and a handful of board members. So far, they've had about 60 students go through the program and have about 20 host families. Knopp also said some of the students' choices have surprised her. She’s had Mexican American students want to stay with other Latino families. And students from Thailand and China wanting to stay with a Hmong family.

"The student from China said, 'I lived in China, I saw Hmong people there. I came to Minnesota, I see Hmong people here. And I wanted to know, who are Hmong people? I want to know more about them,'" Knopp said.

Knopp says she was also motivated to start the program to make cross-cultural experiences accessible to more students. City Stay is much less expensive than a traditional study abroad program. It also attracts a higher percentage of students of color, including students who are themselves "new Minnesotans."

And, Knopp wants people to stay in touch.

"I love the idea of being able to have lasting relationships with our neighbors and continuing to learn from one another," Knopp said.

Before he left, Alicia made Melk-Johnson promise to call and come back to see them. He said he would.