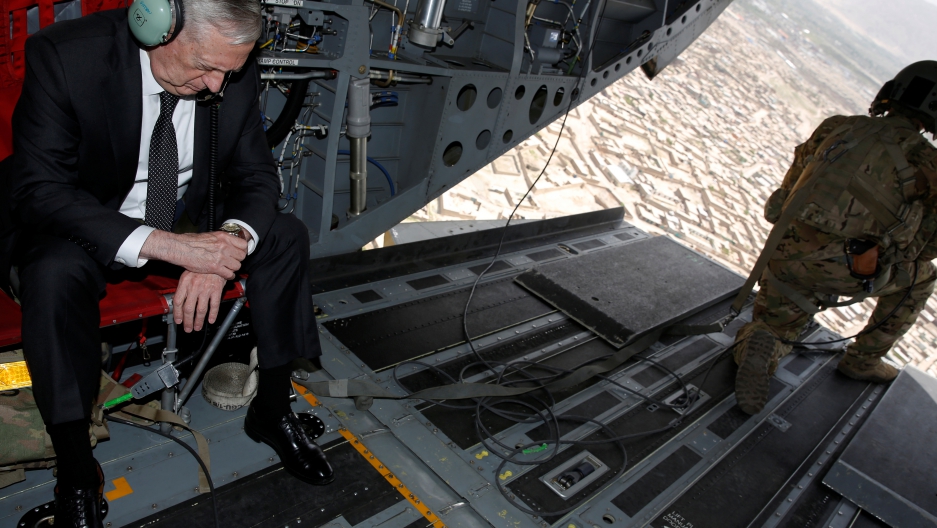 Defense Secretary James Mattis checks his watch as he arrives in Kabul, Afghanistan, on April 24, 2017.

The Trump administration is contemplating sending US reinforcements to try to stabilize Afghanistan. Defense Secretary James Mattis is visiting the capital, Kabul, to assess the situation.

However, Mattis can't meet with his Afghan counterpart, or the head of the Afghan military, as those guys quit Monday. Their resignations came after a military disaster last Friday, in which Afghanistan's army suffered its biggest loss of the war.

Insurgents overran a base near the northern city of Mazar-i-Sharif and killed at least 100 soldiers.

Pam Constable of The Washington Post has covered the war for years and sums up the conflict as “slowly deteriorating.”

Last year, 2016, was the bloodiest year of the war for Afghans, and 2017 is not shaping up to be any better. The Afghan security forces are suffering from serious attrition and consequent demoralization.

“It’s been up and down for a long time,” says Constable. “There have been periods in which it seemed like the Afghan defense forces were beginning to get their act together, and there are certain elements of those defense forces that are really outstanding in beating back the Taliban in certain parts of the country.”

“But the bigger picture of the defense forces is that they’re really struggling,” she adds, “and the Taliban just keep on pushing. They didn’t let up this past winter — there’s traditionally always less fighting in the winter in Afghanistan. But this winter it seemed to not stop at all. They just continued to power through.”

“At the same time,” explains Constable, “the Afghan forces are, for the first time, having to defend the country without international support, except for a few thousand Western advisers.”

In particular, the Afghan security forces are short of air support.

“So they’ve really had a hard time meeting the challenge,” says Constable, “while the Taliban, although far less numerous and with far fewer resources, seem really to have just as much conviction and determination as ever.”

At the same time, the government in Kabul is divided and fractious. It’s a coalition of competing ethnic, regional and political interests. “It was never a happy marriage,” says Constable. “It has never really worked.”

The Taliban has had leadership issues of its own over the last couple of years and is also facing competition from ISIS. So their performance on the battlefield has been even more surprising.

Constable says there has been a lot of debate over the size of any US reinforcement — whether it should be 5,000, 10,000 or 15,000 new troops. But Constable says anything less than a full-scale surge, comparable to that ordered by President Barack Obama in 2009-10, would have little effect on the ground, “but it still makes a big difference psychologically.” That’s because it sends a signal to the Taliban and others that the West remains committed to Afghanistan.

An end to the war remains elusive. Constable says everyone agrees that there has to be a political settlement, and there is no other way. “But that’s about the only thing people agree on, and the prospect of that happening anytime soon is quite dim.”