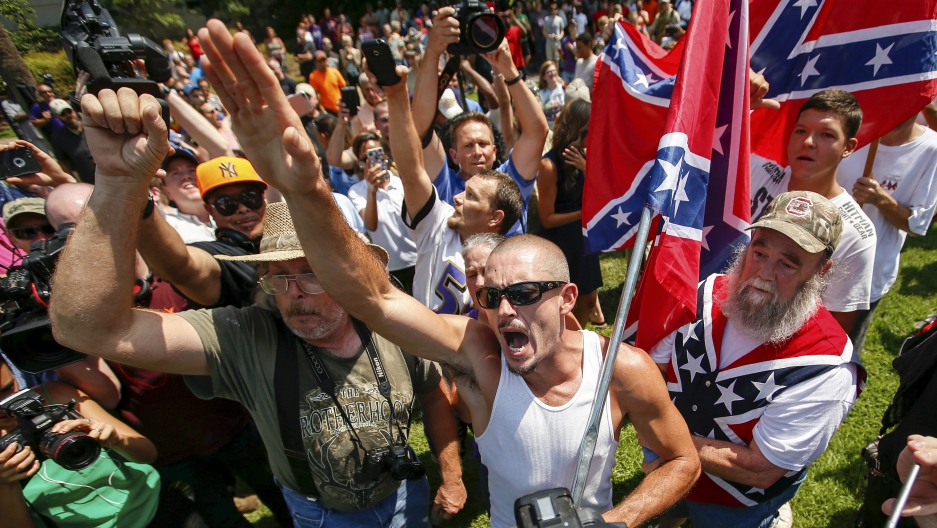 Demonstrators rally at the statehouse in Columbia, South Carolina, July 18, 2015, after state officials decided to remove the Confederate battle flag from the grounds.

#91. @realDonaldTrump, how do you plan to combat right-wing extremism in the United States? #100Days100Qs

President Donald Trump was quick to speak out after a gunman in Paris killed a police officer and wounded others Thursday night. ISIS claimed responsibility for the attack.

Another terrorist attack in Paris. The people of France will not take much more of this. Will have a big effect on presidential election!

The president was less outspoken about an attack closer to home last month.

On St. Patrick's Day, James Harris Jackson, a white 28-year-old US army veteran, took a bus from Washington, DC, to New York City with the intention of murdering black men. He'd hated black men since he was a child, he later told police, and he was especially angry about black men dating white women. Three days after arriving in the city, on March 20, he walked up to Timothy Caughman, 66, and stabbed him to death with a sword. He turned himself in to police on March 23.

It was front-page news in Trump's hometown papers, but he didn't tweet about the attack.

When Trump's press secretary, Sean Spicer, was asked about the killing on March 27, he said he didn't know all the details. Spicer then pivoted to defending the president's past silence about a wave of bomb threats against Jewish community centers. The media had blamed "people on the right," Spicer said, when many of the threats were actually called in by an American-Israeli dual citizen. "And it turns out, it wasn't someone on the right," Spicer said. "In that particular case, we saw that the president was right. And a lot of the folks on the left were wrong."

Given a chance to speak out against an admitted racist killing, the Trump administration chose instead to argue that the president had acted correctly in not condemning other threatened acts of right-wing violence.

It was a terrorist attack on American soil, and the president was silent.

The day before Jackson turned himself in, a lone attacker in London drove a car into pedestrians on Westminster Bridge and then stabbed a police officer. An American tourist was among six people killed, including the attacker. The next day — the same day Jackson surrendered himself for the terrorist murder of Caughman — Trump tweeted this:

A great American, Kurt Cochran, was killed in the London terror attack. My prayers and condolences are with his family and friends.

Cochran was killed by a terrorist. So was Caughman.

Trump's critics say this is a pattern. The president has been quick to condemn what he calls "radical Islamic terrorism." (His administration has even been accused of making up jihadi attacks.) But he's spoken much less often about the threat to Americans posed by homegrown right-wing extremists, white supremacists and radical anti-government groups.

Law enforcement agencies from the federal to the local levels consider these groups a significant terrorist threat — one that's grown in recent years thanks in part to racist and anti-government reactions to Barack Obama's presidency.

The president has some ideas about how to keep Americans safe from "radical Islamic terrorism." He promises to secure the borders. He's signed executive orders suspending the US refugee resettlement program and banning travel from several Muslim majority nations. And, presumably, his promised destruction of ISIS and the ideology that animates the group will have a trickle-down effect on homegrown jihadism in the US.

So that's his plan for "radical Islamic terrorism." Is it a good plan? Up for debate. But it's a plan.

But what about right-wing extremists? Trump doesn't seem to have a plan to keep Americans safe from those acts of terrorism. Or has he?

So, Mr. President, how do you plan to combat right-wing extremism in the United States? Click here to tweet the question.