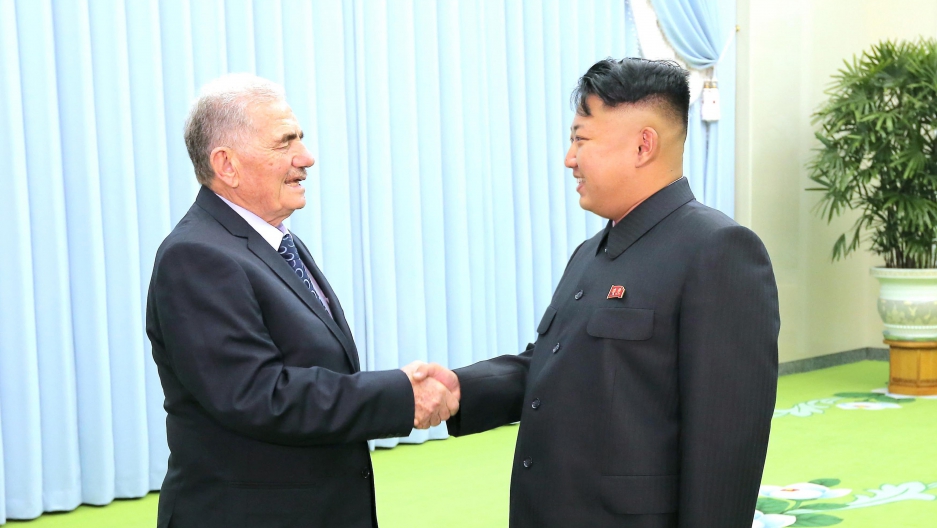 The horrors of civil war in Syria have proved a blessing for North Korea.

The regime of Kim Jong-un has made a killing selling arms and ammunition to the regime of fellow dictator, Bashar al-Assad.

A typical example is a machine gun known as the Type 73, according to Bruce Bechtol, a professor at Angelo State University in Texas. “[It’s] a machine gun made only in North Korea. It’s now been sighted — I have pictures of it — not only in Syria, but in Yemen by the Houthis, and the Iranian army is using it, as well as Hezbollah. But it first started being used in Iran and Syria.”

Bechtol’s research into North Korea’s illicit arms trade with Syria was published in 2015 in the Korean Journal of Defense Analysis.

Bechtol says the trade goes all the way from small arms like machine guns to rocket-propelled grenades, trucks and tanks. One staple of the trade is the 122mm multiple rocket launcher (MRL).

“I would be stunned. I would be surprised,” says Bechtol, if the nerve agent used by the Assad regime on April 4 in Khan Sheikhoun was not supplied by North Korea.

Bechtol says North Korea supplies nerve agents VX and sarin, along with pre-cursor chemicals, and that its technicians built the facilities that assemble Syria’s chemical weapons as well as the platforms for delivering them, especially rocket systems.

Help also comes in the form of personnel. North Korean technicians and specialists help with training on the ground. “We have reports of North Korean pilots flying helicopters for the Syrian air force,” says Bechtol.

The trade has been going on despite international prohibitions on the proliferation of weapons of mass destruction, and of arms sales to Syria. North Korea is also under sanctions.

Reporting by Quartz shows a number of North Korean weapons shipments have been intercepted at sea, for example by the Turkish navy. But many shipments get through.

Bechtol says some of the materiel gets sent by air, but most comes by sea. The cargo is sometimes disguised with ordinary looking commodities like cement, or even seaweed. “They’re very good at getting past international sanctions,” he adds.

Much of the trade is financed by Iran, one of Assad’s main backers. Iran is also North Korea’s biggest customer for its arms sales.

Collaboration and arms sales between the two dictatorships goes back decades, to the time of the fathers of the current rulers of Syria and North Korea.

The illicit arms trade is of huge importance to North Korea. “Illicit activity is worth more than 40 percent of the real North Korean economy,” says Bechtol. “And of that 40 percent, more than two-thirds of it is weapons proliferation.”

Larry Niksch of the Congressional Research Service estimates North Korea’s illicit arms sales in the Middle East alone to be about $3 billion per year. That doesn’t count big customers elsewhere, which include both Ethiopia and Eritrea, who have fought multiple border wars in recent years.

Bechtol has a book coming out next year called “Enabling Instability and Violence: North Korean Proliferation in the Middle East and Africa.”