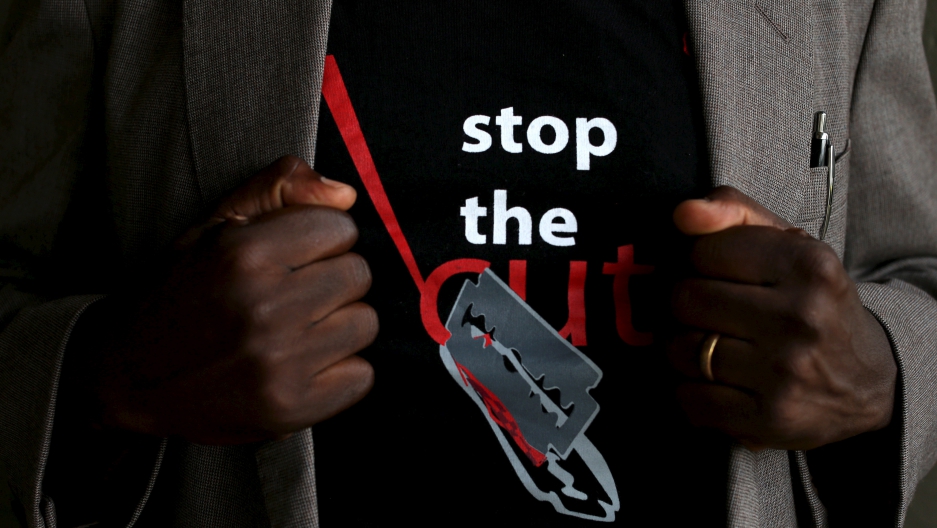 A man shows the logo of a T-shirt that reads "Stop the Cut" referring to Female Genital Mutilation (FGM) during a social event advocating against harmful practices such as FGM at the Imbirikani Girls High School in Imbirikani, Kenya, April 21, 2016.

As Adama tells me her story, the motivation for her fight, she pounds on her chest proudly.

She has an enormous smile and a stylish shock of short hair. Adama is 23, originally from The Gambia. When she was a little kid there, her mother told her: "You’re going to go visit your aunt, and when you come back, we’re going to take you to school."

"That’s how it happened," Adama recalls.

She was 7, and what happened was that her genitals were mutilated. Which is really common where Adama is from. In fact, when she went back to school, she found most of the girls in her school were also mutilated. 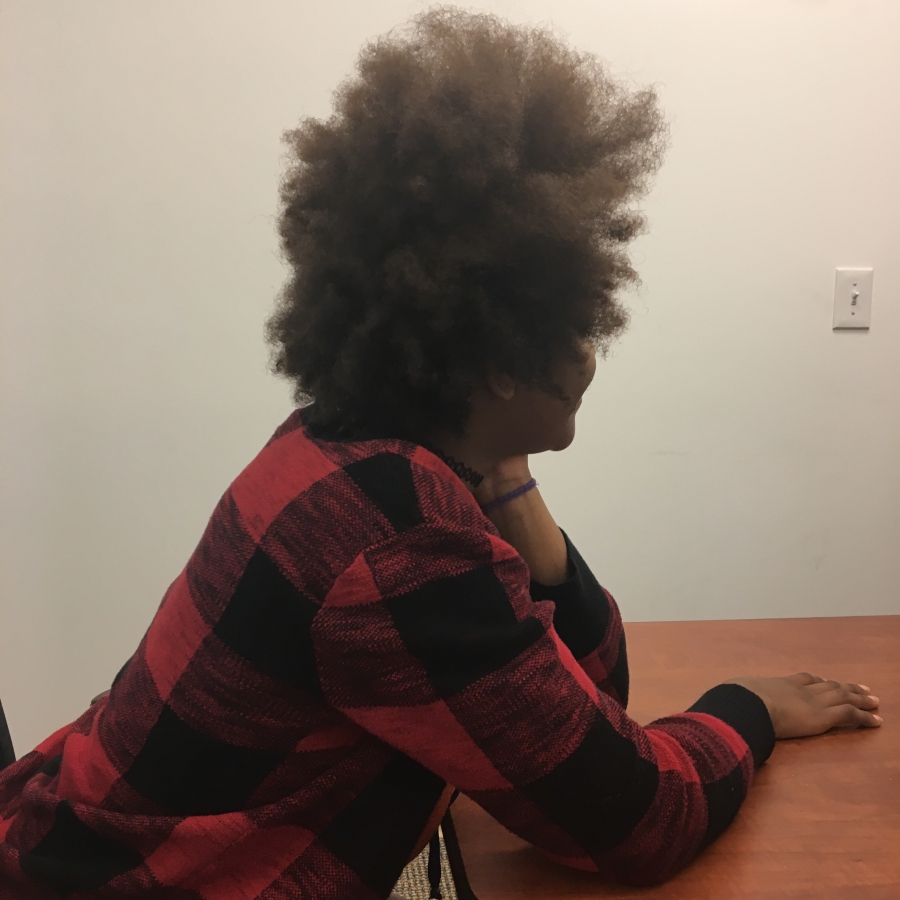 Adama is a survivor of female genital mutilation. She experienced it in her native Gambia, but now lives in New York City.

Adama says she asked her mother, "Why did you take me to this woman ... to get mutilated?" And her mother said to her: "Well you know, when you are mutilated, you’re able to control yourself, so that when you get married, your husband will find you a virgin."

"It’s ultimately about controlling female sexuality," says Dr. Deborah Ottenheimer, who works with FGM survivors. "There are a lot of medical side effects. Difficulty with menstrual periods afterwards, chronic vaginal infections. Also women tend to have difficulty with childbirth. They have a higher rate of complications with birth."

Ottenheimer started working with FGM victims in the Bronx, which at the time she got started was receiving an influx of Somali immigrants. But Ottenheimer says "this is not an African problem. Most of the cases we know of are from Africa. But there’s a huge number of women that we know about in Indonesia who have been cut, as well as Kurdish women, as well as the Bohra of India."

About 200 million girls alive today have undergone genital mutilation. Half a million of them are in the US.

New York has the highest number of cases among US cities. A lot of those women came to the US already mutilated, like Adama. In 1996 the US passed a law criminalizing the practice, and also making it illegal to send a girl abroad to undergo the procedure. But just last week, a doctor in Michigan became the first person in the country to be arrested on charges of performing mutilations.

Mariama Diallo, a social worker in New York, says she’s not surprised. She's heard anecdotes in the community, of local practitioners. Diallo works with Sanctuary For Families, a nonprofit fighting gender violence. She herself is from Guinea, where more than 95 percent of women have experienced genital mutilation. She hosts talks in New York City communities where it’s a common practice.

"The ultimate goal is to educate them, to prevent this from happening to their children," she says.

But, why would a woman who went through this agonizing ritual in her home country put her own daughters through it, once they live here, in the US? "Immigration creates a fear in families," Diallo explains. "They are so scared to lose their own identities."

Which raises all these questions — like, what if a culture’s age-old tradition is considered inhumane to the rest of the world?

I ask her how she thinks this practice could be eradicated. And she says men are the key. If men are on board, it can be solved.

"Men need to feel comfortable, to say, 'Yes, I am proud to marry a woman who is not mutilated,'" she says.

Until that happens, Diallo is helping the women who suffered mutilation move forward. She gathers survivors in support groups to talk about what they went through. "You know ... it’s amazing to see how much these women are resilient. They are so strong," she says.

This is something Adama has given a lot of thought, too. Especially the question of whether she is "whole."

Her dream is to study international relations and go back The Gambia, to help stop female genital mutilation. She’s got a youthful eagerness; she wants to eat the world up. If I had met her on the subway, I wouldn’t have known she struggles with anything particularly difficult.

Every morning, when she wakes up, she says she tells herself that there’s nothing wrong with her. "So I wake up in the morning and I have to write something great about myself."

I ask her what she told herself this morning.

"I’m the greatest!" she laughs.