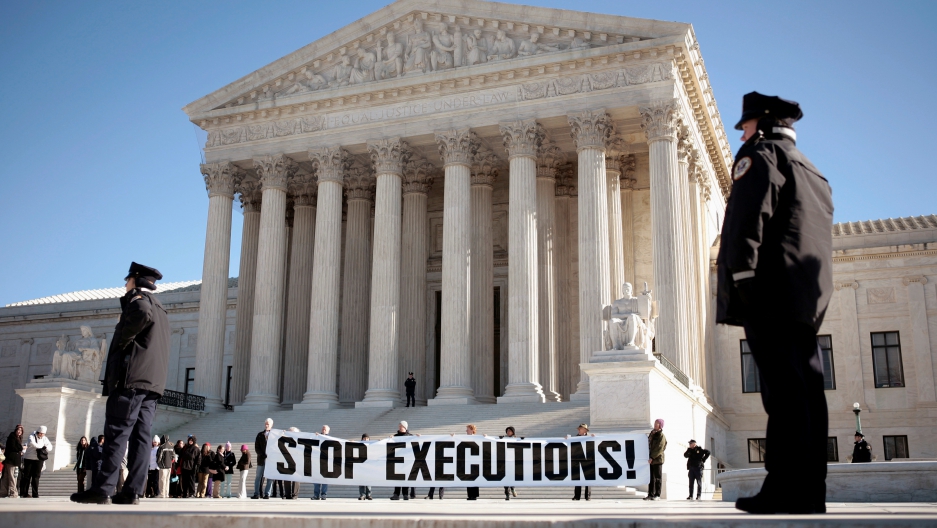 Protesters calling for an end to the death penalty unfurl a banner before police arrest them outside the U.S. Supreme Court in Washington January 17, 2007.

#88. @realDonaldTrump, how do you think states should ensure executions are humane? #100Days100Qs

The state of Arkansas had planned to execute seven inmates in eight days. The first two would’ve taken place on the April 17, though a federal judge has blocked those executions. The second two were slated for April 20 and two more on April 24, with a final execution on April 27. The three double executions would’ve occurred less than 90 minutes apart.

A series of rulings by state and federal judges have cast doubt on whether any of the executions will go forward.

No state has executed so many people in such a short amount of time since the death penalty was reinstated in 1976. Critics argue the speed in which the inmates were to be executed violates their Eighth Amendment protections against cruel and unusual punishment.

Arkansas Governor Asa Hutchison wants to move quickly because one of the drugs the state uses in executions, midazolam, expires at the end of April. It’s become very difficult for states to get the drugs for executions because multinational manufacturers oppose their use in that way.

At one hearing about the state's desire to move quickly on executions, former Tulsa World reporter Ziva Branstetter testified. Branstetter in 2014 witnessed the botched execution of Clayton Lockett. The drug midazolam was used in that execution, but did not render Lockett unconscious. Rather, it resulted in him writhing in pain for 43 minutes before his death. Since that execution, many states have stopped using the drug.

Experts say that without the prisoner being fully unconscious, they feel like they’re suffocating when the second drug is introduced. The third drug in the so-called three-drug cocktail states often use is called potassium chloride, which stops the heart. It’s been described as being like a hot poker being driven through the inmates veins.

Hutchison and other critics of the legal decision say these rulings prevent the families of the victims from receiving justice.

The Arkansas attorney general is trying to have those rulings overturned. According to Reuters, Attorney General Leslie Rutledge said "the families have waited far too long to see justice, and I will continue to make that a priority."

There are about 2900 inmates on death row in the US, including 63 on the federal death row and another five awaiting execution by the US military.

Executions are controversial. So long as they remain legal, however, the government is required by the Constitution to ensure they are neither cruel nor unusual. So, we're asking President Trump how he will ensure executions carried out by states, and possibly the federal government, while he's in office remain humane.