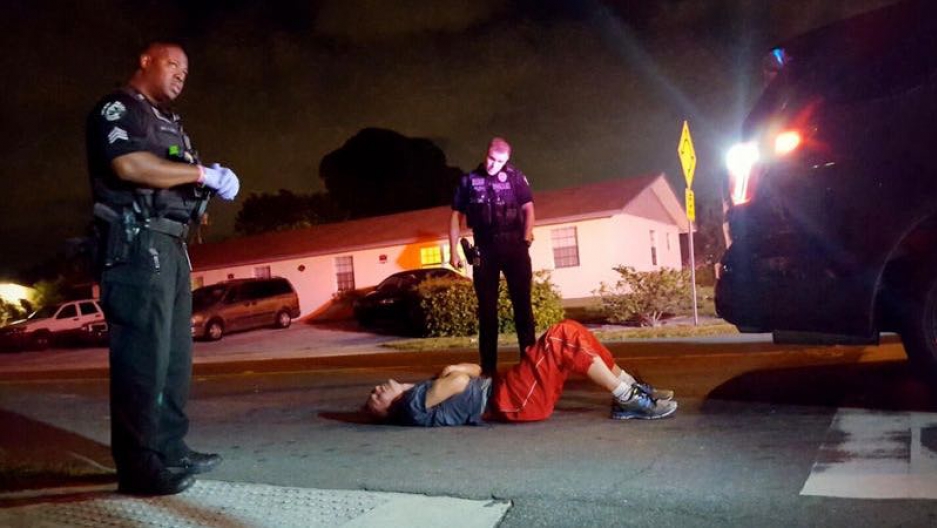 A man convulses in the street from a heroin overdose two blocks away from the Delray Beach Police Station on Nov. 18, 2016.

The man had just risen from the dead.

He’s in his mid-20s. Sitting on a couch, pale as a ghost, sweaty, wide-eyed, disoriented — like he had just woken up from a nightmare.

The man’s roommates found him unconscious and he was turning blue, not breathing. He was overdosing on heroin. They pulled out two auto-injectors of naloxone — an overdose reversal drug — and jabbed them into his thigh.

“How much did you use?” asks McCabe.

The residents of the house are prepared for episodes like this. It’s a sober home. The man is a recovering heroin user from Ohio. And like thousands of others, he came to South Florida to get well.

It’s 6:30 p.m. on a Friday. McCabe has been on duty for an hour and a half, and this is his second overdose call tonight.

“The overdoses, they’re like a dime a dozen,” McCabe says.

Firefighters take the man to a local hospital, and McCabe gets back in his cruiser. It’s a white, late model Ford Interceptor SUV with those all-black steel wheels police departments favor: strong, effective, no frills. It gets the job done without attracting attention.

The same might be said of McCabe. Athletic, alert, he’s 36 years old and about 6 feet tall. The sergeant, he’s a cop’s cop. He grew up in New Jersey in a family of cops, and he’s been working these same neighborhoods in Delray since he joined the force 15 years ago. But about five years back, McCabe says, Delray started to change.

“The overdoses are more routine nowadays than anything else,” McCabe says.

Delray Beach is at the epicenter of a South Florida overdose epidemic estimated to have claimed more than 900 lives last year. Medical examiners are still counting.

Three things came together to create this South Florida overdose crisis. Here’s the first: In the mid-to-late 2000s, South Florida had the dubious distinction of being the "pill mill capital" of the US. Rogue clinics were churning out prescription opioids like oxycodone, and drawing traffickers and addicts from states hundreds of miles away.

“It was basically just like a revolving door,” Sgt. McCabe says. “You’re watching zombies come in and out of the city — from all over. Guys coming down from Kentucky with fake prescriptions and fake X-rays, showing the doctor, getting prescribed like, 300 pills. Within an hour or so, they’d run out of them. It was that crazy.”

In 2011, state and federal agencies cracked down on the pill mills. But by then, lots of locals were hooked on the drugs. So, they turned to something cheaper, easier to find and totally unpredictable: street heroin.

“Sixty-two years I’ve been living here. But I ain’t never seen heroin this bad, man,” Wims says. “Only time I’ve seen it was in the '70s, but it wasn’t killing nobody. It’s just sad, man.”

Back on patrol, McCabe slows down as he passes a brick duplex.

“Had an overdose there last week,” he says. “The guy ... just moved in. He was there about four hours.”

This brings us to the second factor. That guy had just arrived in Delray from out of state.

The prescription opioid craze was by no means limited to South Florida. Throughout the 2000s, aggressive marketing by drug companies and the skyrocketing number of prescriptions written by doctors contributed to a nationwide opioid addiction.

And there was a place that beckoned to them.

“For decades, South Florida has been this absolute mecca for people in recovery,” said Andrew Burki, founder of the addiction treatment center Life of Purpose in Boca Raton. “People would come from all over the world to receive treatment services here.”

Starting in the 1970s, treatment centers in Palm Beach County began offering a sun-soaked solution to kick the addiction. People came, got clean and stayed.

“One, it's a very, very geographically nice location, the same reason why people retire down here. Hashtag ‘subtropical paradise,’” Burki says. “But there's also just a lot of talented clinicians and a huge community that built up down here.”

By 2015, addiction recovery was a billion-dollar-a-year industry in Palm Beach County, according to an analysis by the Palm Beach Post. And most of the people getting that treatment are not Floridians. An insurance industry report showed 75 percent of patients receiving care at private rehab centers in Florida came from out of state.

“You have ... hundreds of thousands of people that are in recovery that are supportive of new people coming in recovery,” Burki says. “Which is what made South Florida vulnerable to be preyed upon.”

Around seven years ago, corrupt operators figured out they could make millions by billing for expensive, unnecessary tests. And when a patient’s insurance benefits are tapped out, a relapse will start those benefits all over again. Which means there’s more money to be made when patients fall off the wagon than when they stay sober.

Besides that, drug dealers have also figured out how to benefit.

“You have what are so-called ‘sober homes’ next to houses that sell drugs,” says Sgt. McCabe. “Back in the day, you never really had that.”

No one knows the number of sober homes operating in South Florida. Delray Beach Mayor Cary Glickstein thinks there may be more than 800 in his city alone.

“On a busy day we've seen upwards of a dozen or more,” he says.

“I’m in my 32nd year. Our personnel at a very young age — young in tenure — are seeing more deaths than I've seen in my career,” said de Jesus. “It’s unlike anything we’ve ever seen. It's just not normal.”

What’s causing all those deaths, by and large, is the third factor.  Street heroin now is cut with super-potent synthetic opioids like fentanyl and carfentanil — thousands of times stronger than morphine.

And the overdose reversal drug — naloxone — isn’t working like it used to.

“They can do it through the bone marrow,” McCabe says.

“They get out a little drill — it looks like a Black and Decker drill,” McCabe says. “And they drill it into either your shin bone or your shoulder. A little thing sticks out of it when they’re done, and they just plug the Narcan through there.”

Paramedics can pump — through the bone marrow and straight into the bloodstream — up to 10 units of naloxone into someone’s body. But with these powerful synthetic opioids flooding the street, even that is no guarantee for revival.

“I have two overdoses in progress,” says the dispatcher. “One is seizing. They are both breathing with gurgling respirations.”

“Ten-four,” McCabe responds as he steps on the gas of the SUV, sirens wailing.

McCabe arrives at the two-story house and pulls diagonally into the yard. A young woman is motioning frantically on the front steps.

“Hello. Do you mind if we come in?” McCabe asks.

“Yeah, please,” the woman says. “Upstairs. There’s a needle on the floor.”

In a room upstairs, two young women are overdosing on heroin. Both are unconscious. One’s not breathing. She’s turning blue.

Around 10 minutes later, the first overdose victim — the one that was breathing — comes walking out of the house with firefighters. They strap her into a stretcher waiting outside the door.

McCabe tells me the other woman is being brought out on the stretcher. She wasn’t breathing, so firefighters carry out the drill.

“Remember that thing I was telling you about where they go through the bone marrow?” he says. “They did it to her.”

You can see it: a clear plastic tube sticking out of her shoulder.

Paramedics wheel her away and put her in an ambulance. McCabe gets back in his cruiser.

“One girl took seven doses [of naloxone], the other one took 10,” he said. “More and more doses every time.”

An estimated 4,000 people died from opioid overdoses in Florida in 2016.

Governors of five states have declared the opioid crisis a public health emergency. Florida lawmakers have called on Gov. Rick Scott to do the same.

This audio audio story originally aired on The Takeaway. The written piece was first published by WLRN.