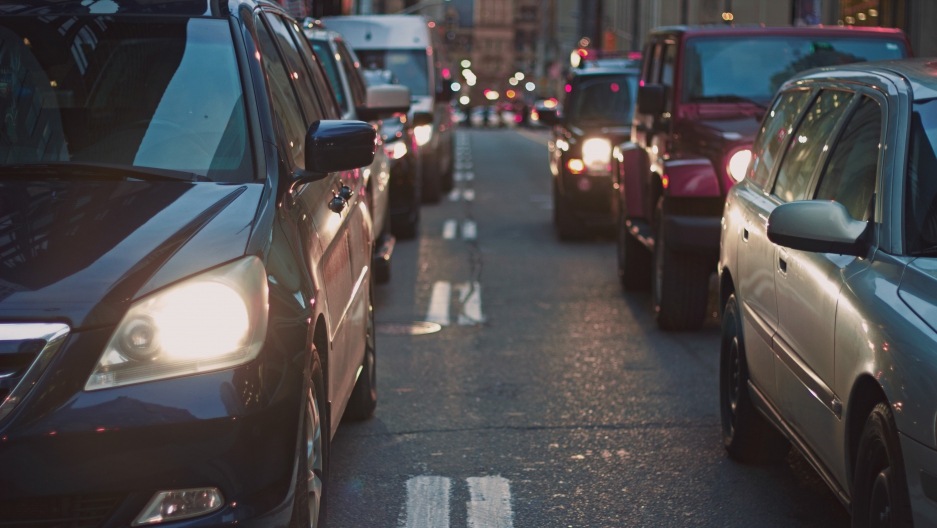 Health-wise, city noise can be bad for us, but our relationship with noise is often more complicated, says science journalist Susie Neilson.

In March, the Department of Transportation created a visual showing the levels of airplane and traffic noise that blankets much of the US. According to the map, 97 percent of Americans could be exposed to transportation noise measuring around 35 to 50 decibels — about the loudness of a humming refrigerator.

(How loud is it where you live?)

Health-wise, all that noise can be bad for us, but our relationship with the sounds around us is often more complicated, says science journalist Susie Neilson. It may even have some benefits. Neilson explored the link between city noise and our creativity in a recent article for Nautilus magazine, called “Noise is a Drug and New York is Full of Addicts.”

“It's true that for the most part, living around a lot of noise can be really detrimental,” Neilson says. “So for one, I mean obviously there's hearing loss, which can occur at regular exposure to really high levels of noise, so if you work around subways, around airplanes.”

Noise also stresses the body, she says, causing it to produce a stress hormone called cortisol — which can affect us negatively if we’re exposed to it for too long. “Some of the effects that people have documented, particularly with high noise levels, include … increased rates of heart attacks for people, you can also experience depression and respiratory illnesses,” she says.

“So it's really, overall, not a great thing to be living around a lot of noise.”

Neilson says when she first moved to New York, she was struck by how loud it was. “I lived in the East Village and construction would start at 6 a.m. and continue into the evening and at midnight there were all these garbage trucks, and I thought, ‘How am I going to live with all these noises all the time?’”

But soon, Neilson found herself considering the role that city sounds were coming to play in her life. When she visited the city’s only anechoic chamber — a tomblike room of just 20 decibels — she writes that the silence brought on a feeling of withdrawal.

“So, Joan Didion the writer, in her essay ‘Goodbye to All That,’ writes about all the different kinds of noise she's exposed to on a daily basis: the visual noise, the sensory noise, the smells and how it sort of contributes to her creativity,” Neilson says. “And so I started wondering, is there a relationship between the way that we think and the noise that we're exposed to?

She found a study published in the Journal of Consumer Research, proposing an almost Goldilockslike link between ambient noise and creativity — as in, a little bit of noise is just right. Specifically, researchers found that a noise level of about 70 decibels could actually enhance creative thinking. That’s about the loudness of a bustling café, they suggest. “Or traffic in midtown Manhattan,” Neilson writes.

“So, at a certain level of noise, people are actually more creative and they think more freely because the noise allows them a little bit of distance between the workings of their mind and the sort of external world,” Neilson explains.

For her, at least, the principle fits. “It's interesting, too, because people's levels are different. So I have ADD,” she says. “And so for me, a higher level of noise is actually good because my internal level of noise is a little lower because I have a little less dopamine flooding through my neurotransmitters.”