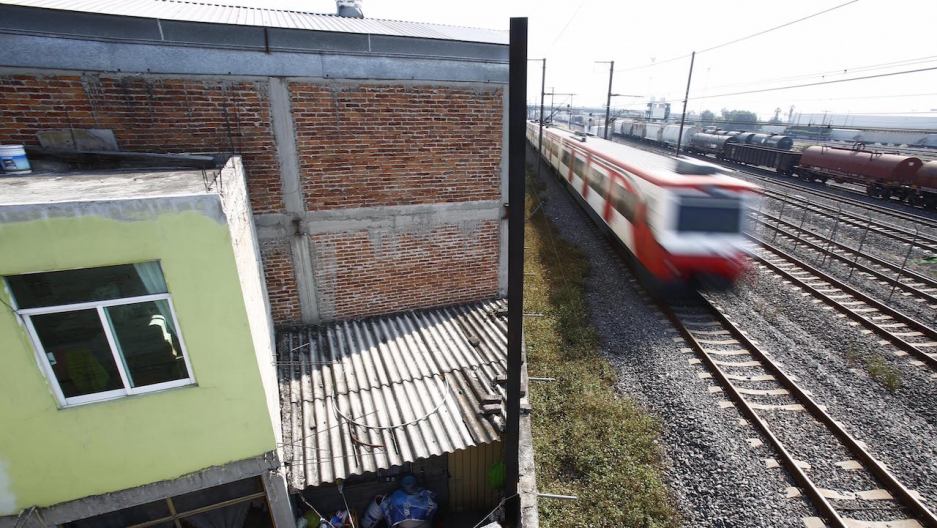 A suburban train passes by a house in Tlalnepantla de Baz, Mexico State, on Nov. 7, 2014.

Missing San Diego activist Hugo Castro has received medical attention and is stable after being found wounded Tuesday on a street called Avenida San Rafael in Tlalnepantla de Baz, a city in the State of Mexico, Mexico's attorney general said in a press release.

Investigators at the office of the special prosecutor for disappeared persons had received an anonymous phone call describing his location.

Details surrounding his disappearance are still unclear, but the office of Mexico's attorney general said it has since launched an investigation into Castro's "illegal deprivation of freedom."

Castro's partner, Gaba Cortes, had shared the news of him being found on her Facebook page Tuesday afternoon after meeting with investigators in Mexico City.

"We communicate to our friends, family, that Hugo was found alive. That's all we can share. Thank you to those who intervened," she wrote.

Enrique Morones, founder of the advocacy group Border Angels, said he was "delighted" to learn that his volunteer was found alive, although he was not yet informed of the circumstances.

"He is so loved by so many people, I'm sure that positive energy and all the help from so many people played a key role," Morones said. "There's been so many people helping us — the US government, the Mexican government, organizations, individuals, and we really want to thank everybody because it takes a team effort."

Castro went missing Thursday evening after posting a Facebook Live video from the shoulder of a highway near Mexico City, saying a group of criminals was "hunting" him.

"Seriously, I was threatened, they want to kill me," he said in Spanish, asking for someone to pick him up, describing his location as Kilometer 37 of the highway to Puebla out of the Mexican capital.

Castro is a volunteer coordinator at Border Angels, a San Diego-based advocacy group. KPBS aired a story on Monday that followed Castro as he delivered donations to migrant shelters in Tijuana.

His disappearance came while he was en route to Querétaro, Mexico to participate in a caravan that is following asylum seekers from Central America on their dangerous trek to the US-Mexico border.

The caravan is meant to raise awareness about allegations that the US has been turning away refugees without reviewing their cases, as well as human rights abuses they reportedly suffer in Mexico.

Castro said in his Facebook Live video, posted at 6:28 p.m. on Thursday, that a criminal organization had been following him for days and that they were now cornering him on the highway in freight vehicles. Castro had been traveling on buses and taxis.

He pointed the camera at an area of the highway where he said the drivers of freight vehicles were pulling over and watching him. The video is unclear but the tail lights of a vehicle are visible on the shoulder.

Castro, who appeared distressed, said he was almost out of money and that his phone's battery would soon die.

He added that the criminal organization that he believed was following him was from Tamaulipas and that he suspected the government and various transportation industries were involved.

Castro was one of the highest-profile American individuals to disappear in a country where officials estimate more than 10,000 people are missing. Mexico's attorney general was among those investigating his disappearance. According to some estimates, only about 1 percent of those who go missing are ever found.

“These people that threatened him were trying to take advantage of the Haitians and Hugo was defending them," Morones said.

In Mexico, drug cartels regularly profit off of migrants. They kidnap hundreds of them each month for human trafficking or ransom.

Castro, who regularly posted Facebook Live videos, posted one on March 10 from the Tijuana side of the San Ysidro Port of Entry, where he said he had just received a death threat. He recounted the incident in the dark, saying he had been advising a newly deported group of about 50 migrants on how to avoid being robbed, kidnapped and exploited.

A cab driver confronted Castro, saying he was going to kill him for interfering with his plans to pick up the deported migrants, Castro said. He added that the angry driver — from the Taxi Amarillo line in Tijuana — called his friends and that several of them surrounded Castro, backing off only when they saw security cameras at the port of entry.

"If anything happens to me, I hold responsible the Taxi Amarillo line of cabs here in Tijuana," he said.

A version of this story was originally published by KPBS.