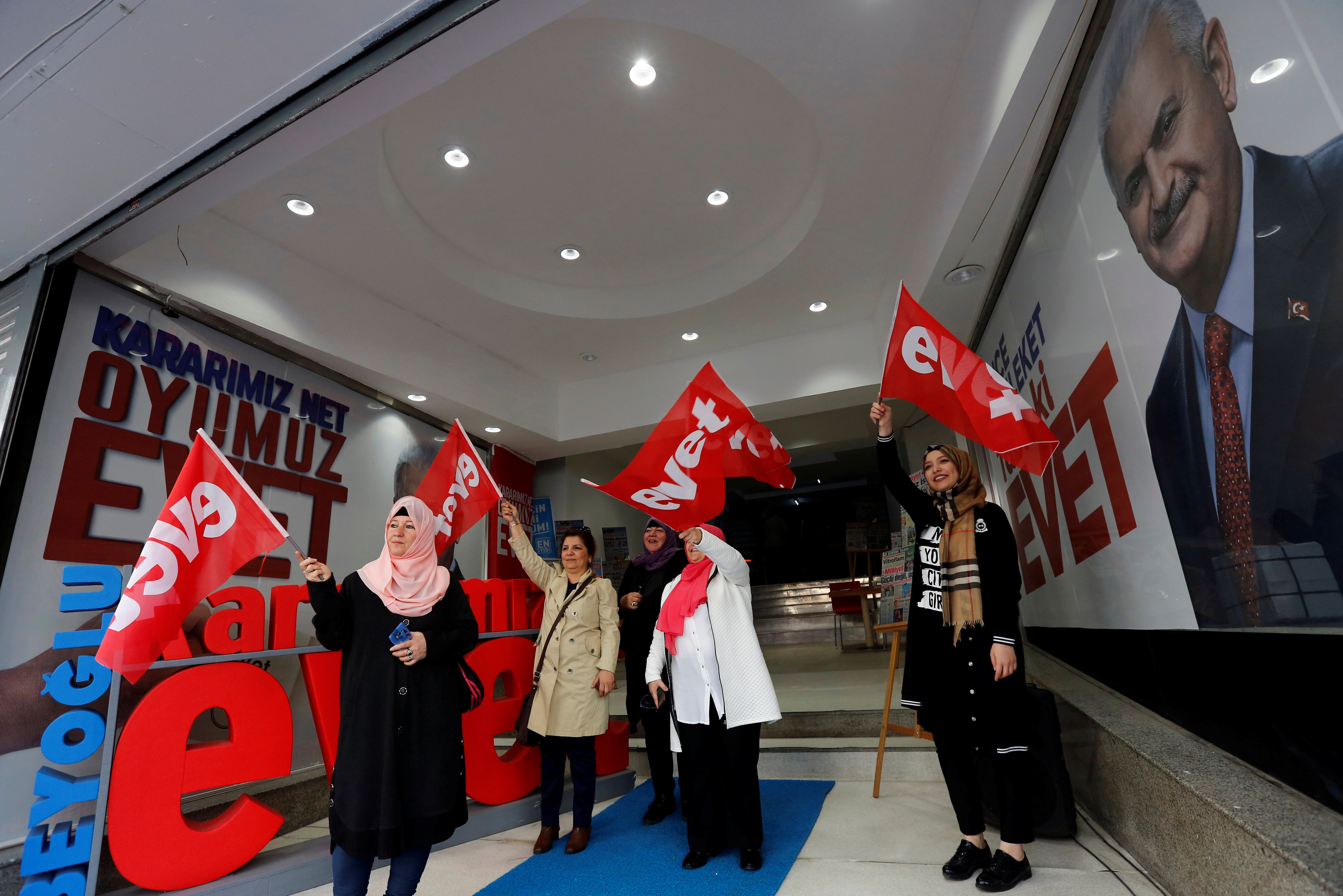 Women wave "yes" flags at a campaign office of the ruling AK Party for the upcoming referendum in central Istanbul, Turkey, on April 13, 2017.

For most of the last century, Turkey has been the go-to example of an Islamic country functioning as a secular democracy, where women enjoy vast freedoms rare across much of the Middle East.

This Sunday, this liberated vision of Turkey will be seriously tested. Turks will vote on a constitutional referendum to abolish the office of the prime minister and transfer its powers to long-standing President Recep Tayyip Erdogan, an Islamist and strongman, whose conservative and patriarchal views have pummeled women’s freedoms into dust.

For the last three years, we have been reporting from and living in Istanbul as journalists making the documentary "Dying to Divorce" about brave Turkish women struggling against a rising tide of domestic violence. The relentless wave of terrorist attacks shuttering restaurants and chilling public life have taken a toll — one of us left with her family for good this January, and the other makes only quick visits to report, fearful she will join the hundreds of journalists now imprisoned in Turkey on the flimsiest of charges.

Both of us watched women’s freedoms be threatened repeatedly. Until about 2012, Erdogan had been a champion of women’s rights — he rose to power in Turkey advancing women’s rights — and as prime minister, he pushed through laws on child custody, protection against violence and divorce that many women's groups applauded.

But even before term limits forced him from the prime minister’s office in 2014 into the ceremonious role of president, he began to play to his religious base with public pronouncements denigrating working women, abolishing the ministry of women and replacing it with the ministry of family and social policies, and declaring that men and women weren’t equal.

Last year, Erdogan’s party tried to amend the penal code to make it possible for a rapist to be exonerated if he married his victim; they are also trying to reduce the alimony payments a divorced man must make to his wife; and mandate a wife — even one who was a victim of domestic violence — go through a government “reconciliation process” before leaving her husband.

“A ‘yes’ vote could mean negative legislation like this will get passed so much easier,” says Sehnaz Kiymaz of Women for Women's Human Rights-New Ways. “It would mean the gains women have made would be taken away to ensure that women are seen as wives and mothers and within their traditional gender's roles.”

The president’s national campaign has fetishized Erdogan as a "strongman." That championing of the patriarchy seeps into family life — to its detriment. Violence and abuse of women have been on the rise. Men feel undue pressures to dominate, physically if necessary. This will only continue if Erdogan wins the referendum, many fear.

“I am frightened and I feel suffocated, sometimes I wake up in the middle of the night and think about what will happen if there is a ‘yes’ vote, the whole system will change and it’s terrifying,” says Ipek Bozkurt, a human rights attorney who advocates for women's rights.

“Women are saying ‘no’ because we all know that giving all the power to one man to make decisions on the behalf of all women can only be limiting. Alternative voices will be silenced, and he will get the final decision on all issues. We will lose representation of all voices, especially those of women.”

While the freedom of an unchecked authoritarian ruler to restrict women’s freedoms is terrifying, there is little to suggest a “no” vote will leave the situation any better.

We were in Turkey when President Erdogan lost his last grab at power — in elections in the summer of 2015 his party lost its parliamentary majority.

For a few weeks, many celebrated the vote as a reaffirmation of Turkish democracy. Instead, Erdogan reignited a civil war with the Kurds, destabilizing the eastern border and leading to the deaths of thousands. He then began arresting journalists, opposition leaders and representatives of NGOs, including women’s groups, under accusations of supporting terrorism. More journalists were jailed last year in Turkey than in any other country.

“Turkey’s president is a fighter and he will go to any lengths to get what he wants,” she wrote in the Times on Wednesday. “In the face of a defeat at the ballot box, he is likely to amp up his war against the Kurds, making him seem like an embattled defender of the nation.”

This will be terrible for all Turks. The impact on women is unique, and we saw this firsthand in covering the war in Iraq, Syria, and Afghanistan. Women and girls there feared even walking on the streets. The threat of physical, and sexual, violence — ranging from verbal harassment, to groping, to rape — was enough to drive women and girls into their home.

That meant abandoning school and professional pursuits as well as ceding the national conversation to one gender. Women lost their voice.

It’s something that women in these societies have long known — and Turkish women feel it, too. Pollsters have told us “women vote for stability.” Sadly in Turkey today, that could translate into a vote for authoritarianism just to keep themselves and their children safe.

“What the data show globally is that once conflict and polarization increases within a society, we know that violence against women also increases,” says Kiymaz.

“It is also true that once an economic crisis takes place in a society, services for women’s health and to protect them against domestic violence are first to go. So you have domestic violence increasing and the services decreasing. If you combine that with unjust rulings where perpetrators go unpunished, it creates a nightmare scenario for elimination of violence against women.”

For these reasons, she and others are voting against Erdogan. But whether Turkey’s women can hold on to their rights at all will clearly require a fight that extends well beyond this Sunday.

Christina Asquith is director of Across Women’s Lives, and Founder of The Fuller Project for International Reporting. Chloe Fairweather is a BAFTA-award nominated filmmaker and director of the forthcoming, "Dying to Divorce."