A young girl in Ganyiel’s health clinic watches her 3-year-old sister who is sick with cholera. Her mother brought her over from Tayar island to seek treatment in the clinic.

Kneeling over a pot of water drawn from the nearby swamp, Veronica feigns a smile as her eyes dart toward the floor of her small hut. “I know it’s dirty but I have no other choice,” says the 35-year-old South Sudanese mother of four.

A few years earlier, Veronica lost her 3-year-old daughter to cholera. Several months ago, another of her children contracted the disease and Veronica herself spent 10 days in a hospital receiving treatment. On South Sudan’s tiny island of Tayar, in Unity State, there’s no escaping this debilitating epidemic.

Once a commercial trading island with only 200 inhabitants, Tayar is now home to 2,300 internally displaced people who have sought refuge from South Sudan’s three-year civil war. They live with no toilets or running water, openly defecating in the island’s surrounding swamplands. This same filthy water is then used for cooking, bathing and drinking. Thus, cholera has become rife in this makeshift community.

The deadly waterborne disease, which causes crippling diarrhea and kills through dehydration, is flourishing amid the young nation’s war.

Every time fighting erupts in villages, people flee their homes seeking safety wherever they can, often in isolated pockets of safety where they have few resources and little access to aid. The war has displaced 1.9million people inside the country, while 1.6 million have fled its borders.

Many, like Veronica travel for days through swamps, with no food or water until they find sanctuary. Roughly 5,800 people reside on seven remote islands in Panyijiar county, including Tayar. 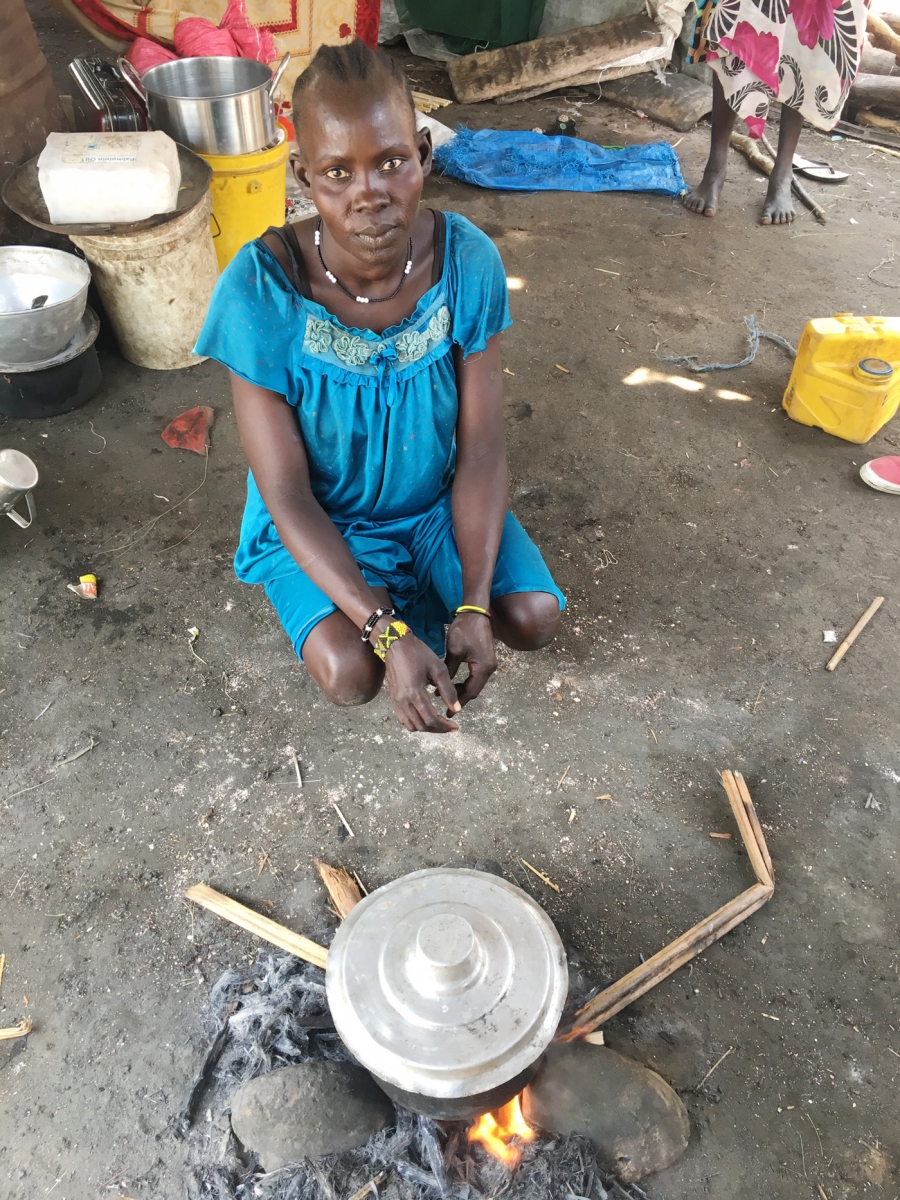 Veronica sits over a pot of boiling water, doing what she can to protect herself and her children from contracting cholera again.

These shifting populations mean that a growing number of people are crammed into small, unsanitary spaces, spawning a cholera outbreak that is unprecedented for this time of year.

“It would be the worst problem if this doesn’t get under control before the rainy season,” says Stephen Gatliah, health director for Panyijiar county. Gatliah has seen cholera in this area before, but he says it has never been this bad in the dry season, which usually runs from December to May. After that, the onset of months of heavy rains will make tackling the epidemic even more challenging, as flooding increases the risk of contamination and further restricts humanitarian access.

A UN study found that more than 4,000 cholera cases were reported between June 2016 and January 2017 in 10 counties in South Sudan, of which 83 were fatal, although the true figures are likely much higher due to unreported deaths. The disease has spread to more locations and lasted longer than the previous two years. On Tayar island 10 people have died from the disease since October and 37 have died in surrounding areas, according to community leaders.

A breeding ground for cholera

Since the latest bout of conflict broke out last July, 800 people have shown up on Tayar’s muddy shores, a two- to three-hour journey by canoe from the mainland.

The population has swelled so much that those who came before July now call themselves the “host community,” even though they themselves were displaced. They live in tents and sleep on dirt floors, eating water lilies or fish pulled from the nearby swamp. The conditions have created an ideal breeding ground for the cholera epidemic. 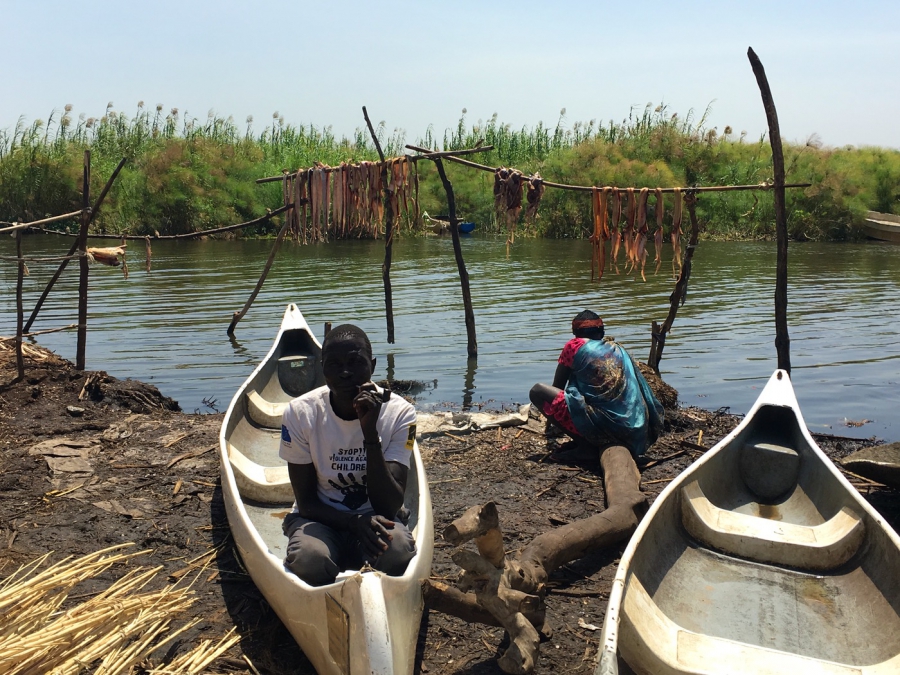 Tayar island’s residents fish for food from the surrounding swamp. Canoe is the only mode of transport off the island.

Most people sheltering on Tayar know little about the disease or the hygiene measures that could save their lives, says Oxfam’s Kiden Loice, who is working to eradicate the outbreak on the island and the surrounding region of Greater Ganyiel.

Oxfam was the first NGO to set foot on the island in 2017. Since the end of January, Loice has been doing what she can to get the situation under control. Not only was it difficult for her to reach Tayar, now she lacks the necessary supplies. Without water treatment pills, clean buckets and hygiene kits, she must make do by delivering information sessions to the communities about sanitation.

“It’s been weeks and we haven’t received our materials,” says Loice.

South Sudan’s war has made it extremely challenging for humanitarian groups to get staff and resources to places where people are in need. They must negotiate access with armed factions on the ground amid often-hazy chains of command. In recent weeks, there has been a series of deadly attacks on aid workers in the country.

They must also contend with South Sudan’s shoddy infrastructure. Many parts of the country are inaccessible by road, requiring planes or helicopters to reach them.

The cholera outbreak is spreading from the islands onto the mainland and into Ganyiel, the closest town to Tayar island.

A tiny, dusty oasis, Ganyiel has for the most part managed to stay out of South Sudan’s civil war. It has become a haven in the region for thousands of people escaping the fighting.

In the past seven months, the town has begun to buckle under the influx. Since July, 23,000 people have joined the existing 99,000 inhabitants, according to local officials. Community leaders worry that pressure on the town’s meager infrastructure will perpetuate the cholera outbreak. 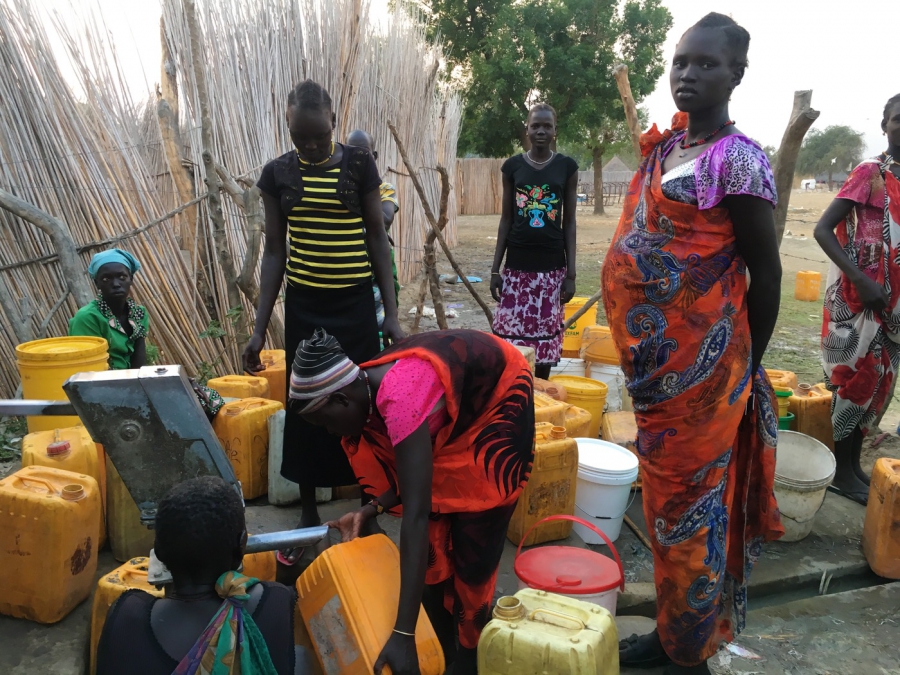 Women in Ganyiel stand in line waiting to pump water.

In the central part of the town, 15,000 residents rely on four boreholes, or wells, to access clean water. There is often not enough water to go around and jerry cans sit empty by the pumps. Women can spend three to four hours waiting in line to draw water. Many get fed up and instead fill their buckets from the cholera-infected swamps in order to cook for their families.

"Too many people are dying,” said a local administrator for Greater Ganyiel who gave his name as John.

Oxfam is planning two more boreholes in Ganyiel as well as a pit latrine toilet on Tayar island so people don’t have to defecate in the water. Their hope is that once their supplies come through they’ll be able to provide sanitation and clean water to 3,000 households before the rains set in.

All of this, however, depends on how quickly their materials arrive and if they’re able to keep up with the constant flow of displaced people .

In the meantime, Veronica and her children have started boiling the swamp water on Tayar island, doing what little they can in order to keep the disease at bay.

For the remaining few months of the dry season, eradicating the outbreak will be a race against time.

This article originally appeared on Refugees Deeply, and you can find the original here. For important news about the global migration crisis, you can sign up to the Refugees Deeply email list.