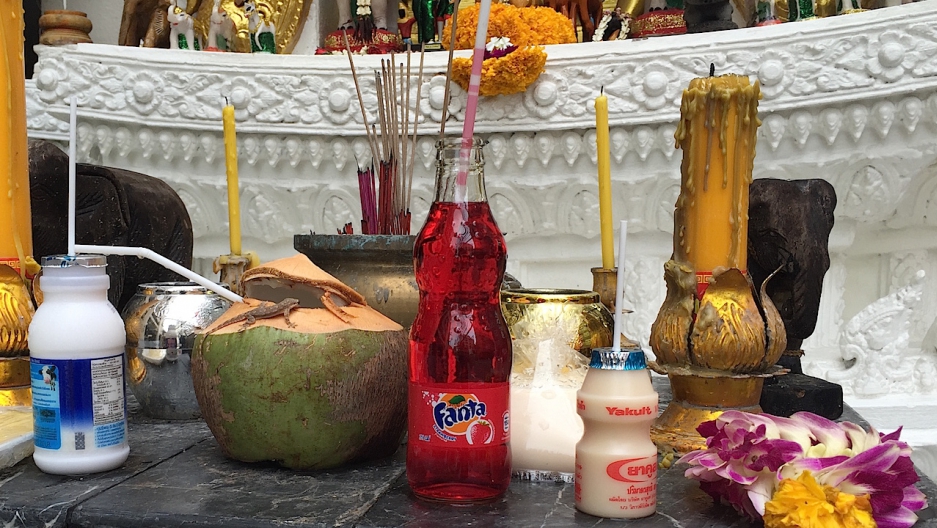 Strawberry Fanta has a central place in Thai spirit houses.

There are no official guidelines for maintaining a serene Thai home. But if there were, they might include the following rules.

No wearing shoes indoors. Never, ever talk back to your mom. And don’t forget to feed the ghosts.

In Thailand, it’s common to believe in paranormal spirits. This alone is not particularly extraordinary. The same is true of people in Iceland, Taiwan, the United States and many cultures around the world.

But Thailand is unique in its melding of spirituality and cuisine. To appease the spirits in Thailand, skip the somber incantations or spells. These ghosts prefer snacks.

There is a generally agreed-upon menu of ghost-friendly food and drink offerings. Rice and plain water will do in a pinch (or if you’re broke). But Thai spirits would much rather receive bananas or coconuts. Better still, some starchy, eggy desserts.

The best offering of all, however, is red, fizzy soda. Preferably a bottle of strawberry-flavored Fanta.

It’s hard to think of another case in which corporate junk food and the occult are so deeply intertwined. Walk the streets of Bangkok for a day and you’ll notice dozens of opened, unconsumed Fanta bottles in conspicuous locations.

Each Fanta is situated before what looks like an enchanted dollhouse, all glittery and golden, perched on a chest-high pedestal.

This is a “spirit house.” Every home in Thailand, shack and mansion alike, is accompanied by a little spirit house.

It’s like a parlor where friendly ghosts congregate and receive free fruits and sodas. (Humans will leave these blessed treats alone — stealing from a ghost is begging for bad luck — but tropical ants are less deferential.)

Set out some Fanta and benign ghosts will gather 'round to defend your abode from demonic forces. Neglect them and they’ll flit away. That gives sinister spirits a chance to claim squatter’s rights and start raising hell. 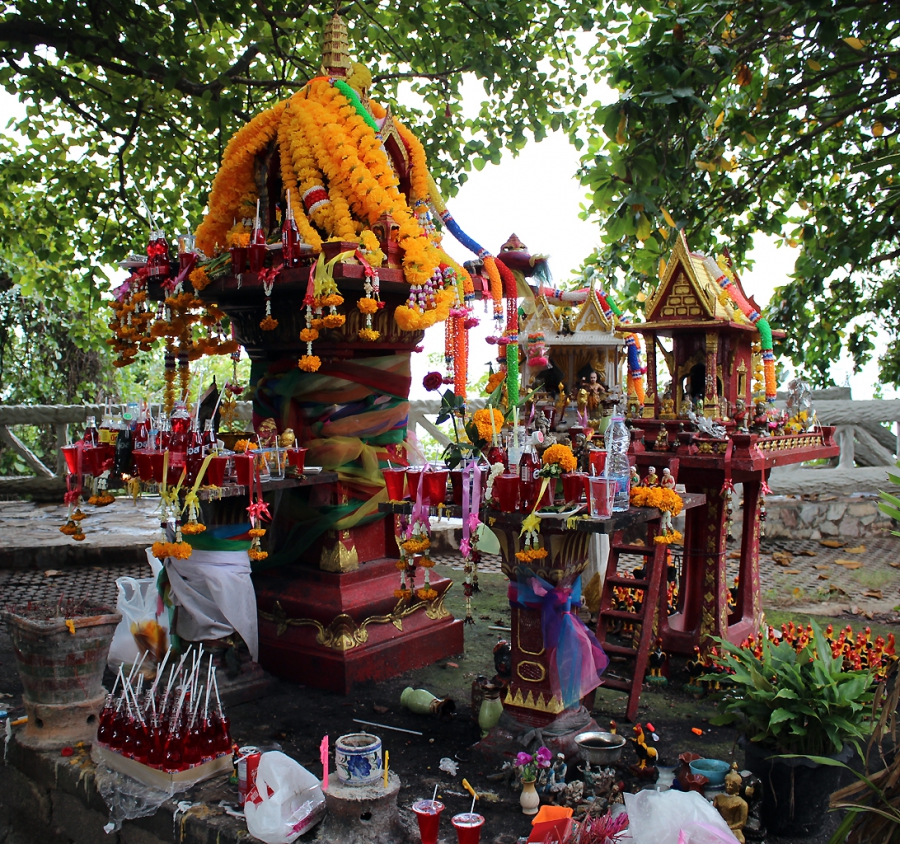 “The dark spirits won’t go so far as to kill you,” says Watcharapol “Jack” Fukjidee. He’s the 40-year-old host of Ghost Radio, a call-in program devoted entirely to paranormal activity in Thailand.

“But if Thai people have accidents,” he says, “people say it’s because they didn’t give offerings to the spirits.”

Fanta has been a choice spirit offering for decades — so long that millennial Thais often find this phenomenon to be utterly unremarkable.

But how, exactly, did this come to be? The answer, it seems, is buried under layers of folklore and ancient ritualism.

“It’s just a tradition,” says Chatgaew Pinjulai, a 50-year-old woman who sells Fanta and other spirit offerings by the roadside. “A very pervasive tradition.”

Angelic spirits like sweet things, she says, and Strawberry Fanta is nothing if not sweet. The typical Thai-sized serving is an 8.5-ounce bottle packed with 32 grams of sugar. It is a high-calorie, syrupy brew, perhaps best suited for beings that cannot gain mass.

Thailand is Fanta’s fourth-largest market in the world‚ bigger even than the US or China. There is no doubt that spirituality is helping driving sales.

Reps with Coca-Cola, the makers of Fanta, would not agree to a sit-down interview. But Kent Landers, a spokesman, said by email that Fanta’s ties to the spirit world are “not something we promote or market.”

The tradition, Landers says, “is related to a wide range of red-colored beverages in the market.”

This is true to a point. Yes, the color red is significant. The sweet elixirs offered to spirits are traditionally bright red. Thais will also offer cheap Kool-Aid-style cherry drinks or Fanta competitors such as Pepsi’s Mirinda.

“But red-colored Fanta is far and away the most popular,” says Chatgaew, the vendor. “It’s good stuff. One Fanta will get you 10 wishes.”

Spirits, once properly satiated, can offer multiple services. Their principal job is maintaining a no-fly zone over your home that swats away evil ghosts. But they will also warp the cosmos so that fortune falls upon the bringers of Fanta.

“You can ask them for anything,” Chatgaew says. “Let me be free from illness! May my relatives avoid traffic collisions! Give me smart and studious children! Anything you want.”

If you ever see 20 bottles of Fanta in front of a Thai home, she says, assume there’s a kid inside desperate to pass a looming exam.

Thailand’s spirit world is dazzlingly complex and nearly impossible to summarize. There are ghosts who appear as housewives and walk on the ceiling. There are ghosts with pinprick-sized mouths too small to ingest meals — suffering defined for food-loving Thais. 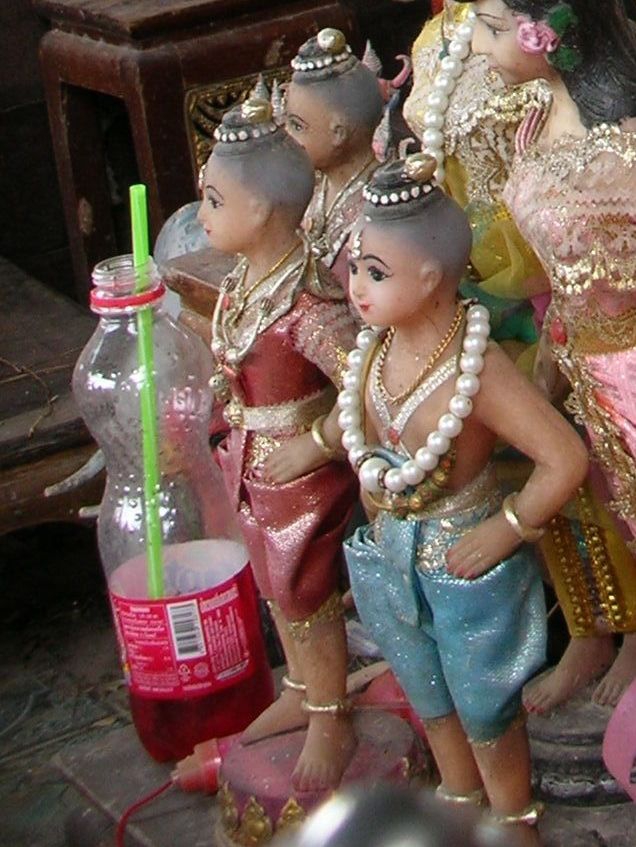 Kuman Thong figures at a shrine in Ratchaburi Province.

But the ghost that craves Fanta more than any other is an invisible toddler boy named Kuman Thong.

None of this derives from Buddhism, Thailand’s dominant faith. Placating household apparitions belongs to a more ancient practice generically known as “animism.” The closest corollary in European cultures is paganism, which also acknowledges many spirits large and small.

However, the two belief systems are sometimes muddled together — just as Christ’s resurrection is now mixed up with the Easter Bunny. You may hear Thais muttering Buddhist prayers before they crack open a Fanta for the angels.

“But don’t confuse this with Buddhism,” Jack says. “It’s all about beckoning angels to take care of you.”

That angels have sweet tooths and enjoy brightly hued soda seems plausible. But why do these apparitions crave the color red? That aspect of the ritual is murkier.

Unlike in Buddhism, Islam or Christianity, there are no authoritative bodies issuing diktats over animist beliefs. That leaves amateur believers to stake out their positions online.

Perhaps the most popular theory on Thai-language sites is also one of the most seductively intuitive. It posits that offering red liquid — such as Strawberry Fanta — harkens back to bloody animal sacrifice.

A Bangkok office worker wishing for a raise isn’t going to slaughter a chicken and lay it upon an altar outside her condo. But she may very well swing by the 7-Eleven and buy the next-best thing — blood-red Fanta — to placate her guardian angels.

But some spirit-watchers — including Ghost Radio’s Fukjidee — utterly deplore this notion. Angelic ghosts, he says, are strictly vegetarian.

“No, no, no,” he says. “Angels want fruit and Fanta and other nice things. They won’t touch anything bloody, nothing that was killed. Only a demon would be interested in that.”

He counters with his own theory. But it’s far less satisfying.

Spirit house worshippers will sometimes rest incense sticks inside glasses of water, he says. The incense sticks sold in Thailand are colored red with cheap dye. The dye, he says, sometimes melts into the water, tinging it red and creating a mental association between red liquid and ghosts.

The origins of Fanta’s spiritual aura may be fuzzy, Fukjidee says, but it is now impossible to dim. He cautions Coca-Cola against ever attempting to use its marketing might to sever the mental link between ghosts and Fanta.

“There’s no use,” he says. The link is too strong. Just try sipping a Strawberry Fanta in front of your Thai friends, he says — and brace for the teasing.