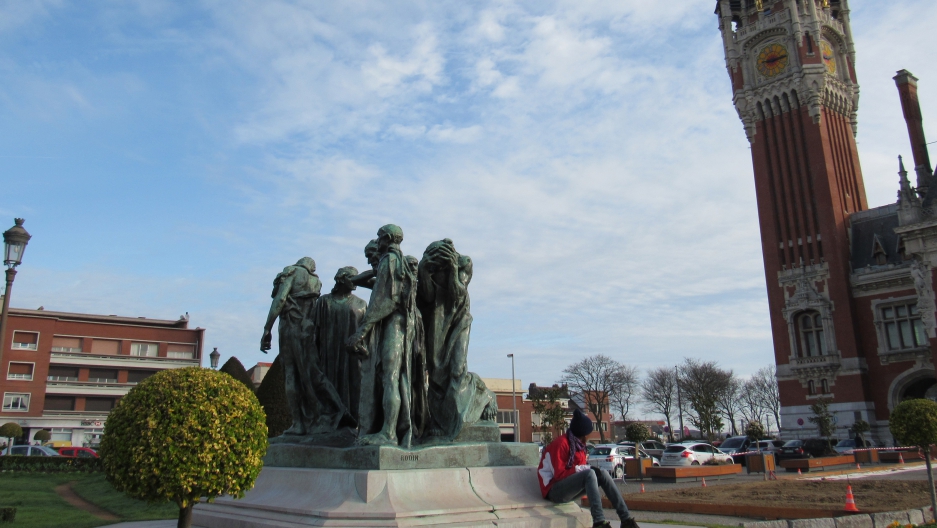 A young man looks towards Calais City Hall, at the foot of the famed Auguste Rodin sculpture, "The Burghers of Calais."

Seagulls circle above a deserted street near Calais’ seaport. A police van keeps a watchful eye at the entrance of the charity Secours Catholique. In the yard, there are two new portable shower trailers.

Volunteer Pierre Leleu says he spends his days shuttling migrant men between the day center in town and this facility so they can shower. Then the young men can get some refreshments and pick some clean clothes in the warehouse.

“And moreover, they can get rest,” he says. “They moved around all night to try and make it into England so they are tired. A shower will make them feel refreshed and help them regain some dignity.”

Today, the police seem to be tolerating this operation. But it wasn’t the case earlier.

The Calais “Jungle,” where over 8,000 migrants lived, was dismantled in October but it’s clear small groups of people keep arriving in the city. So this month, Calais’ mayor issued city ordinances restricting public gatherings and impacting food distribution. She said she wanted to prevent any camp from taking root again. A court threw those ordinances out, but the city of Calais continues to live on edge, at the northern front line of the migrants’ crisis.

When the Secours Catholique brought in portable showers in February, the mayor’s office parked a large dumpster in front of the charity’s yard to block it from bringing in more. A court ordered the city to remove the dumpster. But the charity’s director Vincent de Coninck says the police kept pressuring migrants after that. 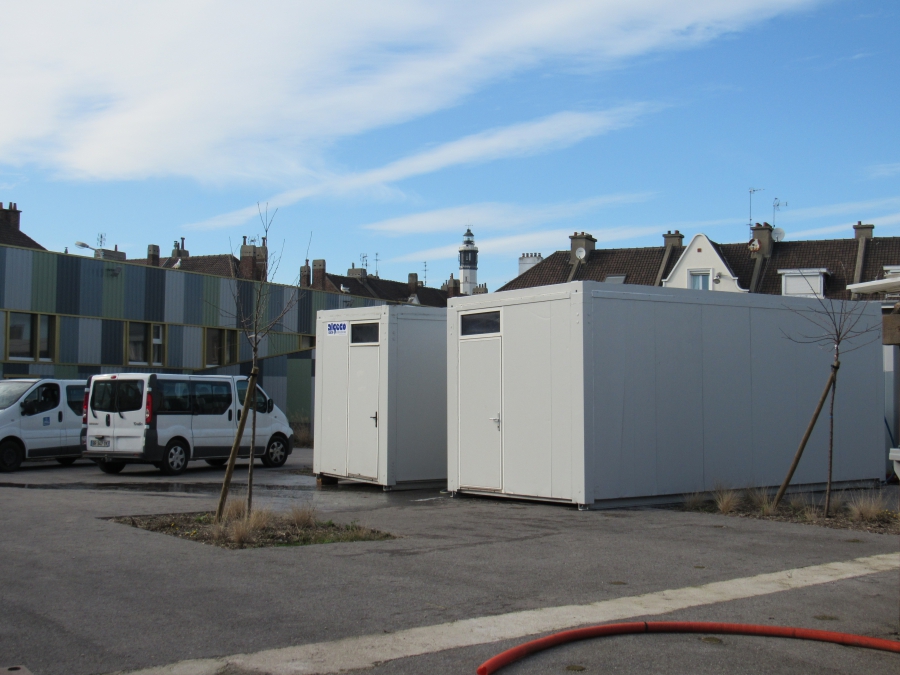 Calais City Hall tried to block access to those shower trailers in the yard of the charity Secours Catholique.

He added that migrants would typically spend an hour or two at the police station before the police would let them go. “They do it to discourage people from washing up,” he said.

Inside the charity’s large warehouse stocked with piles of neatly folded clothes, Zaccaria Adoun is looking for a clean pair of pants. Adoun is from Chad. Like most migrants who came here from Eritrea and Ethiopia, his goal is to reach the United Kingdom. He says he’s been attempting to sneak into England every night for the past two months he’s been in Calais. He goes from one gas station to the other, hoping to find a UK-bound truck.

“I’m going to keep trying until I make it,” he says, “because my brother is there and he got asylum.”

Adoun is only 16. He is one of many youths who turn up in Calais to do the same.

“We began seeing migrants returning to Calais in early January,” De Coninck says. “And the number has been growing every day since.”

Now that the mayor’s city ordinances restricting crowd gathering and food distributions have been thrown out, humanitarian organizations are relieved they can once again work without constraints. But there is no question people and the region’s economy have been impacted by the migrants’ presence.

Mickaël Wailly is a café manager in Calais’ old quarter. He says the presence of migrants chased away many British tourists. But the Jungle attracted a new clientele.

“We had a lot of journalists who came to see the camp and lots of British volunteers, too,” he says. “And that made up a bit for the lost tourists.”

He says he feels the city should help charities manage food distribution rather than attempt to forbid it.

Other residents see it differently, though.

On the edge of town, Jean-François Gratien runs an equestrian center, alongside the site of the former Jungle. He points to the brand new wooden fences the French government helped repair on his property after the dismantling of the camp. 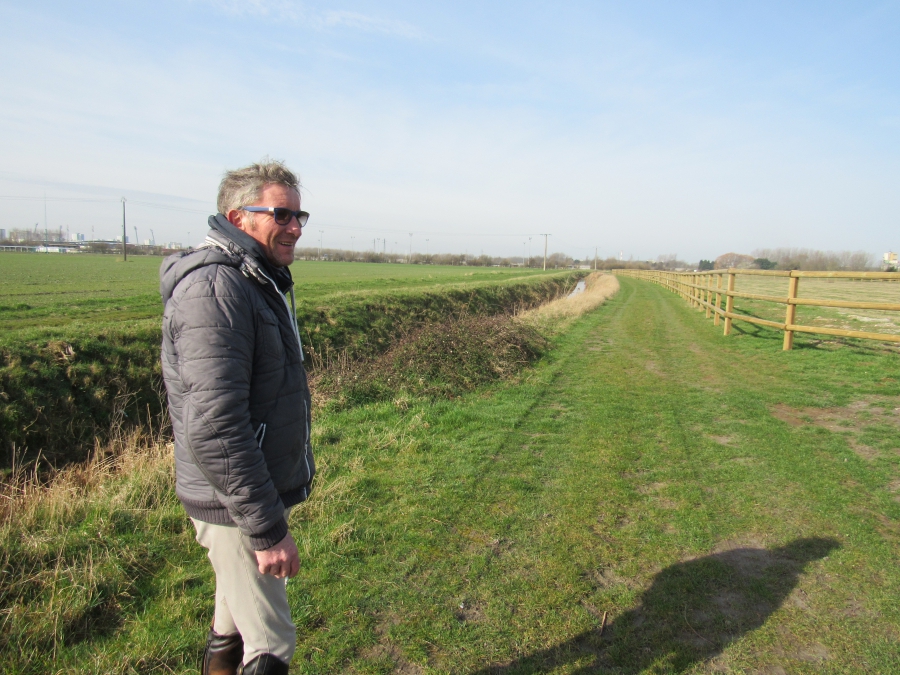 Jean-François Gratien runs an equestrian center in Calais, alongside the site of the former Jungle camp site. He says the French government helped rebuild his fences which were taken down by migrants.

“Everything was taken down,” he says. Gratien explains that migrants walked across his property every night to pick any wood that could help them cross the deep water ditches separating the fields. They’d use his property as a shortcut to get to the gas stations on the other side, where UK-bound trucks are parked, and avoid police checks on the roads.

“I could no longer take customers horseback riding along the paths here,” he said, “because the crowds would scare the riders and the horses too.” And there were many frightening moments for Gratien and his family, like the day he was taking young girls horseback riding. “A group of about 300 [migrants] showed up at the stables, and I got my rifle out and shot in the air to disperse them,” he said. That got him arrested.

Gratien says those two years next to the Jungle camp were traumatizing for his family who are barely recovering, financially and psychologically. “Somehow we are still haunted by all this,” he says. “That’s why this cannot start again.”

He says migrants should be helped, but he’s afraid allowing charities to feed them may lead to chaos again.

“It seems anti-humanitarian to say this,” he says, “but if we start doing this again, I’m sure we’ll have 10,000 migrants by summer. And then what do we do?”

Frédéric van Gansbeke has similar concerns. He’s the head of the Calais business association. He’s worried the government is not doing enough, especially when it comes to determining how many migrants actually are in Calais. According to charities’ estimates, about 400 migrants are hiding in plain sight in the city. Local authorities count only about 100 to 150 people.

“Once again, nobody knows how many there are and where they are, and this is exactly what happened two years ago,” he says. “And all of a sudden, boom! We had three-, four-, five-, six-thousand, and there were not enough border police to handle this.”

On this cold night, a few charities bring their vans to a soccer stadium back road where a crowd grows to about a 100 men over the course of the evening. You can hear the rumble of the highway headed to the English Channel tunnel nearby. Volunteers hand out hot halal food. They’ve run out of sleeping bags, but they’re still giving out blankets and warm clothes. Volunteer Laurent Vernet is handing out sneakers.

He says city ordinances or not, nothing will change the fact that Calais is a natural frontier with England and a magnet for people in exile.

“There aren’t too many passages to the UK,” he says. “Calais is one of the very few. So it’s natural people will regroup here. It’s geography, you can’t change that!”