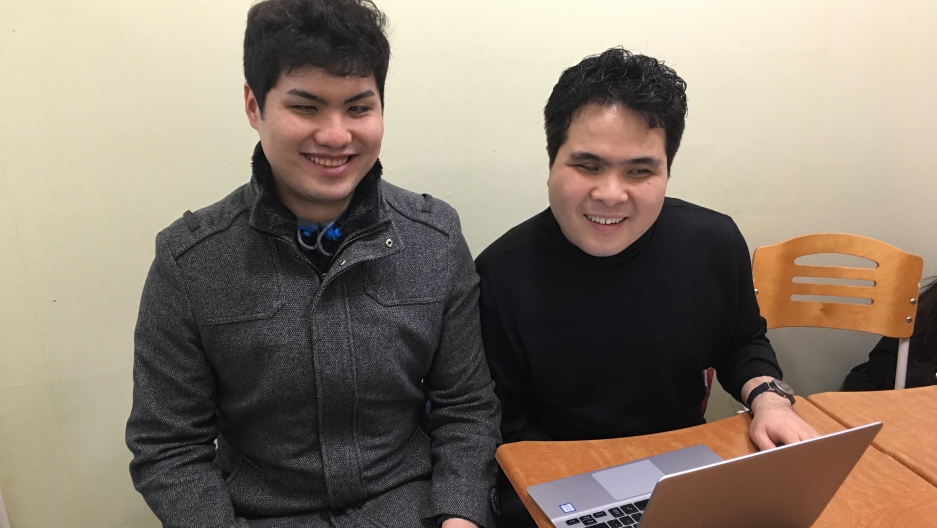 Lee Chang-hoo (l) and Kwon Soon-chul (r) started a baseball podcast, along with another visually impaired baseball fan. But they don't tell their listeners that they're blind. "They probably think we're just average, amateur sports fans."

Kwon Soon-chul recalls how as a kid he would tune in the radio to catch his favorite baseball team, the Doosan Bears. He says he was fascinated by what he heard coming over the airwaves.

“As a totally blind person, I can’t enjoy the game visually, so I concentrate on the sounds of the game — the catcher catching the ball, the batter hitting the ball. I like the energetic sound of the game,” Kwon, 35, says.

He points out that what annoys many sighted people about baseball is the same thing that makes it so accessible for the visually impaired — the slow pace. Other sports move too fast to follow, but baseball broadcasters describe the action on the field play by play, and there’s a lot of downtime to talk about things like a player’s stats, he explains.

These are the kinds of things he discusses with his two co-hosts, Lee Chang-hoon and Ko Jeong-hyun, on their popular podcast, “Weekend Baseball Why.” Lee and Ko are visually impaired too.

On the podcast, the three hosts give a weekly wrap-up of what’s going on in both the Korean and US Major Leagues, for instance, why the Minnesota Twins cut slugger Byung-ho Park from their roster earlier this year.

But their podcast is not just three blind guys talking about baseball.

They also feature two sighted panelists who weigh in on the game.

Kwon and Lee both have other jobs in broadcasting beyond the podcast. But that’s not the main source of income. All three men work either full or part-time as masseurs, too.

South Korean law, for decades, has given the visually impaired the exclusive right to work in the massage business (though some sighted masseurs have found loopholes to get into the market).

But Kwon says for many of Korea’s blind, it’s still the only job they can get.

“There aren’t many jobs here for the blind other than massage,” he says. “It’s the job we’re encouraged to pursue.”

The trio hopes to keep their baseball podcast going for as long as it can, even though they’re paying for it with their own money. Some of their expenses go to inviting professional sports reporters to come on the show.

“They’re so surprised that some blind guys understand the game and how it’s played,” says Ko Jeong-hyun. “I feel proud and it makes the 20 years that I’ve followed baseball all seem worth it.”