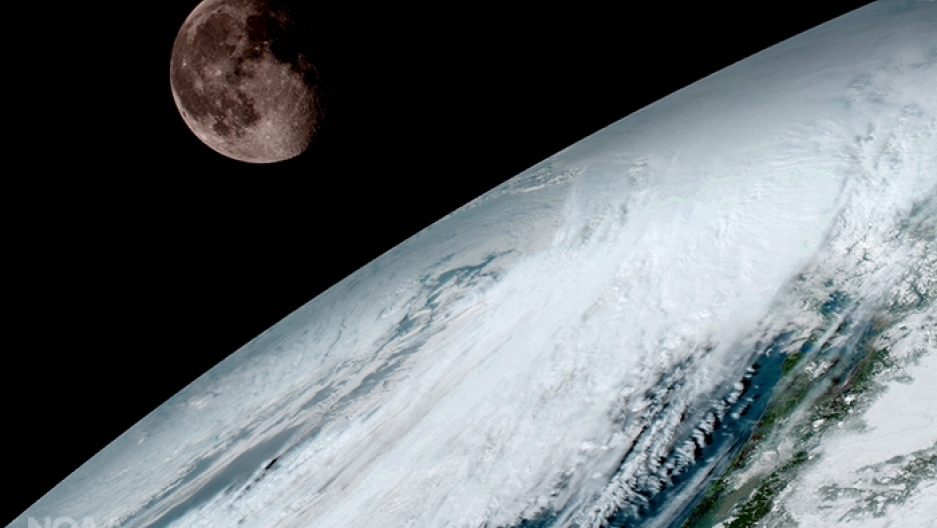 This shows the moon above the surface of the Earth, captured by GOES-16, on Jan. 15.

The mid-March blizzard that blanketed parts of the Northeast in several feet of snow may have been a freaky turn of weather, but it didn’t take us by surprise, thanks to the "eagle eyes" of satellites.

A week before the storm hit, a weather satellite run by the National Oceanic and Atmospheric Administration began monitoring the collision course of two low-pressure systems, from its position 22,300 miles above the Atlantic Ocean.

By the time the systems finally smooshed together, creating a giant, low-pressure system — and blizzard conditions — most people were prepared.

Weather-watching isn’t all we depend on satellites for. We also use them to relay television and phone signals, monitor atmospheric carbon levels and even aid in search-and-rescue missions.

“We tend to forget that space is the invisible infrastructure that we're all critically dependent on,” says Steve Oldham, senior vice president of the commercial satellite provider Space System Loral, headquartered in Palo Alto. “It's not just weather, it's communications. We have an expectation of a cellphone signal wherever we go, of connectivity anywhere on the planet, of excellent weather forecasting like NOAA provide.”

But unlike the terrestrial infrastructure we depend on for daily life, today’s satellites really can’t be repaired. Software fixes? Sure. But hardware can’t be replaced, meaning that most satellites are simply engineered to last a long time, and then they become space junk.

“We build our satellites with redundancy in the different parts so that if one part fails, we still have backup parts,” says Michael Stringer, the assistant system program manager for NOAA’s GOES-R satellites — the agency’s newest generation of geostationary weather satellites.

“NASA is developing a program that will refuel … low-Earth orbiting satellites called Restore,” he says. “And DARPA is producing an advanced system that will allow not just repair and life extension, but also assembly and augmentation of satellites in space.”

Last November, NOAA and NASA launched GOES-16, the first in a new series of weather satellites with powerful, modern features. As Stringer explains, “the GOES-16 is a total weather satellite, looking at the sun and its weather, looking at space weather right around the spacecraft, and most importantly, looking at the Earth weather.” (Check out some of the amazingly detailed images GOES-16 has sent back already.)

The GOES-16 also represents the pinnacle of weather technology in 2017: It can provide images of weather patterns and severe storms every 30 seconds. “It has four times the resolution of the current satellites, and it's five times faster than any other instrument,” Stringer says. The satellite features a brand-new geostationary lightning mapper, as well, which can detect in-cloud lightning before it strikes and help forecasters identify areas prone to lightning-sparked wildfires.

That kind of imaging could save lives, but GOES-16 is only designed to provide it for 10 years. (It’ll spend another five years orbiting as a kind of spare — another redundancy trick.) Altogether, there will be four satellites in the GOES-R series, and they’ll monitor US weather through 2036.

Current satellites like GOES-16 aren’t built to be taken apart and put back together, but Oldham says their lives could potentially be extended by robot satellites.

“We can do literally the same as you do with your car when you fill it up at the gas station: Unscrew the fuel cap and pour more gas in,” he says. “We can do certain amounts of repair. If an antenna is stuck, if it didn't deploy properly, for example, we can fix that.”

But the kind of “assembly and augmentation” that SSL and DARPA are working on will also mean that future satellites could be more modular — built with components that robots can swap out in space for functioning parts or the latest technology.

“I expect to see satellites that are built like our laptops, where you have the equivalent of a USB port, and you assemble the satellite using the USB port — you plug parts in,” Oldham says. “Later on, if a part fails, you pull that one out, you plug another one in.”

To put it another way, we won’t have to wait for the next satellite launch to incorporate new technologies. “Instead, you launch just that payload, just the instrument, and you plug it into the outside of your existing platform,” Oldham explains.

“And now, instead of going through the cycle of a large capital expenditure to build a satellite, followed by a lengthy period of operations, now NOAA and other users can constantly iterate and get the newest technology available much faster.”

There’s a lot left to do before we see robot repairmen in space, fixing a fleet of modular satellites. But the race is on. “At SSL, we're already building satellites that are modular,” Oldham says. “We have designs for those, we're working with our commercial customers on those.”

“It's an exciting capability, and we're looking forward to demonstrating the ability to do this plug-and-play through the DARPA mission.”