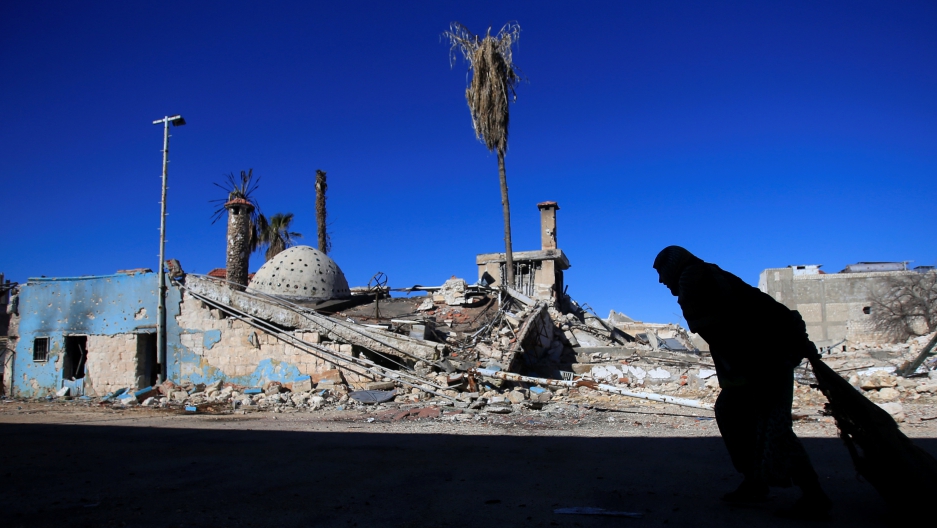 A woman walks along a damaged street in Aleppo, Syria February 2, 2017.

When Omran Daqneesh’s picture was taken after what was likely a Russian airstrike on a rebel-held neighborhood in the city of Aleppo, it went viral.

The images of the little boy staring into space in an ambulance, his face covered in dust and blood, catapulted Syria once again into the media spotlight.

Five-year-old Syrian Omran Daqneesh sits in the seat of an ambulence after an airstrike blew up his family's home in eastern Aleppo, Syria, in a photo taken by activist Mahmoud Raslan.

For months after, the siege of Aleppo dominated the news cycle — with the city alternately described as a “hell-hole,” a “slaughterhouse,” and “a holocaust.” Russian forces claimed to be targeting ISIS extremists with strikes that frequently hit civilian targets.

Now, in another city about 300 miles away, bombs are falling again to target ISIS. But this time it’s American bombs.

The Pentagon is investigating whether a March 17 US-led airstrike killed up to 200 civilians. If confirmed, it would rank among the highest civilian death tolls in an American air mission since the US went to war in Iraq in 2003.

While the civilian casualities in Mosul are generating media attention, the impact of airstrikes in Syria attracted far more.

Irish reporter and commentator Patrick Cockburn argues the disparity in coverage points to a double standard. In an opinion piece in The Independent, Cockburn writes that the situations in Mosul and in Aleppo are largely equivalent. But the players are different.

But, Cockburn says, "In the case of east Aleppo, the Syrian government and the Russians were largely blamed. In the case of Mosul, the blame has primarily been on ISIS holding human shields.”

It's an "us versus them" thing, the journalist argues. "In Syria, the [people getting bombed] were rather considered ‘our guys’ and the Syrian army and Assad and the Russians were thoroughly demonized. In Mosul, it’s the opposite. The Iraqi army is on our side. It’s the US-led coalition.”

Frantzman argues in a comprehensive blog post that airstrikes in Aleppo were far worse. Indeed, the offensive continued for six years. Assad and the Russians destroyed 60 percent of the city. There’s evidence to suggest the Russians purposely targeted hospitals. In Mosul on the other hand, Frantzman writes, “There doesn’t seem to be any evidence that US or coalition forces targeted hospitals [...] or that they did massive purposeful damage to the city. To compare the Russian bombing of Aleppo from 2012-2016 to the bombing of Mosul after October 2016," Frantzman continues, “purposely ignores the targeting of civilians and the harm done to them in Aleppo by the [Syrian] regime.”

Frantzman’s central point is that the two situations really can't be compared. And he thinks those who argue otherwise are pushing a point of view. "The main agenda behind many of those who claim the battle for Mosul is similar to that of Aleppo," he writes, "is to whitewash the crimes of Assad, excuse them and reduce them.”