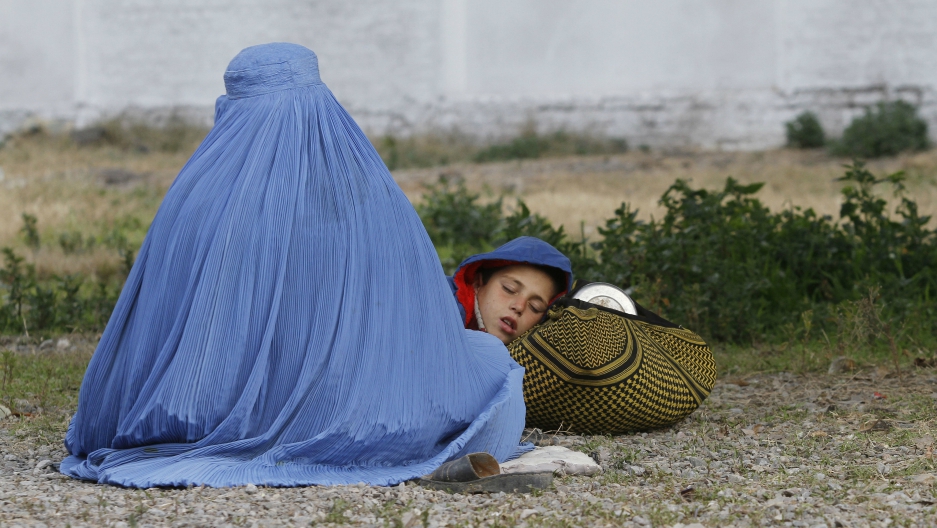 An Afghan refugee woman sits with her sleeping child as they wait with others to be repatriated to Afghanistan, at the United Nations High Commissioner for Refugees office on the outskirts of Peshawar, Pakistan, Feb. 2, 2015.

In the bustling border town of Peshawar, Pakistan, the lines form early these days at this government office that processes residence permits.

That's because Afghan refugees now live in constant fear of officials separating them from their loved ones or deporting them to their war-torn native country that many no longer consider home.

“The government of Pakistan has already deported my husband and my eldest son to Afghanistan,” said Afghan refugee Laiba Zeb, 27, who waited in line for hours at the registration office with her other remaining children.

Zeb was born in a refugee camp in Pakistan. She’s never set foot in Afghanistan. And like many others waiting here, she doesn't want to go to her so-called home. 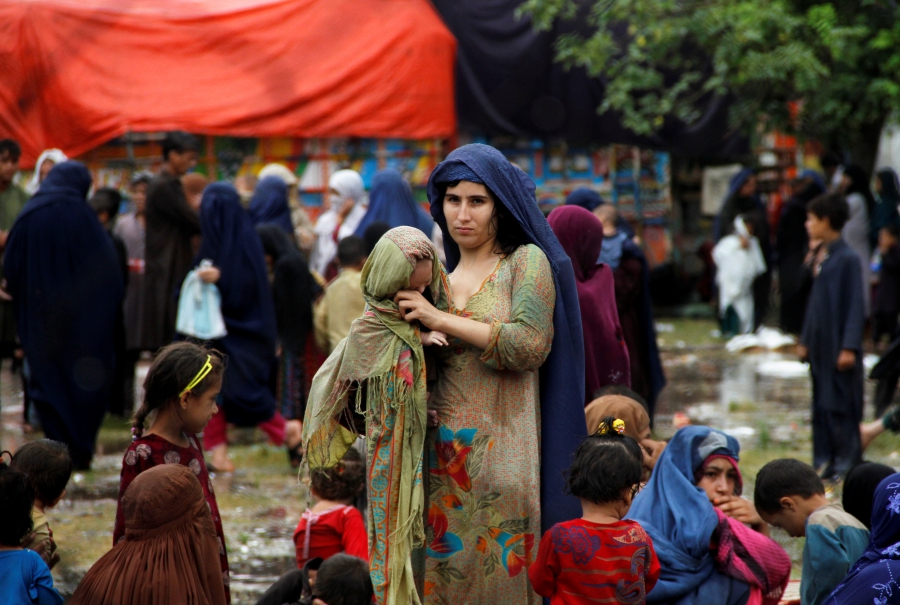 Families prepare to return to Afghanistan, at a UN refugee repatriation center in Peshawar, Pakistan, Aug. 2, 2016.

Last summer, Pakistan announced that more than 3 million Afghan refugees — some in the country since the Soviet invasion of Afghanistan in 1979 — needed to go home.

Since then, about 600,000 registered and undocumented Afghans refugees have been repatriated to an unstable nation where there are currently more than a million internally displaced Afghans. Rights groups and aid organizations have criticized Pakistan’s decision. Human Rights Watch has reported that the supposedly “voluntary” repatriation process is coercive and violates international law. The United Nations refugee agency warned that the mass forced return of Afghans could “develop into a major humanitarian crisis.”

More than 2 million registered and undocumented Afghan refugees remain in Pakistan, and Pakistan officials argue it’s become too expensive and too risky for them to stay.

“In recent terrorist attacks in Peshawar and Lahore, it has been established that Afghan refugees have been used as facilitators,” said Interior Minister of Pakistan Chaudhry Nisar Ali Khan at an Islamabad press conference late last month. “The Pakistani nation has been hosting Afghan refugees for the last 30 years and has looked after them despite its own problems.” 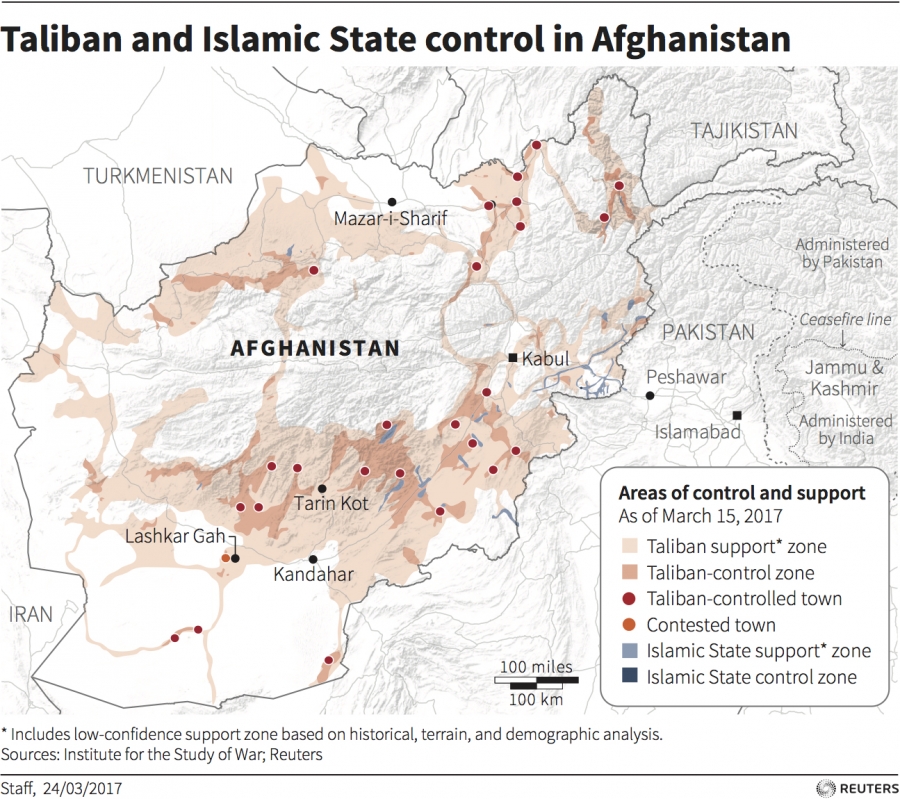 Map showing areas of control and support for Taliban and ISIS in Afghanistan, as of March 15, 2017.

Taliban fighters in Afghanistan and Pakistan have long crisscrossed the porous, mountainous frontier between the two countries to elude authorities. Pakistan has begun constructing fences along parts of the border and plans other measures to prevent illegal crossings. This month, the Pakistani government reopened the border with Afghanistan after sealing it last month following Taliban bombing attacks in the southern Pakistani city of Sehwan and other Pakistani cities.

Afghan refugees crossing the border face a grim future back in Afghanistan. Security has deteriorated amid the rise of ISIS in the country’s east and the increasing gains of the Taliban around the country. Meanwhile, unemployment stands at 40 percent.

“Many of them return to unemployment and destitution,” said Ahmad Shuja, an Afghan political analyst. “Many of the returnees become internally displaced because they cannot return to areas they left originally. This means that opportunities for education, reskilling and employment are extremely limited, as are any form of shelter and social or city services.”

For many younger refugees, especially those like Zeb who have never lived in Afghanistan, the adjustment is especially challenging. Some need to learn a new language, and many mourn leaving behind the lives they built in Pakistan — the only ones they know.

“Why are we being forced to leave the country where we were born, our kids were born?” Zeb asked. “Life will be complicated for us in Afghanistan. My husband had a decent electronics business here in Peshawar. Now we are unsure of our future in that country. No one cares about our ordeal.” 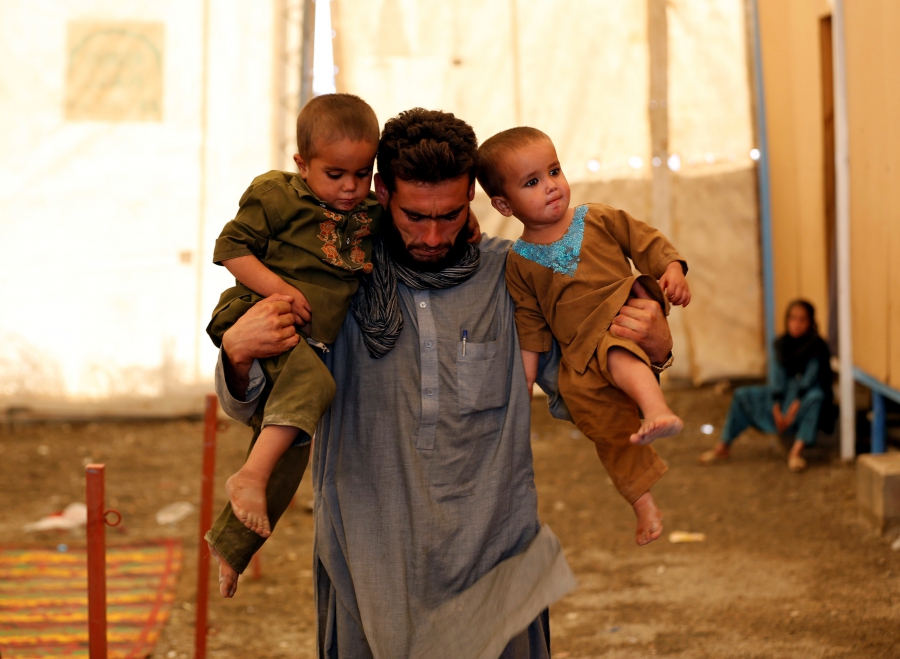 An Afghan refugee holds his children after arriving at a UNHCR registration center in Kabul, Afghanistan, Sept. 27, 2016.

Ehsan Ullah, 28, is one of the luckier ones. Born and college-educated in Pakistan, he moved to Kabul with his family in September — the day after his father was released from jail after the Pakistani police seized him from a local mosque, detained him for one day, never explained the arrest and failed to inform his family.

"We were comfortable in Pakistan but the Pakistan government did not allow us to spend our lives any further in Pakistan, so that's why we came back," Ullah said. "I was born in Pakistan, [our family] spent 35 years in Pakistan. But it was becoming really uncertain for us ... my life was [becoming] worse than a refugee's life. So after giving 35 years and not being able to get identity papers and having the police create problem for us — this was really painful for us — so that's why on the very next day we came back. When we crossed the border, I felt so relaxed, for the first time in my life."

Because Ullah speaks English, he landed a teaching job at a private university in Kabul and a management position at a government-run bank. Though he must improve his Dari — one of Afghanistan’s two official languages — he feels fortunate.

"The Afghan refugees are really in a painful situation in Pakistan,” he said. “They don't have a chance. If they go back to Afghanistan, they don't have jobs. I am educated so that's why I got a job. Not everyone is educated.” 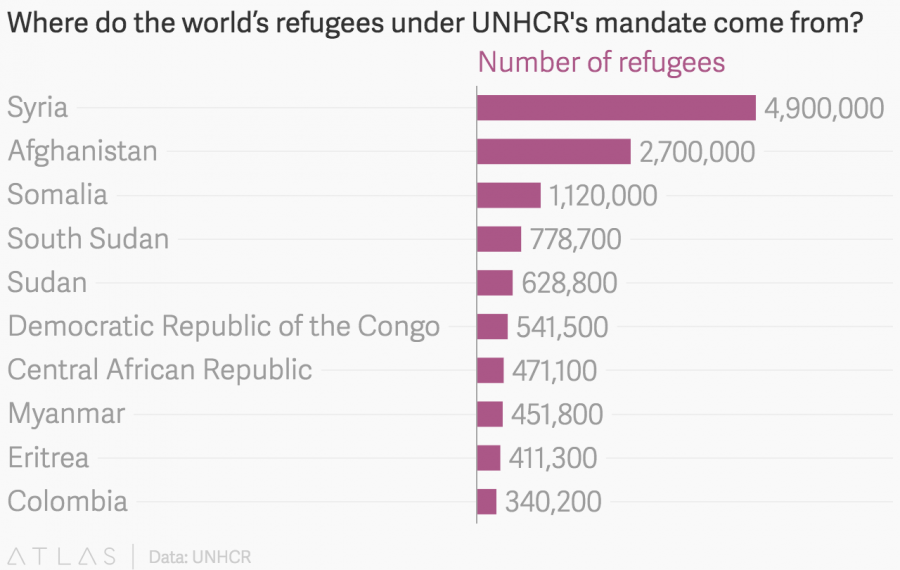 In Kabul, the Afghan government and aid organizations are working hard to reintegrate refugees but face a huge challenge, said Laurence Hart, who leads the UN’s International Organization for Migration in Afghanistan.

"We have to be careful not just to look at now, not just the flow of people coming back,” Hart said, “but how their host communities will actually manage to reintegrate and how to support them and also entice them to work with these returnees.”

On the eastern outskirts of Kabul, makeshift camps occupied by recently returned Afghan refugees from Pakistan have sprouted up beside the highway to Jalalabad to the east. The Afghan government doesn’t have the resources to accommodate them.

“It is something unexpected and, obviously if it's unexpected, the government, even the international organizations, are not ready,” said Edris Lutfi, who oversees refugees for Afghan Chief Executive Officer Abdullah Abdullah. “They are trying to do everything with the resources, although limited, that they have.” 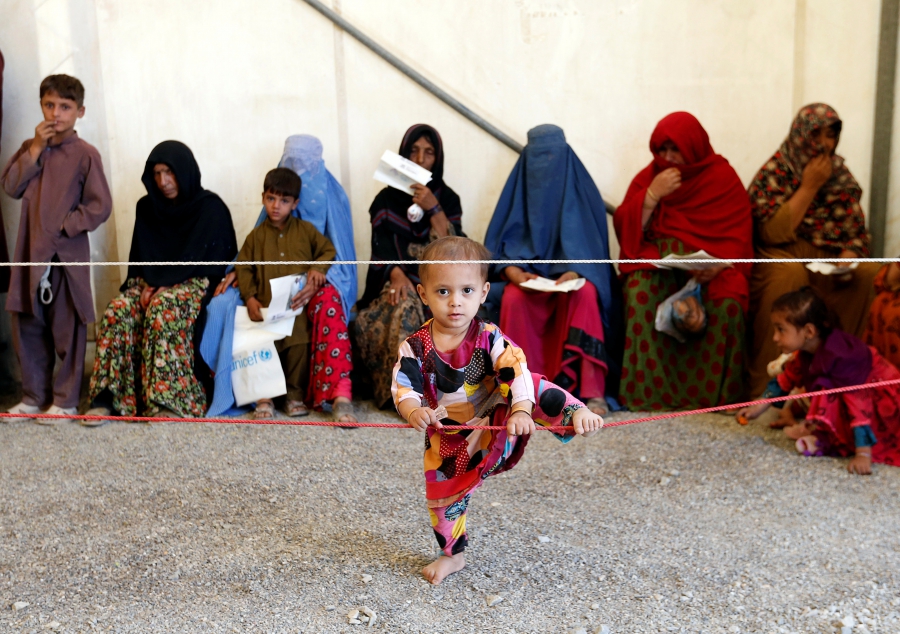 Afghan women sit with their children after arriving at a UNHCR registration center in Kabul, Afghanistan, Sept. 27, 2016.

Many families in the settlement live in mud homes. Schools are nonexistent. Men usually earn a few dollars a week working in temporary manual labor — a big change from their lives in Pakistan where many ran successful small shops and other businesses.

Mohammad Rasul, in his early 60s, lives in the settlement. After living in Abbottabad in northeastern Pakistan for 25 years, he and his family returned around five months ago.

“We left Pakistan because the police and army were harassing and insulting us constantly,” said Rasul. “They were asking for money — if you didn’t give it to them, then they would forcefully put us in the jail. Then we had no option but to bribe them in order to get out of the jail.”

“We would show them our refugees cards but they would not accept them, saying ‘We don’t recognize these cards, the cards are expired, you guys should leave Pakistan and go to your own country,’” Rasul recounted. 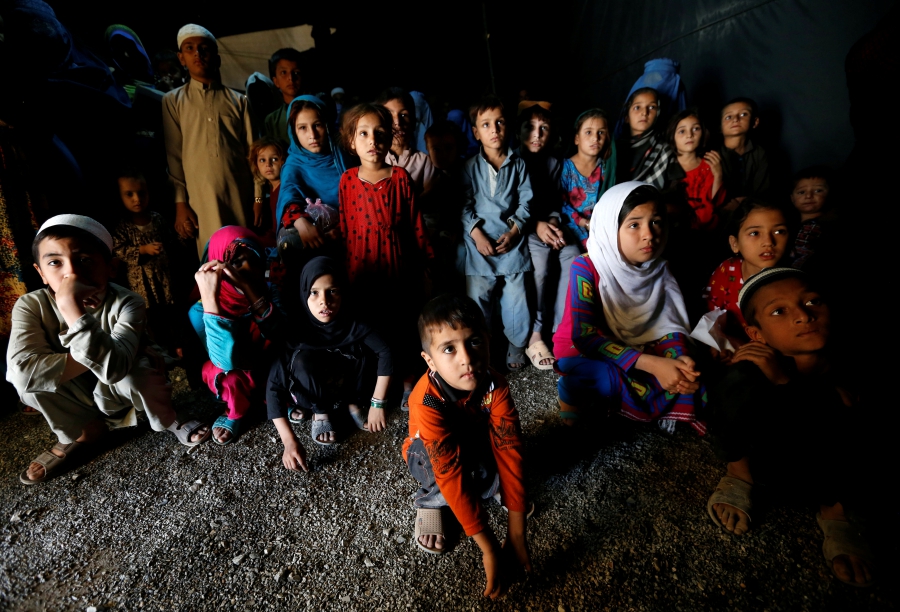 Afghan refugee children, returning from Pakistan, watch a short video about mine safety and explosives awareness at a UNHCR registration center in Kabul, Afghanistan, Sept. 27, 2016.

Back in Pakistan, Khadim Khan, a 22-year-old Afghan engineering student at the University of Engineering and Technology in Peshawar, is bitter about the situation.

“Suddenly the Pakistanis are calling the refugees terrorists, after carrying on the policy of ‘good Taliban’ and ‘bad Taliban’ now they have coined terms of ‘good Afghan’ and ‘bad Afghan,’” he said.

"Which terrorist activity have we the Afghan refugees been involved in? Has any refugee ever carried out a suicide attack?" he asked. “We are only paying the price of Pakistan’s own botched policies. It cannot curb extremism and the deportation is only being used as tool to settle issues with Afghanistan. There is no difference between Trump and the Pakistanis, in fact what they are doing to us is worse than [what] Trump [is doing].”

“The government is justified in its actions against the Afghan refugees,” said Hasnain, who lives in Islamabad. “The country has suffered a lot at their hands. We should send them back where they belong. In every country there are laws. Would anyone without proper documentation be allowed to stay in America?”

It's that sentiment from their neighbors that some Afghans say hurts the most. 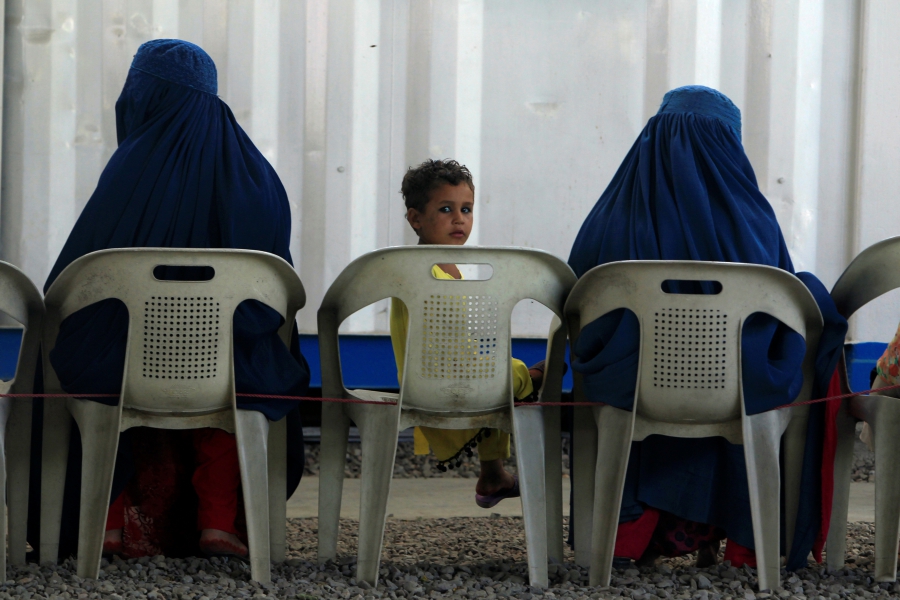 Ullah, the private school teacher in Kabul, says that while he is sad to have left Pakistan, he is somewhat happy to be in Afghanistan. He does not want to be considered an Afghan refugee anymore.