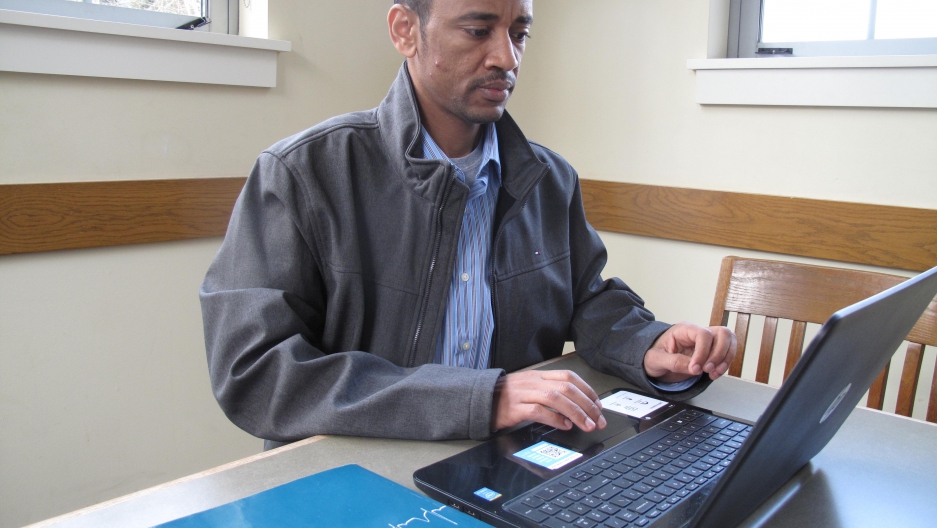 Semere Tsegay, a nurse trained in Eritrea, took part in a program at Highline College in Burien, Washington, that helps immigrants get back to the professions they held in their home country.

Ali Mufrej wants to be proud of himself again.

“Every time when I look at myself in the mirror I say, ‘Hey, you are a doctor, you have to be a doctor again,’” he said. Mufrej is from Iraq. In Baghdad, he administered anesthesia for thousands of surgeries, caused by C-sections, traffic injuries, and bullet wounds.

Mufrej remembers the look on his patients’ faces when the drugs kicked in. "The blessing sensation in my patients’ eyes,” he says. They started to pray for him because he took all their pain away immediately, Mufrej says.

But now, he’s far from his field and his main source of income is an eBay site where he sells salvaged car parts from his brother’s junk yard and Chinese imports. Mufrej calls it survival work.

For immigrants like him, professions often slip away as red tape, economics and other barriers can make it tough for trained professionals, like doctors, nurses and engineers, to work in their field.

While about a third of foreign-born people in the US hold a college degree, they’re less likely than US-born professionals to work in their field, according to the Migration Policy Institute, which calls the phenomenon “brain waste.” A network of organizations is trying to reverse it.

Helping highly trained foreign professionals return to their fields of expertise is important for the broader community, as well as for the immigrants themselves, says Liz Patterson, head of the Northwest Washington Welcome Back Center at Edmonds Community College near Seattle. It’s one of 11 resource centers in the US that are often based at community colleges.

As hospitals and clinics serve more and more people from different languages and cultures, employing health care workers from similar backgrounds can make the whole system better, she says. “When people are sick, when they’re hurt, they’re scared,” Patterson says. “If we can at least make them comfortable that people understand where they’re coming from, from a cultural perspective or from a language perspective, it improves the overall quality of health care.”

But first, foreign-trained health care workers must navigate a lot of red tape to work at their previous level again.

Expensive means $1,000 or more for nurses and tens — if not hundreds — of thousands of dollars for doctors and dentists.

Even obtaining old school transcripts can be a major hurdle, Patterson says.

No one knows that better than Mufrej. He tried to get his transcripts from back home — even flew back for them. Still, the country’s bureaucracy got in the way.

“I think I will get some way around it, I’m not sure how. I’m still thinking,” Mufrej says.

After acquiring the transcripts, Mufrej will have to re-do medical school in the US, graduate, pass the licensing exams and apply for (and get accepted to) a medical residency.

Mufrej is seeking guidance from the Puget Sound Welcome Back Center at Highline College south of Seattle. That’s where, on a recent Monday night, a group of nurses representing countries as diverse as Ethiopia, Kazakhstan, Nepal and the Philippines is prepping for the national nursing certification exam.

They must pass it to work in the US.

One student is Semere Tsegay, a nurse trained in Eritrea who smiles when he remembers helping deliver babies. “I like serving people with my profession,” he says.

But to help deliver babies again, he must have his international education evaluated by a private company, take an English exam, a nursing exam and get licensed.

Tsegay is working on it, carrying thick textbooks and his laptop to a library to study every weekday. In between, Tsegay works the night shift on weekends at a nursing home, dispensing medicine to the residents. He can’t wait to take on more responsibility.

“I’m excited to start my new career here in the United States as a nurse,” Tsegay says.

After months of hard work, he has an announcement for his nursing test prep class. Tsgay stands at the head of the class and tells his classmates: “I did it and I know you can do it.” They cheer and applaud.

Tsegay passed his exam to become a registered nurse.

Meanwhile, Iraqi doctor Ali Mufrej knows he has 12 years before he can celebrate. He doesn’t take it personally. “This is the law," he says. "This is the process, and I have to follow it."