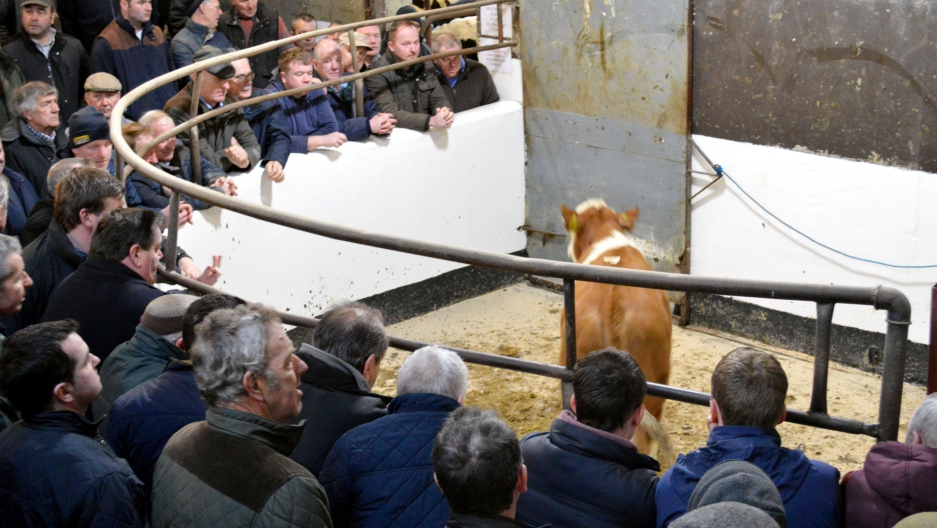 At the Camlough Cattle Mart, which serves Crossmaglen. Farmers are worried how competitive their beef will be in a post-Brexit world.

For much of the “Troubles,” the 30-year civil conflict that plagued Northern Ireland, the border between that country and its neighbor, the Republic of Ireland, was heavily controlled. Much of it was militarized.

Since the signing of the Good Friday Agreement in 1998, which ended the Troubles, that physical border has disappeared. On the short trip from Dublin to Belfast, for example, the only sign of having crossed the border is when cellphones change network providers, and the road signs switch from kilometers to miles.

In the past near 20 years of peace, the landscape of Northern Ireland has evolved from one marked with burned-out cars and army patrols, heavily fortified police stations, and belligerent murals to a place with new roads, peace-building community centers, museums and ritzy new shopping malls.

Crossmaglen, a small farming village just 3 miles from the border, is a microcosm of Northern Ireland’s societal change since the end of the Troubles.

The village was a notorious flashpoint for violence between pro-Irish paramilitary groups and the British Army. Signs reading “Sniper at Work” once dotted the village’s streets.

But today, the peace dividend is visible everywhere. The village is tidy and well-kept, and thanks to the nearby open border, business is brisk.

“The border is only down the road from us and we attract a lot of southern customers across it to our store,” says Frank McPolin, owner of the village’s new strip mall, Casey’s Eurospar. He estimates that customers coming from across the border make up some 40 percent of his business. But since the UK’s vote last year to leave the European Union, McPolin has been worried for the future of his business.

Wednesday’s triggering of Article 50 of the Lisbon Treaty, which starts the two-year process of rupture, was met with a general sense of dread in Northern Ireland, the UK’s poorest and least-developed region. Like Scotland, it voted overwhelmingly against Brexit and now many in the province, like McPolin, are resentful that Northern Ireland is being dragged out of the EU against its will.

Once the Brexit process is complete in 2019, the border between Northern Ireland and the Republic of Ireland will constitute the only land border between the UK and the EU. In line with the UK’s stated post-Brexit approach to immigration, and the strong likelihood that it will be no longer be part of the European Single Market, a hard border is expected to return once again between Ireland north and south.

“It would kill this area, business-wise,” says McPolin, as he mists plants in the supermarket window display. “We could handle fluctuations between euros and pounds but we couldn’t deal with a cut-off in the circulation of movement.”

Outside of his Eurospar store, more people worry over Brexit, but for different reasons.

“We’d have to stop farming,” says Patricia Bellow, as she carries bags of groceries to her car. Bellow, like the majority of farmers in Northern Ireland, depends on EU farming subsidies that will disappear with Brexit. Subsidies and grants from the EU currently represent some 85 percent of Northern Irish farm income.

All told, Brussels sends a total of $470 million in farming, infrastructure and peace-building grants to Northern Ireland, whose population is just 1.8 million, 3 percent of the total UK population. All this EU funding will vanish in 2019.

On top of that, with the current conservative and nationalistic political culture in England, analysts predict a gradual reduction in the annual $12.5 billion transfer in funds that Northern Ireland receives from London.

“It’s likely that by 2019 – 2021, Northern Ireland will be facing a crisis in its public finances not only because of the impact of it leaving the EU but also because the British government is simply not going to chip in any more money in the way that it once did when it would say: ‘Oh here you go, Northern Ireland, here’s tons of cash to keep you from fighting each other again,'” says Kevin Meaghar, a commentator and former adviser on Northern Ireland to the UK government.

Back in Crossmaglen, it’s not just the loss of EU subsidies that is concerning farmers. They worry about how competitive their beef will be in a post-Brexit world of bilateral trade deals.

“If the UK makes a trade agreement with, let’s say, Brazil or Argentina, then they’ll be looking to sell something back and I do believe that, in those countries, the beef trade is a lot cheaper than it is here,” says Brendan Reavey, manager of the Camlough Cattle Mart, which serves Crossmaglen.

Reavey is quick on his feet. He yo-yos between the counters at the entrance to the building, where farmers cash in their bidding chits, and the site of the mart's main action: a muddy kind of amphitheater, where some 350 farmers size up and cast bids on livestock paraded in a pen.

Among those farmers is Martin Rafferty, who has just bought nine new cattle. When it comes to Brexit, he says he is concerned, yet composed. The exact terms of the UK’s exit have yet to be defined, he says, so for the moment, there’s nothing anyone can do.

Rafferty knows Brexit will be bad for farmers like him — he just doesn’t know how bad.

“It’s the million-dollar question,” he says as he gets ready to load his new cattle into his livestock trailer. “We’re all living on the top of the ditch at the minute and we’re not sure if we’ll fall left or fall right, but we are going to fall.”