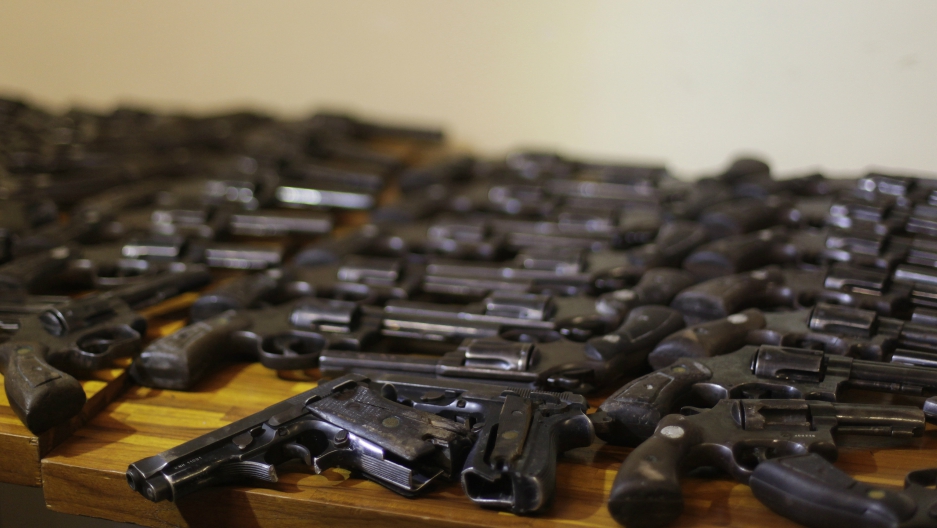 Guns delivered during a disarmament campaign are displayed in Rio de Janeiro, Brazil, May 6, 2011.

Brazil has a murder problem. It also has a gun problem. Both could get worse if some Brazilian lawmakers have their way.

One out of 10 homicide victims around the world each year is a Brazilian. Most of the roughly 60,000 Brazilian citizens violently killed each year die from gunshot wounds. And the majority of the guns doing the killing were made in Brazil. The country is the fourth-largest firearms and ammunition manufacturer on the planet.

These facts — soaring gun deaths and gun production — are not coincidental.

A small group of Brazilian lawmakers is on the verge of worsening the country’s homicide epidemic. Rather than tighten responsible firearms legislation, the so-called Bullet Caucus wants to make weapons even more accessible and untraceable. Their proposed legislation, Bill 3.722, would permit anyone over 21 to own up to six weapons with access to 100 rounds per firearm each year.

Related: In Brazil, where the homicide rate is five times that of the US, a new push to relax gun laws.

In Brazil — as in virtually every country in the world other than the US — gun ownership is a privilege, not a right. Registered firearms owners are permitted to own a restricted number of weapons, and it is currently illegal to carry guns outside your home without a special permit. In order to ensure guns don't go walking, firearms must also be registered with the authorities every five years.

The Bullet Caucus is committed to weakening Brazil’s gun laws. For one, they are demanding that the age for legal gun ownership be reduced from 25 to 21. They would also like to endow all gun owners over 25 with the right to carry concealed weapons. What's more, they are calling for a one-off registration process for firearms and increased access to gun ownership, including for people under criminal investigation.

The Bullet Caucus is appealing Brazil’s Congress to urgently put Bill 3.722 to a vote. This is hardly surprising since they stand to benefit handsomely if it’s passed. At least 30 elected politicians — including 21 recently elected federal and state deputies from 12 separate parties — received contributions totaling at least $530,000 from the arms and munitions industry in the lead up to the 2014 presidential election.

The loosening of Brazil's gun laws is good for gun manufacturers.

The arms industry is big business in Brazil. If all defense products are considered, the sector amounts to roughly $60 billion annually, of which approximately $350 million involved exports of small arms and ammunition in 2015. While many industrial sectors have faced shortfalls and cuts during Brazil's prolonged economic recession, the defense industry received sizable cash injections. Total military spending by Brazil's Ministry of Defense jumped to $27.4 billion in 2016, a 36 percent increase over the year before.

Efforts to loosen Brazil's gun laws are described by the pro-gun lobby as a means of empowering “good citizens” and ensuring their “self-defense.” They often rely on simple anecdotes to make their case — stories of ordinary, upstanding people who successfully defended themselves or their spouses against a “bandit.”

These arguments are lifted straight from the National Rifle Association playbook.

They are also false.

For every successful deterrence, there are hundreds more cases of people being killed or injured in the process. The idea that arming civilians makes societies safer is a myth: Research shows that for every 1 percent increase in arms in circulation in Brazil, there is a 2 percent increase in homicides. 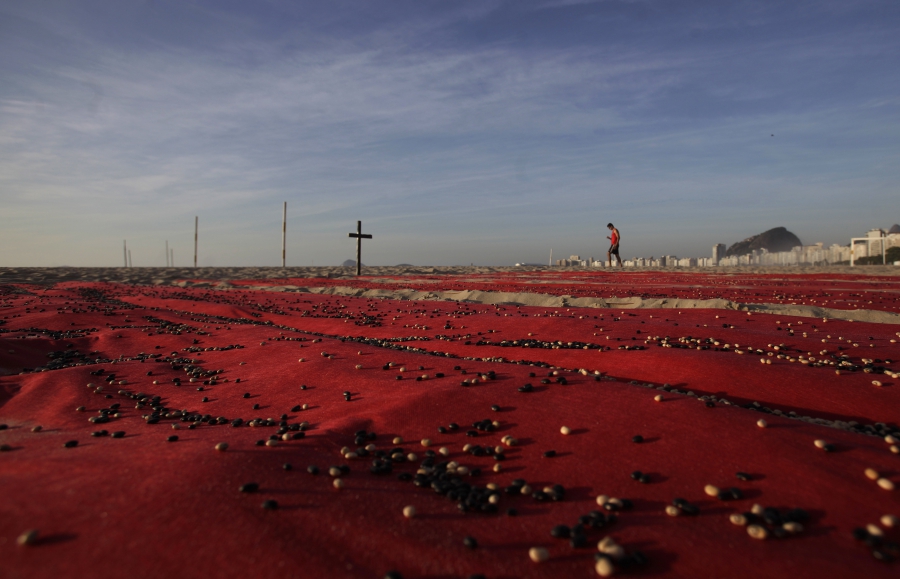 To raise awareness of the higher murder rate in Brazil, the nongovernmental group Rio de Paz placed about 500,000 beans over red sheets to represent the number of people killed over the previous 10 years in Brazil. This photo was taken in Rio de Janeiro, Dec. 5, 2012.

There are other misconceptions peddled by pro-gun advocates that need to be cleared up. Contrary to what they claim, greater access to firearms does not reduce violent and nonviolent crime. The evidence from countries like the US convincingly shows the opposite: States that have relaxed gun laws have registered sharp increases in homicides, robberies and home burglaries.

Pro-gun advocates also claim citizens need guns to protect their homes and families. But that’s not what the evidence shows. More arms in the home actually increase the risks of suicide, accidents and intimate partner murder. Virtually all experts agree on this point, even if gun advocates claim the opposite.

The science of gun legislation matters fundamentally. It shows overwhelmingly that responsible gun legislation prevents violent deaths and other forms of victimization. And for its parts, Brazil's disarmament statute is credited with reducing homicides by 12 percent between 2004 and 2007. Had the statute not been implemented, at least 135,000 more Brazilians would have been murdered since 2004.

All Brazilians want safer cities and streets. Every Brazilian agrees that children should walk to school without fear of being killed or injured by a stray bullet. The answer is not to arm more citizens indiscriminately. This is the height of irresponsibility and will make Brazilians more, not less, insecure. To the contrary, Brazil needs to limit the number of firearms in circulation to avoid preventable death and injury.

An obvious part of the solution to reducing gun violence is strengthening responsible firearm legislation. In Brazil, this means enforcing, not weakening, the disarmament statute. And it means strengthening national registration systems and enforcing robust firearms licensing and regulation procedures.

Gun regulation is a necessary but insufficient condition of making Brazilians safer. If Brazil wants to drop its homicide rate, it must also invest in law enforcement and prevention resources to areas where violent crime concentrates. This requires improving police training, oversight and community relations. It will take a whole-of-society effort to address the inequality, unemployment and uneven educational opportunities that drive violent crime, to begin with.

Robert Muggah is the co-founder and research director of the Brazil-based think tank Igarapé Institute. Daniel Cerqueira is an economist with the Institute for Research on Applied Economics (IPEA) in Brazil. Along with more than 50 other researchers, they are signatories to a manifesto opposing the weakening of Brazil's gun regulations.