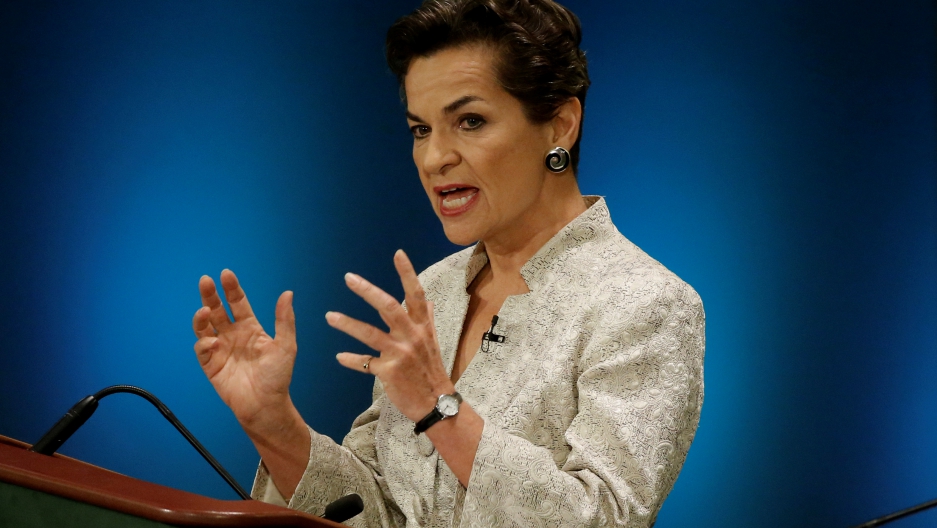 Christiana Figueres, who led nearly 200 countries to a hard-fought international climate change agreement in December 2015, says the US policy changes are a “sad commentary” on the worldview of the current administration, but that other countries remain dedicated to the UN climate agreement.

“This is a multilateral treaty that has already been ratified by 140 countries and counting, and it’s definitely not at risk,” Figueres said in an interview with The World.

“One country can choose to park itself, if you will, on the sidelines of a highway that is very quickly taking us toward decarbonization, but [that] does not change the direction of travel of all the rest of the countries.”

Oliver Geden, of the German Institute for International and Security Affairs, told Reuters that a US withdrawal would badly undermine the Paris agreement. Any decisions would be largely irrelevant without the world's biggest economy, he said.

"The momentum could fade away pretty soon," he predicted.

President Donald Trump signed his “Energy Independence” order Tuesday afternoon to roll back the Clean Power Plan, an Obama-era regulation that would have required states to cut carbon pollution from electricity generation by about a third by 2030.

The plan, which had been stalled in the courts and had not yet gone into effect, was a significant part of how the US planned to meet the carbon cuts it promised in the Paris agreement. It would have led to a steady decrease in the use of coal in power plants in the upcoming decade.

In comments made shortly before he signed the executive order, Trump said it represented “an end to the war on coal.”

Trump also announced he would lift a moratorium on the leasing of new federal land for coal mining, and make other regulatory changes to reverse President Barack Obama’s efforts to limit climate change.

President Trump signed the order at the Environmental Protection Agency headquarters surrounded by a group of coal miners. He repeated a promise he made often during the campaign that he would end regulatory overreach to put coal miners back to work.

“We can actually achieve good jobs, good growth and pro-energy policies at the same time as protecting our environment,” said EPA administrator Scott Pruitt, “and the president is sending that message by this signature today and this executive order.”

Figueres argues the opposite: that as demand for renewable energy and jobs in the sector grow globally, Trump’s policy changes will leave the US straggling behind other world powers in clean technology jobs.

“I’m actually deeply concerned for the US economy,” Figueres said. “By setting itself away from the path toward decarbonization, the US is only making its economy less competitive. And that means, with less competitiveness, there are less domestic jobs.”

Wind and solar jobs in the US have been increasing in recent years as jobs in coal mining continue to decline. There are about 50,000 jobs in coal mining now, as automation, cheap natural gas and increased regulation has steadily decreased employment in that sector.