Fourteen wind turbines on the shores of Lake Erie power enough energy for about 10,000 homes. One of the world’s largest steel mills formerly occupied the site.

It’s easy to pick on Buffalo: It’s cold, it’s snowy, the economy has been in the dumps for four decades, and the Bills lost four straight Super Bowls. (Just sayin’.)

But around the turn of the 20th century, Buffalo was THE place to be. It had the most millionaires, per capita, of any city in America. It hosted a World’s Fair. It was a bustling inland port, the terminus of the Erie Canal, with hulking grain elevators and steel mills.

One of the world’s largest mills used to stand on the shores of Lake Erie. These days, all you hear is the wind roaring off the water. For Paul Curran the managing director of BQ Energy, that’s the sound of opportunity.

“We’re standing at the bottom of turbine #1, there are 14 turbines in all that generate 35 megawatts of electricity,” says Curran. “Today it’s a bit windy, which is good for business.”

His turbines supply enough power for about 10,000 homes.

Driving around the 1,200 acre site, you see industrial ruins alongside wind turbines and rows of solar panels. It’s something of a success story — repurposing toxic, polluted land in a way that’s helping combat climate change. But it’s not a jobs story.

“There used to be something like 25,000 jobs on the land we’re sitting on right now, today there are zero,” says Curran.

But projects like this could become a Buffalo jobs story. Right now, Curran buys many of his parts from overseas, and “to the extent that they were made here in Buffalo, that would great for us as a consumer of that type of equipment,” he says. 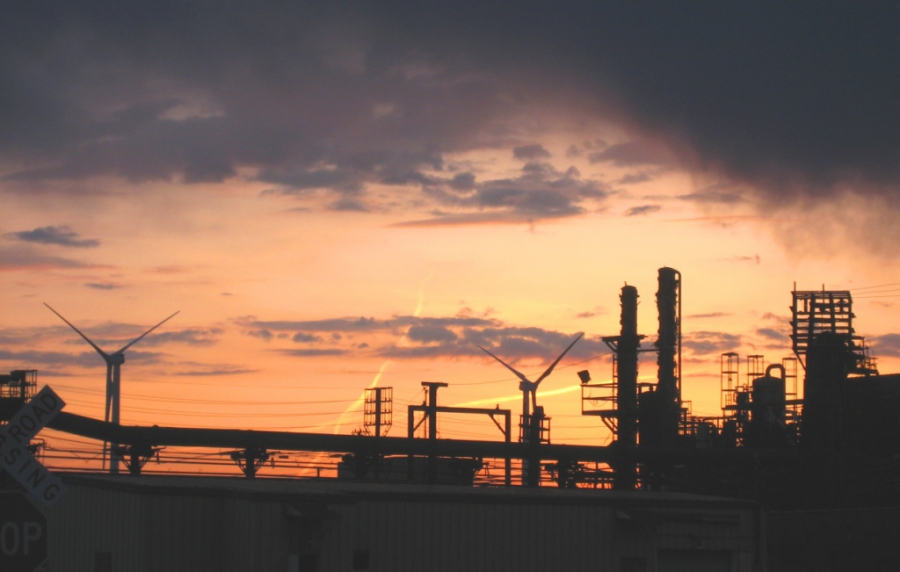 Nearly 25,000 people used to work at the old Bethlehem Steel site on the shores of Lake Erie. The company laid off most of the workers there in the 1970s and '80s.

That’s what the state of New York is betting on, trying to create a so-called “cluster economy” for clean technology.

A few years back, New York’s Governor Andrew Cuomo spearheaded the “Buffalo Billion” initiative — pumping a billion dollars into the area. Three-quarters of that total went toward building a massive solar panel factory that is now being rented out to California-based SolarCity. That partnership is expected to bring about 1,500 jobs to Buffalo and eventually create about 5,000 jobs statewide.

Critics argue that’s a lot of public money for a few thousand solar jobs. And it’s certainly not how President Donald Trump thinks things should be going. The president sees America’s future in old-line industries: things like coal and oil.  Zemsky doesn’t worry about that.

“What President Trump decides to do or not do with respect to renewable energy will prove in history to be an asterisk or a bump in the road,” Zemsky says.

President Trump talks a lot about reviving depressed places like Buffalo. But a bustling Erie Canal and steel mills — those are not coming back.

So, Zemsky says, the state has to look forward, making investments for the long term.

“The compelling, obvious compelling reasons why we should be supporting clean energy don’t go away because Trump decides it’s not a priority for him,” says Zemsky.

The Buffalo Billion also dovetails with the governor’s climate strategy: to dramatically cut greenhouse gas emissions and generate half of the state’s electricity from renewable sources by the year 2030. And the he state recently announced plans for a second Buffalo Billion (which is actually a half-billion dollar investment, but that doesn’t sound as catchy).

The state isn’t just betting on large-scale projects to achieve its goals — it’s trying to lure entrepreneurs to Buffalo with an annual business plan competition that it dubs the largest in the world. It’s called 43North, named for the city’s latitude, and it doles out $5 million in prizes annually.

Daniel Shani grabbed $500,000 for his start-up, Energy Intelligence, a company designing a new way to generate electricity. He shows me a rendering of his product.

“What you see is a flat, wide mat that lays right on top of the road surface. And as vehicles drive over it, they’re pushing pressurized fluid through embedded channels, so it’s a hydraulic-based system to ultimately spin a generator.”

Translation: The weight and motion of cars and trucks creates power.

Shani is testing his mats at a local parking garage, as well as at the Peace Bridge connecting Buffalo to Canada. The bridge can use the energy generated from the mats to power things like lights and toll booths on site: “So from the truck traffic that they have crossing the bridge every day, we could cut their electric bill in half.”

That could amount to $400,000 in annual savings. And again, more green energy would be produced in the fight against climate change.

When Shani won the prize money from 43North there was a string attached — he had to relocate from Brooklyn to Buffalo for a year. He did, and has actually stayed for another 18 months. He’s sold on Buffalo.

“There’s tons of new development, lots of new bars and restaurants, and just a wonderful quality of life. And the cheap rent is nice compared to New York City,” says Shani.

I asked how his rent in Buffalo compares to Brooklyn.

Shani says, “Let’s just say it’s less than half of what I’m paying in Brooklyn.”

Shani and other prize winners share a rent-free, open-plan work space downtown. The idea is to get a bunch of smart people in the same room sharing coffee and ideas. 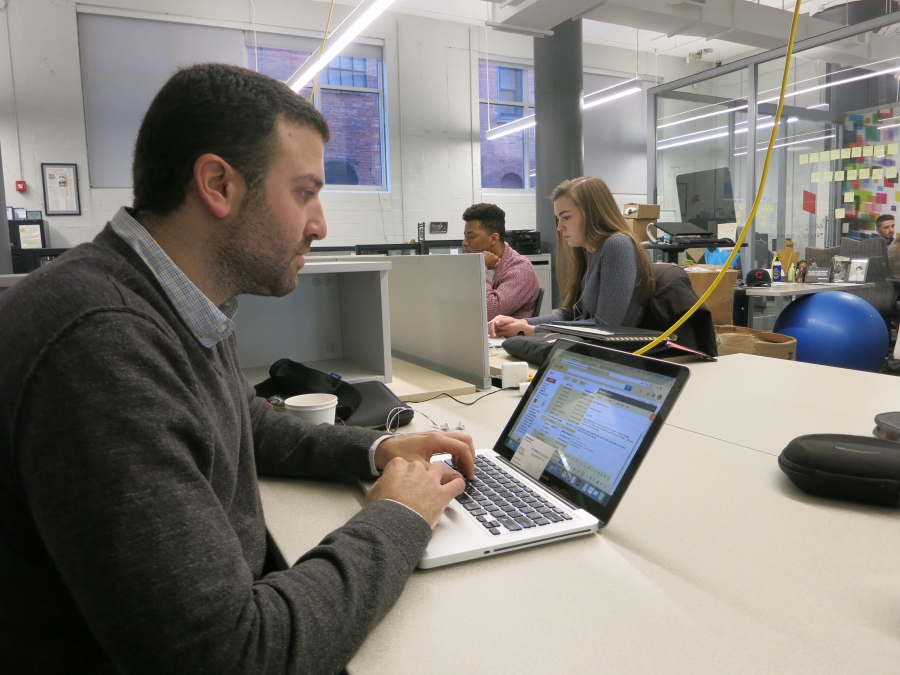 Daniel Shani, left, works out of 43North, a business incubator near downtown Buffalo that houses about 50-60 people.

The boosters are rightly proud of the buzz in Buffalo. But cynics say, let’s not get too carried away. Buffalo is still America’s third poorest big city.

Robert Shibley, dean of the school of architecture and planning at the University at Buffalo, says the city can’t sugarcoat things. But the data show they’re moving in the right direction: Buffalo has had more than three years of month-after-month job growth.

“Not since World War II have we seen that. So that’s something to be really positive about. We see number of firms, number of employees, wages, all ticking up for the first time in decades,” says Shibley.

Advanced manufacturing is helping to fuel that growth, Shibley says, and green energy is very much part of the new matrix.