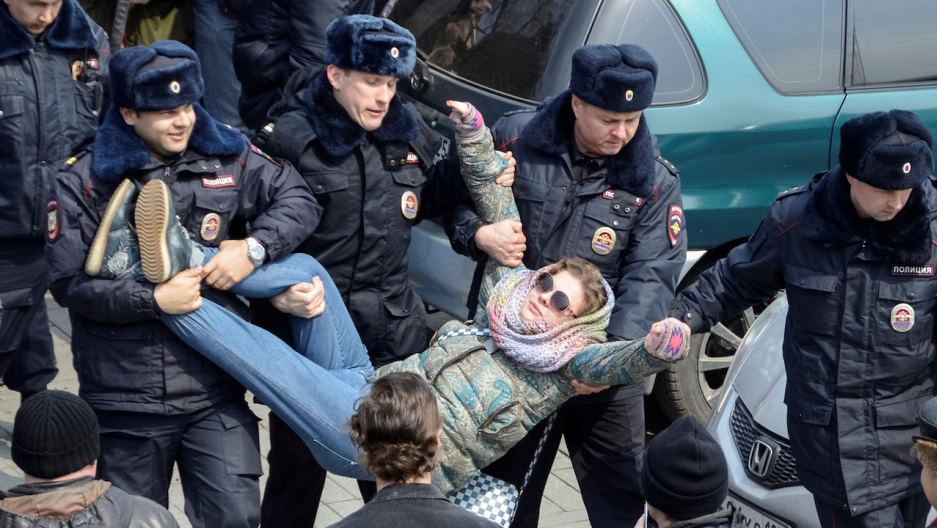 Going into Sunday, no one really knew how many people would show up for the “anti-corruption” rallies across Russia. But show up they did.

Independent estimates say some 60,000 Russians defied strict government, anti-assembly laws in more than 90 cities across Russia — the largest turnout against the Kremlin since mass street protests in 2011. Then as now, hundreds of people were arrested for protesting without permission.

But Sunday’s rally also proved a test of the power of the internet.

Russian opposition leader Alexey Navalny is a taboo subject for most of Russia's official, state-run press. He organized the event using social media, just as he used it to publish a hard-hitting investigation earlier this month into the lavish lifestyle of Prime Minister Dmitry Medvedev.

In a YouTube video, Navalny's Anti-Corruption Foundation alleges Medvedev misappropriated funds for charity organizations to acquire a yacht, a vineyard and several mansions — one even with a separate small house for his pet ducks. That last detail has taken off with protesters, many of whom carried rubber ducks on Sunday. There were plenty of duck memes online, too.

Medvedev has ignored Navalny’s charges, just as the government and state media has ignored the protests.

But Ilya Feodorov, who went to the demonstration in Moscow, says the Medvedev video shocked him into action. Feodorov, a student at a Moscow university, says he's never really engaged in politics, but now he wants to see an investigation.

Younger Russians seemed to dominate Sunday's rallies, despite threats from authorities that they would face fines and imprisonment.

Many of them were swept up in police raids along with Navalny and other organizers. On Monday, a Russian court sentenced Navalny to 15 days in prison. Navalny cohorts from the Anti-Corruption Foundation also face extended jail stays over their role in organizing the rally online.

Authorities will now have to decide whether they want to be as strict with young Russians caught up in the street melee.

In fact, analyst Feodor Krashenninikov says this is the real story behind Sunday's wave of protests: the emergence of a new generation of students who played little role in the 2011 protest movement.

These young Russians have grown up with Vladimir Putin as their president, he says, but they don't share the same level of respect for him as their parents.

“For these young people, Putin's not sacred,” Krasheninnikov says. “He's the old guy they show on their parents' television sets. And Kremlin propaganda doesn't work on them.”

Navalny has already announced he's running for president in 2018 — his announcement and campaign organizing run exclusively online — and Krashenninkov says these young Russians are his natural electorate.

Navalny stated as much during his appearance in a Moscow court on Monday.

Less clear is whether Navalny will be allowed to run.

Navalny has faced a series of criminal cases, which he maintains are trumped up to thwart his political ambitions and hurt those close to him. Under Russian law, convicted felons are unable to run for office.

In a phone call with reporters on Monday, Putin’s spokesman Dmitry Peskov insisted the Kremlin was analyzing the scale of Sunday’s protests and accused Navalny of luring young Russians onto the streets with promises of money.

Peskov also defended Moscow riot police — saying they acted “highly professionally” — and Russian state media's coverage of the protests, which was all but nonexistent.

Russian television channels have total editorial independence, Peskov insisted, and they report “what they think is important and meaningful.”

Indeed, on Monday, Russia's State Channel's lead story was about a nasty shift in the weather.

And it was not fake news.

After a spring Sunday, winter was back again — only it may leave Sunday's protesters wondering whether viewers missed the generational shift unfolding before their eyes.