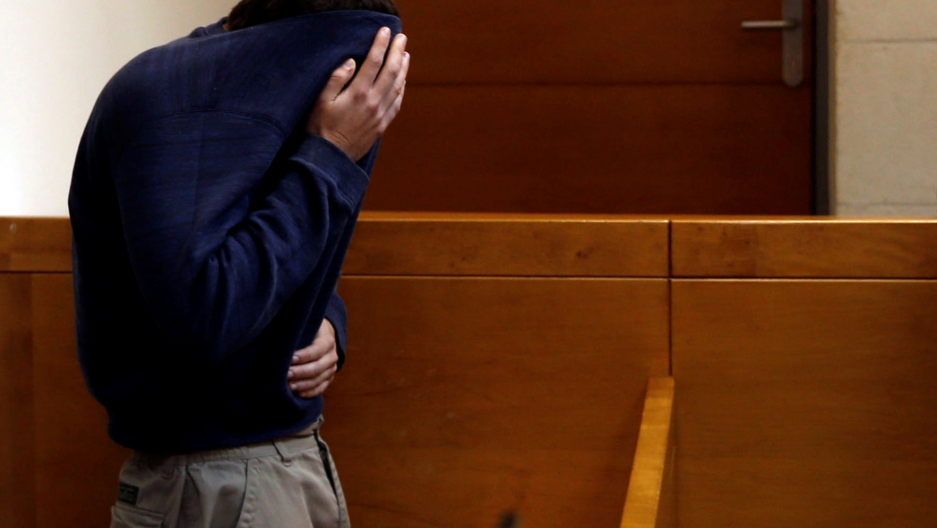 An 18-year-old Israeli who has dual citizenship with the US was arrested in Israel on suspicion of making bomb threats against Jewish community centers in the United States, Australia and New Zealand over the past three months. He is seen here before the start of a remand hearing at Magistrate's Court in Rishon Lezion, Israel.

He's 18. He's Jewish with dual Israeli and American citizenship and lives in southern Israel. But now his home, at least temporarily, is a jail.

The Israeli teenager was arrested Thursday in connection with the dramatic spike in bomb threats against Jewish community centers in the US over the past few months.

"They suspect him of perpetrating more than 100 of those threats," says Ron Kampeas, Washington bureau chief for the Jewish Telegraphic Agency, a global wire service that serves Jewish community newspapers and media. The Anti-Defamation League estimates that since January, there have been more than 150 bomb threats targeting a range of Jewish institutions in the US and Canada. The Israeli teen is also accused of a series of threats made in Europe, Australia and New Zealand in the past six months.

Kampeas says it's telling that the 18-year-old was arrested by Israel's fraud unit. "He spoofed his location using technology that masks his caller ID," he says.

An article in The Daily Beast by convicted computer-hacker-turned-journalist Kevin Poulsen goes into detail about how the teenager used the digital currency bitcoin, Google Voice and a range of other technologies to make himself untraceable — until he made a mistake.

"On one occasion, he forgot to trace his internet connection through a proxy server, and that's what allowed police to trace his IP address," says Kampeas, referring to the identifying code assigned to a computer on a network.

"What's interesting is it seems that the Israelis were brought into this. They started leading the investigation about a month ago. They said they got the information from the FBI, so it sounds like the FBI figured this out, traced it to Israel, and then passed it on to the Israeli national police to pursue," he adds.

Israel intends to indict the teenager but it's not clear whether other countries, including the US, will try to extradite him.

Not a lot is known about the suspect but the Israeli press reports that he is not in the Israel Defense Forces. Nor is he ultra-Orthodox. Kampeas says there may be a medical issue. "His lawyers spoke about a nonmalignant tumor that's nonetheless affecting his behavior so there's that possibility," Kampeas says.

But there's something else that Kampeas believes could have played a role.

"There's also the fact that he was rejected twice by the army. There's so much in the Israeli self-image that's invested in being part of the army. There are so many opportunities that are closed off to you if don't do the army that it was intimated that the resentment at having been twice rejected by the army because of his physical condition might have had something to do with it."

Pressure has been mounting on President Donald Trump to have a more robust response to the bomb threats.

"Nobody ever accused [Trump], of course, of having encouraged this spate of threats. It's more of how he responded to them," Kampeas says. "He kind of left the Jewish community reeling when a Jewish reporter [in February] asked him to address the bomb threats and asked him what he was doing about it, he turned it into an attack on the Jewish reporter.

On Friday, Attorney General Jeff Sessions issued a statement about the arrest of the Israeli teen. "Today's arrest in Israel is the culmination of a large-scale investigation spanning multiple continents for hate crimes against Jewish communities across our country. ... I commend the FBI and the Israeli national police for their outstanding work on this case."