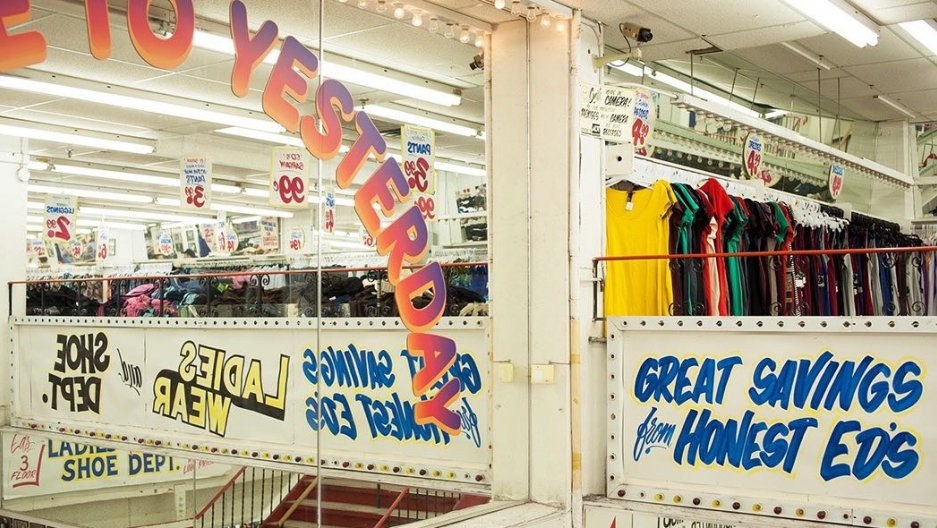 The interior of Honest Ed's in Toronto with its famous hand-painted signage is shown here.

When word spread that Toronto’s legendary Honest Ed’s discount store would close its doors for good in December, 2016, thousands of customers queued up for a chance to purchase a piece of its legacy: the distinctive blue, red and yellow hand-painted paper signs that defined the store’s kitsch aesthetic for decades.

The appeal of the signs, which sold as souvenirs almost as quickly as the discounted merchandise they advertised, lies in their nostalgic value as handmade objects in a universe of mass-produced and computer-generated design. According to the Toronto Star columnist Edward Keenan, “other stores had better stuff, at better prices, but Ed’s had the hand-painted signs.”

Honest Ed’s going-out-of-business sale was not the first time its signs gained widespread attention. In 2011, they were featured at Toronto’s Dominion Modern Gallery, in an exhibition titled “Honest Edwardianism: Hand Painted Signs in the 21st Century.” As the curatorial statement asserts, “this show was put together to illustrate to the graphic arts community and beyond that honest, straightforward, hand-painted signs, though almost extinct, can still be found alive and well.” The exhibit celebrated the handiwork of Doug Kerr — who painted the signs at Honest Ed’s for more than 20 years — and Wayne Reuben, whose tenure lasted almost 50. Kerr and Reuben come from a long tradition of sign painters who specialize in this particular type of “honest, straightforward” paper signs, known in the sign business as show cards. 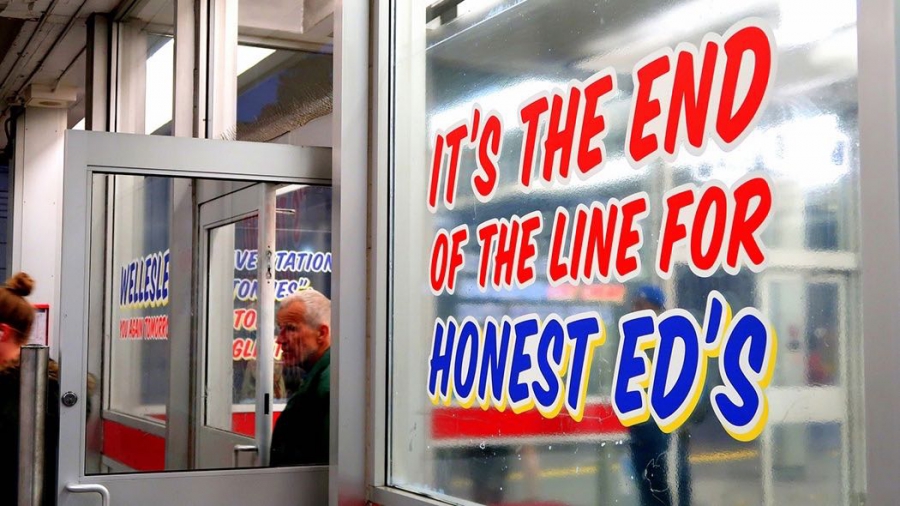 This image shows artwork at a Toronto subway station to celebrate the famous Honest Ed’s store nearby.

The History of the Show Card

Show cards are advertising signs that are hand-lettered on paper or cardstock and placed in shop windows or near displays to promote retail sales or events. An offshoot of sign painting, show-card writing proliferated in the late 19th century and quickly became a ubiquitous marketing tool. Characterized as “that great silent salesman,” early show cards played an important role in the way shops and other businesses presented their wares, drawing the attention of passersby to storefront windows. In the 19th century, businesses were just beginning to use storefront windows as a way to merchandise products.

Before the 1750s, most consumers purchased or traded provisions at local markets. The concept of a modern shop did not yet exist. With the Industrial Revolution, the influx of imported goods from colonized lands, and the introduction of plate glass in the early Victorian era, by the beginning of the 19th century the modern shop began to take shape. This, in turn, led to the need for more advertising and signage. In 1903, when one of the earliest known show-card writing manuals was published, “the show window [had] become the most imposing feature of the store,” and the need for attractive, temporary advertising for rotating window displays became imperative. At a time when national advertising of branded merchandise was in a nascent stage of development, a town’s resident show-card writer served a vital role in the local economy.

Throughout the 18th century, newspapers operated as the primary form of mass communication and, as such, they functioned as the dominant medium for advertising. In the agrarian economy of the pre-Industrial era, most newspaper advertisements announced exclusive events or unique opportunities. As the Industrial Revolution began to take hold in the early 19th century, however, advertising trends began to shift toward a more repetitive mode of promotion that advertised products and events regularly and for longer periods of time. In his article exploring the history of advertising in Britain, the economist Roy Church wrote that “development of advertising from special event to routine activity … may be interpreted as the origin of modern commercial advertising.”

"In retail merchandising, store and window display is second only to the newspaper in its importance as a means of advertising."

As newspaper advertising began to increase, so did the number of shops selling commercial goods. And with advancements in plate glass, shop owners soon began utilizing their storefront windows as the primary means of displaying their products. In his December 1900, article about the various methods of advertising in America, Sidney A. Sherman argued that “in retail merchandising, store and window display is second only to the newspaper in its importance as a means of advertising.”

An author of an early 20th-century show-card writing manual suggested “show cards can be made to strengthen the statements of the newspaper advertisements … This plan also increases interest in the merchandise you advertise, and many times refreshes the memory of the person who has read your ad, recalling to mind the things stated and arousing the curiosity of the one who has not seen the advertisement.” The psychology of repetition in advertising is something we are all too familiar with today. 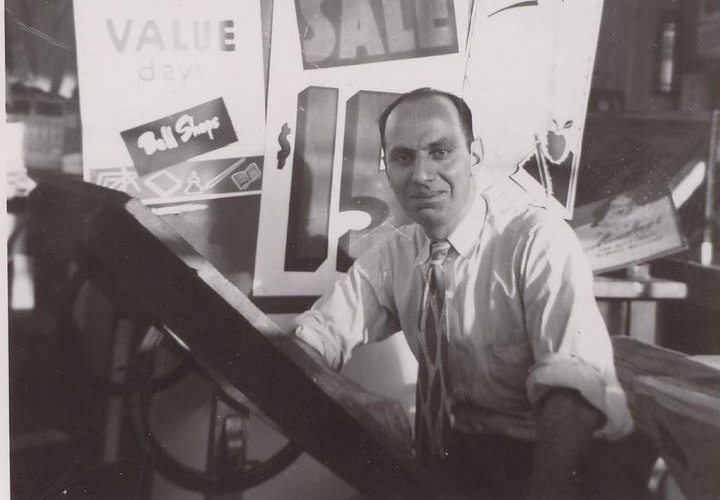 The Role of Show Cards in Branding

While most early 19th-century consumers purchased locally produced goods, technological advancements in transportation and mass production throughout the 19th century helped bring about the concept of a nationally marketed product. With the development of the steam engine, manufacturers were able to distribute their products to shops far from where they were produced. Oftentimes, the manufacturer sent along complementary mass-produced advertising posters and show cards to display alongside the branded goods.

Professor Church believed that “the critical technical breakthrough which accelerated this development was the commercially feasible production of posters by lithography which dates from the 1870s.” Lithography is a printing process that allowed advertisers to mass produce a single design by pressing paper against an image, which is drawn with an oil-based lithographic crayon on a limestone block.

Contests incentivized show-card writers to continue to hone their skills and keep up with competition.

Chromolithography allowed advertisers to reproduce the colors on posters and show cards. The multiple modes of advertising ensured that the public would be continually reminded of the advertised product when it came time to purchase their goods.

Contests incentivized show-card writers to continue to hone their skills and keep up with competition.

Capitalizing on the power of this new form of visual promotion, national retailers often held competitions for show-card writers and offered prizes for designs that would be reproduced as lithographed show cards. An award advertised by the British chocolatiers A.J. Caley and Son was printed in a 1926 issue of the Journal of the Royal Society of Arts. The ad reads:

Messrs. A.J. Caley and Son, Ltd. offer a First Prize of £30, a Second Prize of £15, and a Third Prize of £5 for a Showcard (size 15ins. by 20ins. upright) advertising the firm’s Chocolates. It is not compulsory to include a slogan, but preference will be given, cateris paribus, to a design bearing a good slogan. The card should be in the least possible number of colors, in order that it may be reproduced inexpensively.

While £30 may sound like a reasonable first prize for a show-card writer in 1926, consider the prize Vanity Fair Cigarettes offered in an 1881 issue of The Art Amateur magazine: “$300 for the best and most appropriate design for a show card for cigarettes.” Contests such as these incentivized show-card writers to continue to hone their skills and keep up with competition.

As the design of lithographed posters and show cards advanced in the early 20th century, competition grew for the local show-card writer. As H.C. Martin explained in his 1928 show card manual, “this elevation has been due, to some extent surely, to the betterment of all advertising as exemplified in newspapers, magazines, and outdoor advertising. The many various dealer window … furnished by manufacturers in lithograph and other processes, designed in many cases by skilled artists, have also been influential in raising the standard and in prompting the card man to effect constant improvement.” The early 20th-century hand-lettered show card was a testament to the steadfast ability of the human hand in an era of ever-advancing technologies. 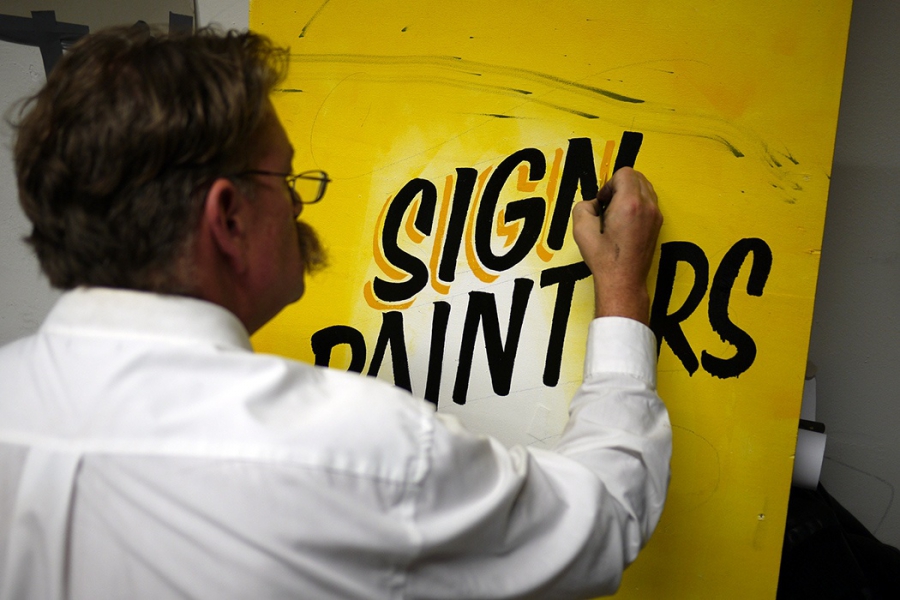 The Legacy of a Tradition

The independent trade of show-card writing became such a profitable and popular profession that, in addition to the opening of countless trade schools around the country, a plethora of instructional books about it were published in the early 20th century. As curatorial assistant at the University of Virginia Library, Elizabeth Ott points out that since show-cards are “ephemeral and rarely preserved, [they] are largely absent from the cultural record, except in photographs that attest to their prevalence. Show card manuals are thus an invaluable resource for understanding the practice of show card writing.” Show-card manuals educated the student on all aspects of the industry, from the proper materials to letter formation, color schemes, and layout.

These manuals even included tips on “suitable wording for show cards” and advice on “keeping up with business trends.” An early 20th-century show-card writer who completed a course in the vocation could expect to acquire several different kinds of work: a salaried employee in a show-card-and-sign-writing firm, a resident show-card writer at a shop or an owner of his or her own show-card writing business.

Show-card writing remained a significant aspect of the sign-painting trade well into the 20th century, despite technological advances in printing. By the 1980s, however, the decline in demand for hand-lettered show cards made show-card writing — as a trade distinct from sign making — a less lucrative business. While the appearance of hand-lettered show cards has steadily waned over the decades — as national brands have come to dominate the market and printing technologies have come to allow for easier and cheaper methods of mass reproduction — show cards and sign paintings are still alive and kicking. Indeed, as evidenced by popular interest in Honest Ed’s hand-painted show cards, it is clear that these signs evoke a certain nostalgia and humanity that computerized, machine-made signs can never arouse. Whatever the future may bring, the history of hand-lettered show cards affirms their role as distinct cultural markers at the dawn of modern advertising.

This story is from JSTOR Daily.