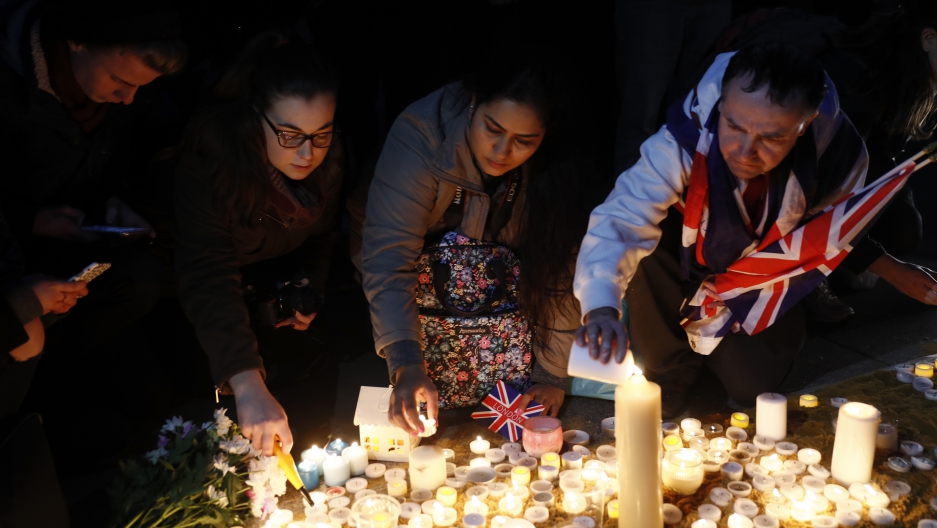 People light candles at a vigil in Trafalgar Square the day after an attack, in London, March 23, 2017.

Hundreds of people paid tribute in central London on Thursday to the victims of a terror attack outside British Parliament a day earlier that left five dead including a police officer and the attacker, and dozens injured.

London Mayor Sadiq Khan led the tributes in a heavily policed Trafalgar Square, vowing "Londoners will never be cowed by terrorism" after a 52-year-old UK-born man went on the rampage at Westminster.

"The victims were people who came from all corners of our world," he added.

The victims were reported to include an American man, a British woman of Spanish origin and a London policeman.

Parliament held a minute of silence to honor the dead.

Standing alongside Home Secretary Amber Rudd and Craig Mackey, the acting commissioner of London's Metropolitan Police, Khan lit a candle in an act mirrored by the crowds gathered in the famous square.

A man draped in Britain's Union Jack flag was among those lighting candles placed on sand, while others left flowers in the square.

Messages of defiance were brought to the vigil, including a "Hate will not divide us" sign held by a member of the public and "We are not afraid" written on the ground.

'We will carry on'

Retiree Wendy Scott was among the hundreds of people who came to Trafalgar Square to express her solidarity with victims of the attack.

"We will carry on," she told the Agence France-Presse, before laying a bunch of daffodils in the square.

Naveed Mirza, a Muslim student, said he had received "overwhelming" support since the attack described by police as "Islamist-related terrorism".

"We have come to say how, as Muslims, we unequivocally condemn all the violent actions that took place yesterday," he told AFP.

"People have been coming to us, they have been very supportive telling us we should have nothing to fear," Mirza added.

ISIS claimed one of its "soldiers" was behind the attack.

The Metropolitan Police held a meeting of faith leaders on Thursday to discuss how to tackle "the discord, distrust and fear that terrorists seek to create."

Police officers in Trafalgar Square were approached by numerous people who offered their condolences for their colleague who was stabbed to death outside Parliament.

"I told them I'm sorry for your loss and we stand by you for your work," said Anne-Marie Wilson, a 53-year-old charity worker.

"They have lost a brother, it could have been any one of us," she told AFP.

Masood intially drove across Westminster Bridge, ploughing into pedestrians before crashing the car and stabbing police officer Keith Palmer, before being shot by police.

Forty people were injured in total, including one person battling life-threatening injuries and five in a critical condition.

London pride on the air

Veteran BBC Radio London broadcaster Robert Elms opened his show with a special message for city as a whole. "I'm so proud of this city," he said. "This is a wise, grown up, big city. We're not a place of panicers, or overreacters. We're londoners. All of us, in our many forms and our different ways, pull together in a time like this."

Elms went on to say that, for him, the attack was horrific, but not surprising. And it also would not change the spirit of the city.

"There is slight calm that prevails on a day like this, if anything," he said. "Because people know that it's a serious day, and serious business has to go on. And that's what London does. It gets on with it." 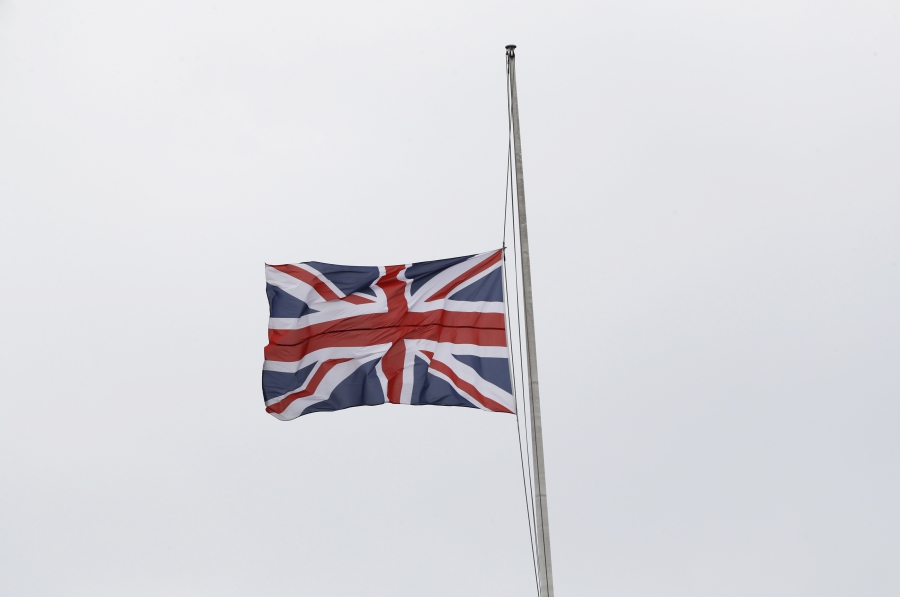 The Union flag flies at half-staff in Parliament Square the morning after an attack in London, Britain, March 23, 2017.